The US yield curve, as indicated by the spread between the 10-year and 2-year T-Note yields, made a new 10-year extreme over the past fortnight, meaning that it recently became the "flattest" it has been in more than 10 years. While this may indicate that the boom is nearing its end, it definitely indicates that the transition from boom to bust has not yet begun.

The following chart highlights the last two major reversals of the US yield curve from flattening to steepening. These reversals were confirmed about 6 months prior to the recessions that began in March 2001 and December 2007 respectively.

The fact that the yield curve is still hitting new extremes in terms of "flatness" suggests that the next US recession will not begin before 2019. 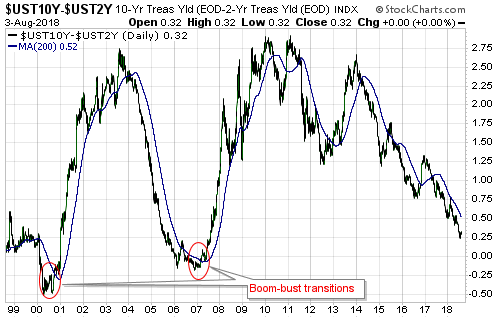 The above is essentially a repeat of what I've written in the past, but an additional point warrants a mention. The additional point is that while it would be almost impossible for the US economy to transition from boom to bust without a timely reversal in the yield curve from flattening to steepening, there is a realistic chance that the next yield curve trend reversal from flattening to steepening will not signal the onset of an economic bust/recession. That's why I do not depend solely on the yield curve when determining recession probabilities.

The reason that the next yield curve trend reversal from flattening to steepening will not necessarily signal the onset of an economic bust/recession is that there are two potential drivers of such a reversal. The reversal could be driven by falling short-term interest rates or rising long-term interest rates. If it's the former, it signals a boom-bust transition, but if it's the latter, it signals rising inflation expectations.

As an aside, regardless of whether a major yield curve reversal from flattening to steepening is driven by the unravelling of an artificial boom or rising inflation expectations, it is bullish for gold. By the same token, a major reversal in the yield curve from steepening to flattening is always bearish for gold.

With the T-Bond likely to strengthen for at least the next two months, there is little chance that rising long-term interest rates will drive a yield curve reversal during the third quarter of this year, but it's something that could happen late this year or during the first half of next year.

Steven Saville
1.49K Followers
I graduated from the University of Western Australia in 1984 with a degree in electronic engineering and from 1984 until 1998 worked in the commercial construction industry as an engineer, a project manager and an operations manager. I began investing in the stock market 2 months prior to the 1987 stock market crash and thus quickly learned about the downside potential of stocks. Only slightly daunted by the rather inauspicious timing of my entry into the world of financial market investments, my interest in the stock market grew steadily over the years. In 1993, after studying the history of money, the nature of our present-day fiat monetary system and the role of banks in the creation of money, I developed an interest in gold. Another very important lesson soon followed: gold may be the ideal form of money for those who believe in free markets and a wonderful hedge against the inherent instability of the government-imposed paper currencies, but it is not always a good investment. By mid-1998 the time and money involved in my financial market research/investments had grown to the point where I was forced to make a decision: scale back on my involvement in the financial world or give up my day job. The decision was actually quite an easy one to make and so, at the beginning of 1999, I began investing/trading on a full-time basis. My major concern in deciding to pursue a career in which I devoted all of my time to my own investments was that I would miss the personal interaction that had been part and parcel of my business management career. The Speculative Investor (TSI) web site was launched in August of 1999 as a means for me to interact with the world by making my analysis/ideas available on the Internet and inviting feedback from others with similar interests. During its first 14 months of operation the TSI web site was free of charge, but due to the site's growing popularity I changed it to a subscription-based service in October of 2000. Its popularity continued to grow, although I remained -- and remain to this day -- a professional speculator who happens to write a newsletter as opposed to someone whose overriding focus is selling newsletter subscriptions. My approach is 'top down'; specifically, I first ascertain overall market trends and then use a combination of fundamental and technical analysis to find individual stocks that stand to benefit from these broad trends. This approach is based on my experience that it's an order of magnitude easier to pick a winning stock from within a market or market sector that's immersed in a long-term bullish trend than to do so against the backdrop of a bearish overall market trend. Fortunately, there's always a bull market somewhere. I've lived in Asia (Hong Kong, China and Malaysia) since 1995 and currently reside in Malaysian Borneo.
Follow
To ensure this doesn’t happen in the future, please enable Javascript and cookies in your browser.
Is this happening to you frequently? Please report it on our feedback forum.
If you have an ad-blocker enabled you may be blocked from proceeding. Please disable your ad-blocker and refresh.