As expected, the risk of a national recession beginning in the United States at some time in the next twelve months has increased by 0.3% over the last six weeks. As of Thursday, August 2, 2018, the day after the Fed's last two-day meeting, the risk of a recession beginning sometime between 2 August 2018 and 2 August 2019 stands at 1.1%, which is roughly a 1 in 91 probability.

That small increase to a still very low level is mainly attributable to the Fed's recent series of quarter-point rate hikes, where its most recent was announced on June 13, 2018. Meanwhile, a small narrowing of the U.S. Treasury yield curve has taken place, as measured by the spread between the yields of the 10-year and 3-month constant maturity treasuries, has also made a small contribution toward the perceptible increase in future recession risk during the last six weeks.

For those playing the recession watch game at home, the Recession Probability Track visualizes how the risk of recession has slowly risen to the level we recorded on August 2, 2018. 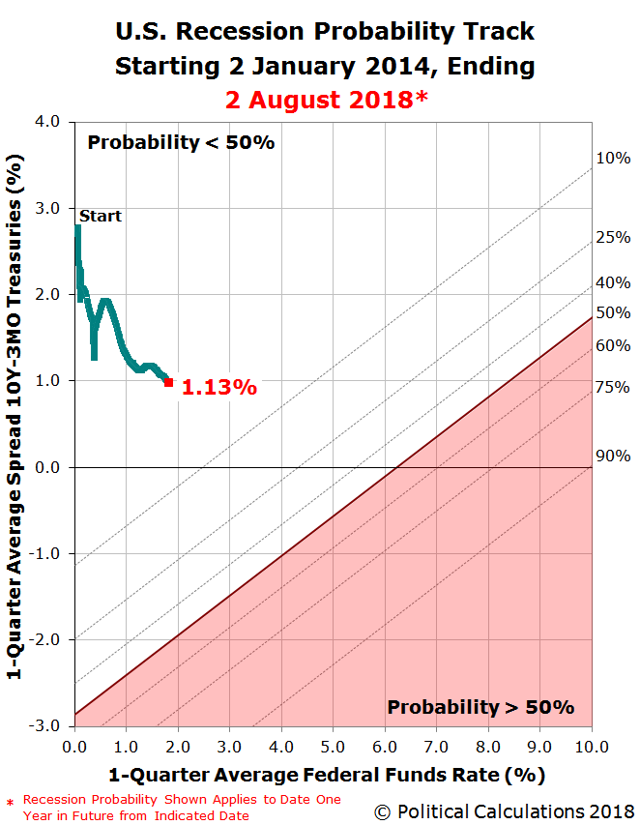 We anticipate that the probability of recession will continue to rise through the end of 2018, since the Fed is expected to hike the Federal Funds rate again in September 2018. As of the close of trading on Friday, August 3, 2018, the CME Group's Fedwatch Tool was indicating a 96% probability that the Fed will hike rates by a quarter percent to a target range of 2.00% to 2.25% at the end of the Fed's next meeting on September 26, 2018. Looking forward to the Fed's 19 December 2018, the Fedwatch Tool is currently indicating a 69.4% probability of another quarter-point rate hike being announced before the end of the year.

After that, it looks like the Fed might take a breather in announcing further rate hikes, perhaps until the conclusion of its June 2019 meeting.

Ironman at Political Calculations
2.23K Followers
Ironman is the alias of the blogger at Political Calculations, a site that develops, applies and presents both established and cutting edge theory to the topics of investing, business and economics. We should acknowledge that Ironman is either formerly or currently, and quite possibly, simultaneously employed as some kind of engineer, researcher, analyst, rocket scientist, editor and perhaps as a teacher of some kind or another. The scary thing is that's not even close to being a full list of Ironman's professions and we should potentially acknowledge that Ironman may or may not be one person. We'll leave it to our readers to sort out which Ironman might behind any of the posts that do appear here or comments that appear elsewhere on the web!
Follow
5 Comments
To ensure this doesn’t happen in the future, please enable Javascript and cookies in your browser.
Is this happening to you frequently? Please report it on our feedback forum.
If you have an ad-blocker enabled you may be blocked from proceeding. Please disable your ad-blocker and refresh.