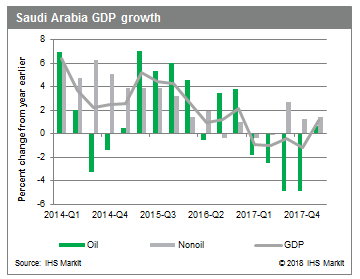 Saudi Arabia's oil sector provided a lift to headline GDP growth during the first quarter, even as oil production was restrained under its original quota of 10.058 million barrels per day (MMb/d) under the previous OPEC agreement, prior to the Vienna Alliance's decision to raise OPEC and non-OPEC production quotas.

Non-oil activity in the kingdom edged higher during the first quarter as well, with non-oil GDP growth at a 1.4% annual rate, according to GASTAT. However, for the key sectors, the performance was mixed.

We project Saudi Arabia's economy to grow more strongly in the second to fourth quarters of 2018. Following positive first-quarter growth, we expect the Saudi economy to further strengthen thanks to the Vienna Alliance's decision to raise OPEC and non-OPEC production quotas and higher global oil prices. The increase in OPEC quotas under the revised Vienna Alliance agreement will lead to stronger growth in oil GDP over the coming quarters, while higher prices will also boost non-oil growth through increased spending and investment.

Risks to Saudi Arabia's economy will continue to center on uncertainties regarding the oil market and price outlook, as well as progress with efforts to diversify the economy away from oil, and global financial conditions. Another key risk apart from oil will be the execution of capital projects. With Saudi Arabia retooling parts of its National Transformation Program (NTP) 2020 plans associated with Vision 2030 last October, progress in executing capital projects has been slower than expected and reflected in the poor performances in the construction, trade/restaurants/hotels, and transportation/communication sectors.

The authorities have moved to ease fiscal consolidation in the 2018 budget, and we continue to expect budget execution regarding capital expenditures to further improve in the coming quarters, providing underlying support to non-oil activity in 2018. Targeted infrastructure and development projects will help stabilize and strengthen the construction, manufacturing, trade, and transportation sectors. However, should public spending and investment be less robust than targeted in 2018, non-oil activity could be weaker than expected, dragging headline GDP growth back closer to the lower 2% range.

Markit
2.29K Followers
IHS Markit (Nasdaq: INFO) is a world leader in critical information, analytics and solutions for the major industries and markets that drive economies worldwide. The company delivers next-generation information, analytics and solutions to customers in business, finance and government, improving their operational efficiency and providing deep insights that lead to well-informed, confident decisions. IHS Markit has more than 50,000 key business and government customers, including 80 percent of the Fortune Global 500 and the world’s leading financial institutions. Headquartered in London, IHS Markit is committed to sustainable, profitable growth.
Follow
To ensure this doesn’t happen in the future, please enable Javascript and cookies in your browser.
Is this happening to you frequently? Please report it on our feedback forum.
If you have an ad-blocker enabled you may be blocked from proceeding. Please disable your ad-blocker and refresh.