Over the weekend, JPMorgan’s (JPM) CEO Jamie Dimon was quoted as saying he believed 10-year treasury yields should be 4% and warned that 5% is a definite possibility that investors need to prepare for.

When the CEO of one of the largest banks and brokerage firms in the country makes such a strong statement about the direction of bond yields, investors take notice. Mr. Dimon had previously commented that the “natural rate” for the ten-year bond should be 4%, presumably composed of 2% inflation and a 2% “real” rate above and beyond inflation. With 10-year treasuries hovering just below 3%, and using a 2% real rate as sufficient return for taking the risk of holding a 10-year security, implies the market is effectively pricing in roughly 1% inflation over the next decade.

The U.S. treasury market doesn’t operate in isolation and global government bond yields remain historically very low. This is largely driven by stubbornly low inflation around the world, despite the attempts of global central bankers to reignite inflation. I have included a chart of various global bond yields, the developed markets in this graph yield significantly less than U.S. treasuries and even Chinese 10-year yields are only around 3.5%. 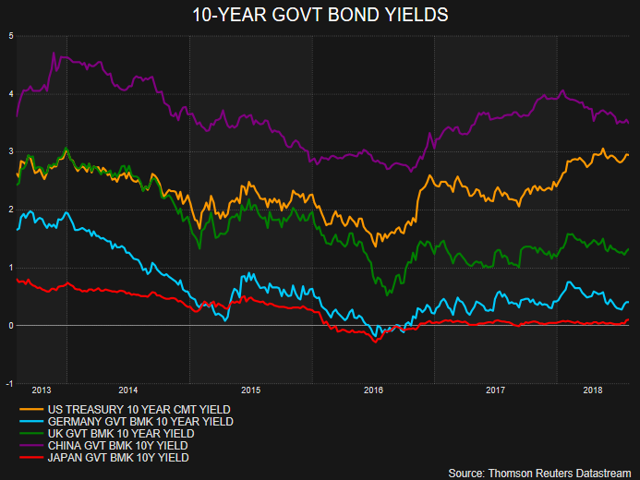 If the U.S. 10-year immediately rose to 4%, it would yield more than the equivalent Chinese 10-year and dramatically more than other developed markets. This doesn’t make sense to me, unless the U.S. was on the verge of a dramatic spike in inflation, which seems very unlikely.

For example, for most of the past 25 years, core consumer prices (CPI ex-food and energy) have consistently oscillated around the 2% level. This low level of inflation seems to surprise most investors, who mistakenly believed inflation was considerably higher for most of this period. 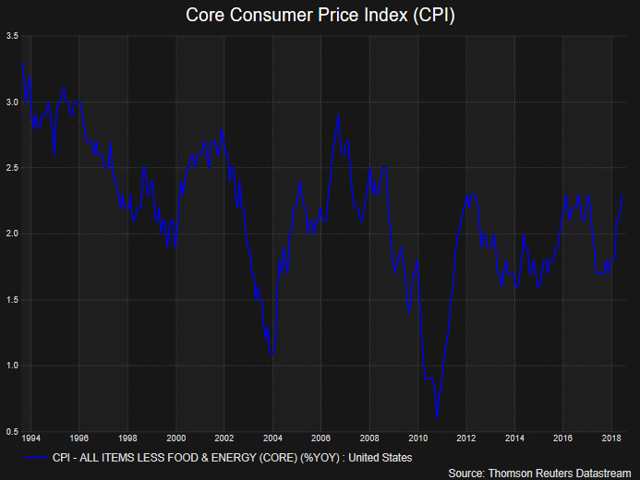 This period also coincides with the fall of the Soviet Union, the ascent of China and the beginning of the ever-expanding globalization period we are in today. Globalization and aging demographics in the developed world are structurally deflationary and argue for a continuation of modest inflation over the medium-term. If one were to assume the onset of a recession in the next few years, it is not hard to image the inflation shocks could very well be to the downside instead of the upside, with deflation becoming a serious threat as it was during the last recession.

U.S. investors are often myopic, narrowly focusing on just the U.S. economy in isolation and not fully accounting for the globalized nature of the world today. Even though Mr. Dimon is very worldly, he may have gotten caught up in this myopic view, in addition to anchoring to a past inflation regime that is no longer valid.

The U.S. economy is nearly 10 years removed from the last recession and signs of an economy near its peak are all around us. For example, the extremely low unemployment rate, elevated levels of corporate debt, the flat yield curve and the interest rate cycle itself all point to late economic cycle dynamics.

Recessions tend to be caused by Fed over-tightening and the Fed has been in tightening mode much longer than many investors realize. The graph below plots the 10-2 treasury yield curve spread (blue), the Fed Funds rate (yellow, right-hand scale) and the Fed Funds Shadow Rate (green, right-hand scale). The Fed Funds Shadow Rate shows the level of monetary accommodation (multiple rounds of QE, Operation Twist, etc.) once the Fed Funds rate hit zero. This series has since been suspended once the Fed began raising interest rates off the zero level. 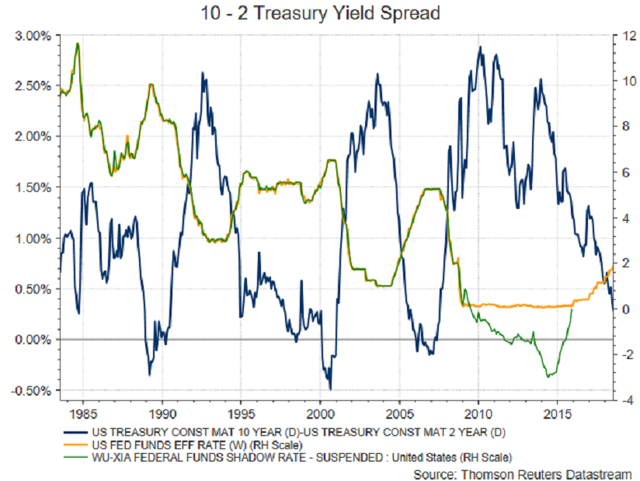 Based on the shadow rate, the interest rate cycle bottomed in mid-2014 at an implied -3%. Monetary policy has now tightened by roughly 500 basis points over the past four years. Compared to prior interest rate cycles over the past 35 years, this is an unusually large adjustment and unmatched over this period of time. It is also clear from this chart that the global financial crisis required a level of monetary easing that was unmatched in the modern era. From 2007 through 2014, the Fed cut interest rates and eased monetary policy by a cumulative 825 basis points.

During prior interest rate hiking cycles, the yield curve narrowed and eventually inverted as the Fed pushed through with cycle ending rate hikes. With the Fed on track to raise interest rates two additional times in 2018 and possibly even more in 2019, the yield curve will likely follow a similar path to prior cycles and invert at some point over the next 6-12 months. An inverted yield curve tends to lead recessions by roughly 12 months and if this were to occur it would give us our first definitive signal that a recession is on the horizon.

For market participants who closely watch the market, when indications are the Fed will slow its rate hike path, long-term bond yields rise and equities rally. This is counter-intuitive for many investors, but the financial markets are clearly implying that the Fed is tightening too much and/or too fast and is threatening the economic outlook. This market behavior is inconsistent with the thought that Fed action will drive long-term rates higher, in fact just the opposite is likely to occur.

The market is viewing the current inflation environment as “peak inflation” and looking past the near-term economic strength. The market views continued Fed tightening as likely to invert the yield curve and eventually push the economy into a recession. Taking all these factors into account, 4% yields on the 10-year treasury appear to be a low probability event and 5% yields would imply a scenario of sustained 3% inflation, which hasn’t happened in the last 30 years. In my opinion, now is not the time to be bearish on 10-year treasuries, in fact somewhat counterintuitively now is the time to be bullish.

John Derrick, CFA
110 Followers
I have 18 years’ experience as an institutional portfolio manager and 25 years in the investment management industry. In a wide-ranging investment career, I have managed a wide variety of mutual funds, including money market funds, municipal bond funds, U.S equity and emerging market equity funds. I have also had portfolio management responsibilities for a U.S. equity and an international equity separately managed account (SMA). This diverse background gives me a somewhat unique perspective on opportunity and risk.