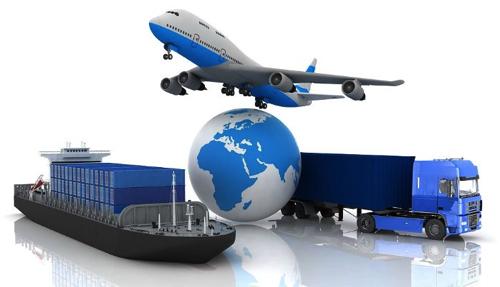 The Brazilian economy pays a price in terms of productivity foregone because of its lack of trade openness. A trade opening process would bring an adjustment impact that could nonetheless be mitigated with public policies that facilitate labor mobility and job migration. Benefits from trade opening would also hinge on policy improvements in complementary areas, such as infrastructure investments, business environment and others.

The Brazilian economy would benefit from opening trade…

The Brazilian economy is commercially closed (Canuto, Fleischhaker and Schellekens, 2015a). Consider, for example, tariffs on imports. Weighted by import shares, the average was 8.3% in 2015, the highest among comparable emerging and advanced economies (Dutz, 2018). Such tariff protection in Brazil is accompanied by the use of non-tariff barriers and local content rules that are also/even more intense than in those comparable countries (Chart 1). The number and depth of free trade agreements to which Brazil is a signatory are also limited. 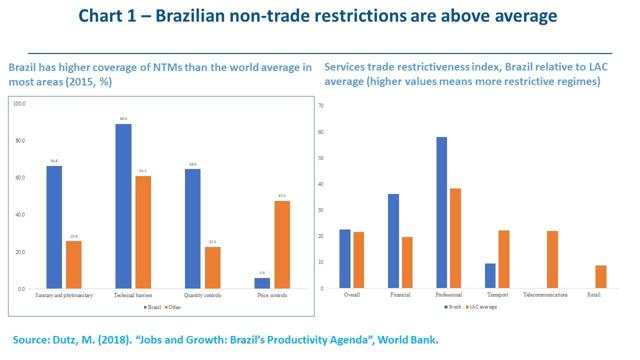 Not surprisingly, Brazil maintains a degree of density in its domestic industrial production chains above what one should expect from its level of income and development (Canuto, 2014). Before assuming this is inherently benign, note that by abdicating more advanced and externally available inputs, equipment and technologies, such integrated chains operate at lower levels of productivity and quality than would have been the case if they had access to said inputs. Leaner and outward integrated producer chains would have greater capacity to export and to provide domestically better and cheaper products, while at the same time, their expansion could outweigh the lower domestic density.

It is also not by chance that, while in Norway there is one exporting company for every 250 Norwegians, in Brazil the proportion is one for every 10,000 Brazilians (Canuto, Fleischhaker and Schellekens, 2015b). Restrictions on imports function as export taxes, preventing the accrual of economies of scale in the foreign market.

Embraer, Petrobras (before being subjected to heavy commitments of local content after the discovery of pre-salt layers of deep-sea oil) and agriculture are examples of Brazilian successes that constitute exceptions confirming the rule above. The fear of loss of local production segments with high technological content must be countered by the fact that their domestic survival due to protection steroids does not necessarily mean local technological dominance, and must not be done while imposing a burden on others (Canuto, Cavallari and Reis, 2013). A cheapening of the basket of goods may well mean lower wages and intermediary costs for those areas where the country can develop local capacity for value added generation (Canuto, 2015).

Therefore, the Brazilian economy suffers from high costs because of its trade closure. What the country produces could be done with greater productivity and competitiveness, even if it abdicated to do internally what it would import if it could have access to the best and most advanced equipment and technology. Incidentally, recent historical experience shows that countries that are not at the technological frontier and those that are both have better results in terms of local technological innovation when they can benefit from access to external sources of knowledge, including via imports of goods and services (Canuto, 2018).

But following the protectionist measures triggered by the Trump government, wouldn’t it be more convenient to have a closed economy in the current global context of trade war? It should be emphasized that the burden of lost productivity and quality falls on the Brazilian economy itself. In addition to direct import and export channels, trade closure contributes to the low intensity of competition in many domestic markets, which in turn helps to explain why the survival of less efficient firms is proportionally larger in Brazil than again in comparable economies.

In most sectors, Brazil presents high degrees of heterogeneity in the productivity of companies, with the survival of less efficient companies higher than in many other countries (Chart 2). Goods and services available in the country are more expensive and of lower quality than they could be, as avenues for innovation and productivity increases remain narrow. The average productivity is lower than what would prevail if market slices and resources could be absorbed by the most efficient companies. Brazilian commercial closure thus has a deleterious effect by reducing the strength of competition between firms and hence allowing capital and human resources to remain in inefficient firms. Average productivity would be greater if they were reallocated to better companies. 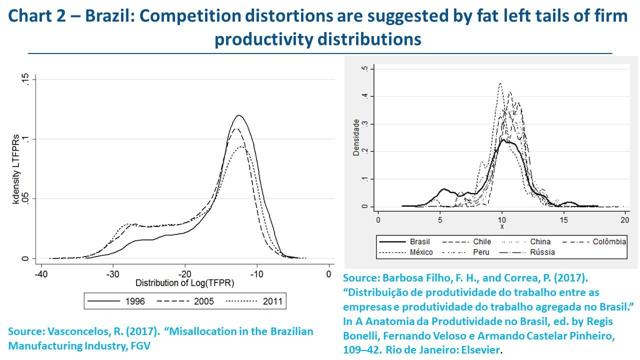 … but attention must be paid to differentiated regional and social impacts

While acknowledging potential benefits from opening Brazil’s trade, one cannot neglect the frictions and shocks that would accompany any such process. The strengthening of beneficiary activities and jobs would take place in tandem with direct negative impacts of such opening on fragile ones. Total gains would not be evenly distributed across regions and income strata, making it imperative to adopt complementary policies to facilitate labor mobility, retraining and the generation of new jobs. However, with compensation and minimization of the adjustment burden, gains greater than losses could offset the shock caused by the opening up, because the alternative would be to maintain the status quo.

These issues have been approached in a recent research disclosed by the Special Secretariat for Strategic Affairs of the Brazilian Presidency of the Republic (SAE-PR). In addition to simulations on the evolution of prices of goods and services and the composition of employment, the study analyzes the different regional impacts of a hypothetical elimination of all tariffs applied on imports in the country. In addition, it discusses public policies aimed at mitigating the costs of adaptation during the transition.

For example, the survey estimates that, because of access to lower-priced machines and inputs combined with the competitive pressure made possible by the opening, the overall price level would fall by around 5% in real terms. As might be expected, prices would fall especially in sectors that are today the most protected: cars, machinery, leather, textiles and clothing would have prices between 6% and 16% lower. It should be noted that these estimates do not incorporate potential productivity gains from learning to handle more advanced technologies which are now curtailed by tariff and non-tariff barriers to imports.

Throughout the period after liberalization, cumulatively in up to 20 years, 75% of the sectors of the Brazilian economy would increase employment, while only three sectors - leather, textiles and clothing - would suffer a fall in employment above 0.5%. Although imports would obviously rise, falling costs would lead to greater export capacity even in those sectors most directly affected by the opening - including garments and textiles.

On the other hand, the research finds potential differentiated regional impacts from the opening, due to the geographic concentration of the analyzed sectors. The most affected microregions would be those with production that is more dependent on high tariffs (Chart 3). In the case of larger cities, the simultaneity of destruction and creation of jobs in distinct sectors would give more room for the occupational migration of workers. The SAE-PR study estimates the reallocation of labor during the adjustment to openness as something reaching about 3 million workers in the country. 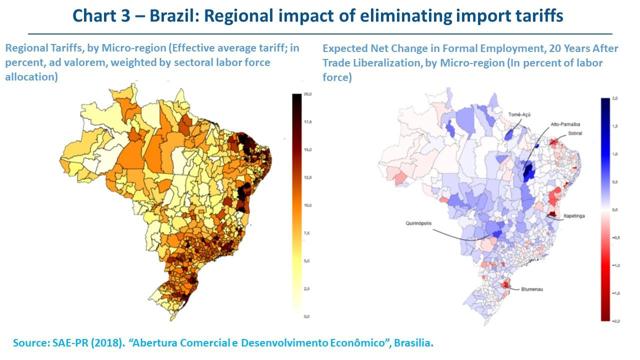 In this context, the SAE-PR report emphasizes the relevance of labor market policies to facilitate the transition, particularly public policies that recover or increase the employability of workers initially impacted by the trade shock. It observes how this could occur through changes and improvements in existing policies, something that can be done at the infra-legal level and, therefore, as something that could be taken care of with unilateral action by the executive branch. By considering information on which regions would be most affected, which sectors would tend to expand or shrink, and which skills would be demanded, it would be possible to tune the offer of requalification to demand and, thus, facilitate the productive reintegration of workers.

There is scope for trade opening

Lack of competition and poor productivity performance have domestic reasons that go beyond external trade closure: low investment in infrastructure; unfriendly business environment; distortions in long-term financing; quality of public spending on education; etc. Changes in these areas would be a precondition for benefits of greater trade integration to be fully realized - but these improvements are already necessary by themselves (Canuto, 2016). Instead of corporate supportive policies to compensate for competitive disadvantages resulting from the burden of those aspects and other goals – policies whose fiscal cost was estimated at 4.5 percent of GDP and 9 times the expenditures on conditional cash transfers in 2015 (Dutz, 2018) - it would be necessary to adopt policies aimed at raising productivity and smoothing worker relocation processes.

In addition to the agenda of overcoming those domestic impediments to greater competition and increased productivity, much can be done in trade policy even without a global scenario favorable to unilateral gestures. Even without full elimination of import tariffs, with early announcement and gradualism, the Brazilian tariff structure in force can be simplified by reducing the number of tariff levels and the costs of importing intermediate goods and capital, which would result in lower peaks in effective protection rates. Existing local content requirements may be revisited. The tax burden on exports - including tax credits due - can be mitigated. Restrictions and high taxes imposed on imports of financial and professional services that serve as key inputs to production and export can be alleviated.

It should be noted that, without conflicting with the rules prevailing in Mercosur, there is room currently available for that - which does not, of course, exclude additional initiatives to reduce non-tariff barriers between members and joint tariff barriers vis-à-vis third countries. In addition to the agreement between Mercosur and the European Union whose negotiation is under way, other potential bilateral partners - Pacific Alliance, Canada and others - can be sought.

Simulations by Dutz (2018) suggest that, in the event of alignment of non-tariff barriers with Mercosur member countries and a 50% drop in tariffs relative to countries outside the regional bloc, almost 6 million Brazilians could surpass the poverty line of $5.50 per day. As pointed out, total gains would not be evenly distributed across regions and income strata, making it imperative to adopt complementary policies to facilitate labor mobility, retraining and the generation of new jobs. Either way, it is always easier to offset losses and distribute earnings when there are gains. After all, one must consider that extending the status quo will mean the extension of the costs currently embedded in the country's trade closure.

Otaviano Canuto is an Executive Director of the World Bank. The opinions expressed in this article are his own.

Otaviano Canuto
461 Followers
Otaviano Canuto, based in Washington, D.C area, is a senior fellow at the Policy Center for the New South, professor at George Washington University, principal of the Center for Macroeconomics and Development and a non-resident senior fellow at Brookings Institution. He is a former vice-president and a former executive director at the World Bank, a former executive director at the International Monetary Fund and a former vice-president at the Inter-American Development Bank. He is also a former deputy minister for international affairs at Brazil’s Ministry of Finance and a former professor of economics at University of São Paulo and University of Campinas, Brazil.He has authored and co-edited 8 books and over 160 book chapters and academic articles, and is a frequent contributor to numerous blogs and periodicals.
Follow