For a couple months now, I've been opining that this is not the time to have one's foot to the floor in their portfolio. I've even gone so far as to say that some caution is warranted. And what has Ms. Market done in response? Push toward all-time highs, of course!

Don't look now fans, but despite the fact that you are likely busy with the kids at the beach or traveling abroad, the S&P 500 is within a stone's throw (14.4 points or 0.5% to be exact) of that frothy top set back on January 26th. Yep, that's right, it has taken six months, but the S&P is knocking on the door of all-time highs and may be ready to break on through to the other side of this long consolidation phase.

Take a peek at the weekly view of the S&P 500 below. The bulls contend that it will be onward and upward from here. Of course, our furry friends in the bear camp suggest that overhead resistance is about to bite and that another trip through the range is the next order of business. 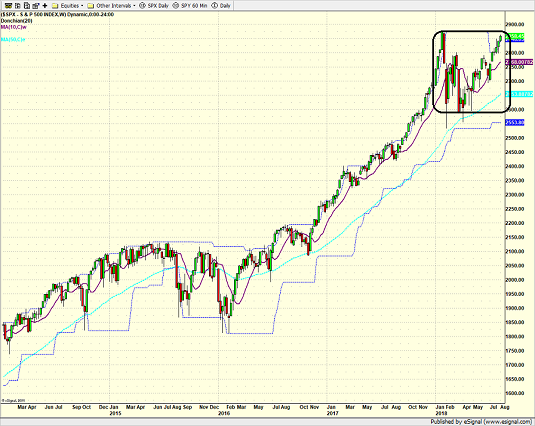 As longtime readers know, I don't play the prediction game. No, I prefer to stay in tune with prevailing conditions and leave the prognostications for the folks on TV.

But with prices near all-time highs and my models suggesting some caution is in order, it would appear that it's decision time for the market.

To review, some of my favorite market models (some of which I've been working with since the mid 1990's) are not exactly in their happy places. As Exhibit A, I re-present this week's "Primary Cycle Indicators" board, which contains longer-term models designed to identify the current "state of the market." 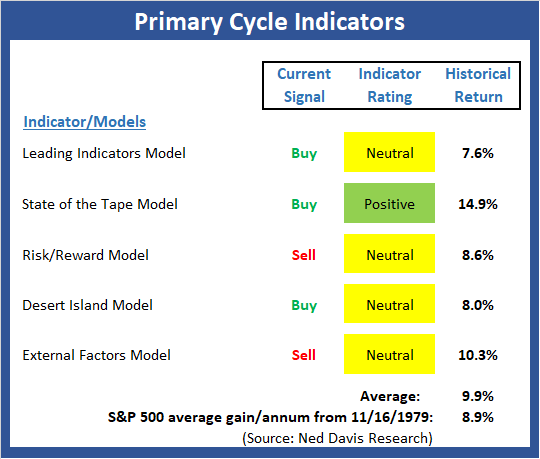 I wrote on Monday, "With two of my favorite longer-term, big-picture market models still on sell signals, I reserve the right to remain a bit cautious."

I was referring to the Risk/Reward and External Factors models, both of which are currently neutral but remain on "sell signals." And the bottom line is I would feel a whole lot better if all five of these models sported green rating boxes and "buy" signals.

The good news is that the "State of the Tape" model is still in good shape and my "Desert Island" model says to remain seated on the bull train.

To be fair, none of these longer-term models are very good at providing short-term signals. No, these models are intended to identify which team has the ball. So, my takeaway has been that it is a bull market until proven otherwise - but that some caution is warranted.

What Do The Cycles Say?

As I mentioned above, I don't believe in managing money based on market calls or predicting what is going to happen next in Ms. Market's game. However, I do believe that markets travel in cycles and that more often than not, stocks tend to follow seasonal patterns.

It is for this reason that I pay attention to Ned Davis Research's Cycle Composite on a weekly basis. As a reminder, the cycle composite combines all the 1-year seasonal, 4-year Presidential, and 10-year decennial cycles since 1928. What I've learned is that when the market is "in sync" with the cycles, the projection from the cycle composite can be scary good - and help one prepare for what "might" come next. 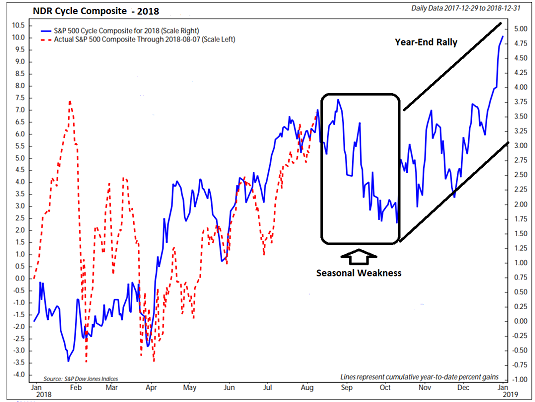 As you can see, the stock market (red dashed line) was VERY out of sync with the cycle projection in January. But since early February, the projection of the general trend has been pretty good.

The question, of course, is with stocks perched at key technical levels, what might we expect to see next?

From a big-picture standpoint, the cycles say those looking for a breakout to the next leg higher will be disappointed in the near-term but rewarded in the intermediate-term. If the cycles hold, we should expect the current trading range continue for a while as the late-summer/early fall seasonal weakness sets in. But then as the fall turns to winter, the traditional "year-end" rally should show up - eventually, in a choppy fashion.

Here's my take. Stocks are near all-time highs, but the market is now overbought, into resistance, and the bulls haven't shown much oomph. My favorite market models are currently less than enthusiastic. And the cycles suggest a period of sloppy action is about to begin. But with earnings rolling along and the economy "doing just fine, thank you," the bulls have been able to hang in there.

So... I think the answer is that while it's okay to continue to lean bullish, this isn't a terrible time to play the game more cautiously than normal - for awhile, anyway.

Publishing Note: My next report will be published Monday morning.

"In preparing for battle I have always found that plans are useless, but planning is indispensable." - Dwight D. Eisenhower