Tesla’s (NASDAQ:TSLA) sole straight bond (5.3% semiannual coupon, maturing Aug. 15, 2025) trades at junk bond yields. If a leveraged buyout is feasible, then this bond will be part of the financing package and/or (depending on covenants) will need to be repaid early. In any case, an LBO doesn’t make sense if Tesla won’t be in business in 2025.

So do bond traders think it's possible? No. As of August 7, “B” bonds yielded 6.36%. Tesla’s bond remains firmly in junk territory, trading at nearly a 100 bp premium.

Now as per a previous article (Tesla's Bond: More Junk Than Tesla), that premium has exhibited an inverse relationship since the March 27, 2018, downgrade by Moody’s of Tesla’s debt. Indeed, a regression found that a $1 increase in the stock price (relative to a base of $305) translated into a 1 bp drop in the yield relative to “B” bonds. By that rule of thumb, the bond yield ought to yield no more than it did at the stock's previous June 18 high. That implies bonds should trade at or above 92. If bond markets really thought the deal would go through, even that price is too low – it should be trading at 98 or above.

Of course the same logic applies to Tesla's stock. If there's really to be an LBO at a price of $420, then shares should keep moving in that direction. As of pixel, however, the price is at $372, down $10 from yesterday's high. 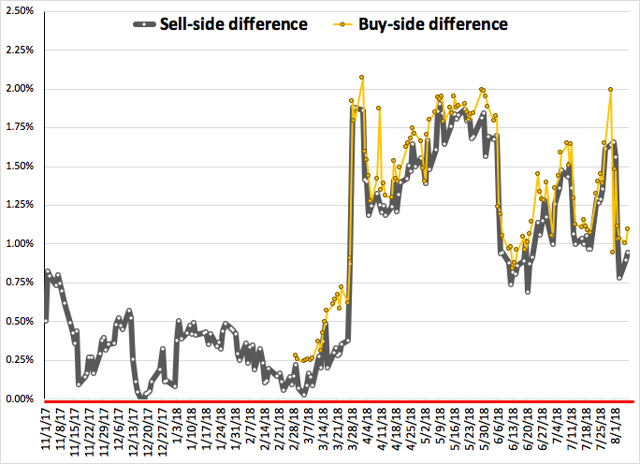 (Author's calculations. Data through Aug 7. For details on the article referenced above.) 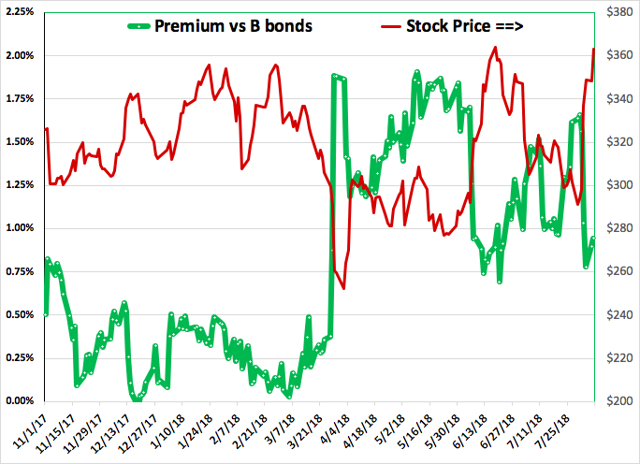 Bond traders don’t (yet) exhibit confidence that Tesla can raise the funds to take the company private. However, the stock price remains extremely volatile. Be careful, or (like me) stay far away from any investment in Tesla stocks or bonds.

Mike Smitka
216 Followers
I'm a retired academic economist. Over the decades I have focused on research on the auto industry and on the Japanese economy. But I was also a banker and worked in factories, and for the past 27 years have visited suppliers for business case and engineering presentations on innovations, as a judge for the Automotive News PACE awards. As such, I've visited about 50 suppliers, in Korea, Japan, the US, Canada and France. (I've visited another 50 or so via other activities.) I'm also on the steering committee of the GERPISA consortium of auto industry researchers, and was on the committee planning their annual global conference in Detroit, which was replaced by a virtual conference. I am active in the Industry Studies Association. I'm the co-author of Smitka and Warrian (2017), A Profile of the Global Auto Industry: Innovation and Dynamics, now available via Amazon as an inexpensive eBook.I first lived in Tokyo in 1975, after graduating from Harvard with a degree in East Asian Studies. My econ PhD is from Yale; the Nobel Laureate Oliver Williamson was my dissertation chair. I've spent 7 years in Japan, and have spent 2 months or more in China, Korea, Germany and the Philippines. I read, write and speak Japanese, and read German and Chinese.My current research interests are technology in the automotive supply chain, and the geography of the Chinese industry. My investing is passive, via my university's TIAA retirement plan.
Follow

Additional disclosure: My holdings are passive; I have not traded individual securities since 2010.