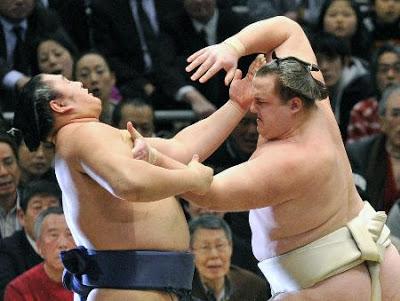 The withdrawal of the US from the Trans-Pacific Partnership trade agreement lift it exposed on two fronts. First, the TPP was going to modernize the NAFTA. Without, the US remains locked in protracted negotiations. A breakthrough in talks with Mexico has been reportedly imminent for weeks. Talks with Canada have apparently not progressed very far in recently, and the US insistence on a sunset clause remains a deal-breaker.

Second, is a trade agreement with the world's third-largest economy, Japan. About four months ago, Trump and Abe agreed to establish a new framework to discuss "free, fair, and reciprocal" trade. This new framework kicks off tomorrow with talks in Washington between US Trade Rep Lighthizer and Japan's Economy Minister Motegi. Expectations should be kept to a minimum. The US wants a win, of course, and Japan may simply hope to deter more aggressive protectionism from the US, and hopes to avoid a new tariff on autos.

Lighthizer has expressed his desire for a bilateral accord. The standard US demands include opening up Japan's agriculture sector to more US product, and the US has long wished Japan would buy more US autos. Abe had been initially reluctant to embrace the TPP, but since he did, he has not been fickle. The TPP has gone forward without US participation. Montegi may press Lighthiser to reconsider, but it's extremely doubtful that he will agree. At the same time, Lighthizer is most unlikely to get Japan to defect from the TPP-11 agreement by offering the US better terms. Indeed, some other countries want to join TPP, including South Korea, Thailand, Colombia, and ironically, the UK.

For nearly 40 years, US-Japanese trade tensions have been a recurring theme. Voluntary export restrictions and orderly market agreements, which were acceptable under GATT but not the WTO, were used by the Reagan Administration to address the trade imbalance. The US bilateral goods trade deficit with Japan stood at $46.2 bln in 1985 and $41.1 bln in 1990. In the last four years, the annual shortfall has hovered near $69 bln.

However, the deterioration of the bilateral balance ought not to obscure the fact that Japan has moved auto and auto part production to the US. Japanese brands produce around 3.8 mln vehicles in the US, some of which they export. Still, Japanese brands also import cars and parts into the US. A 20% tariff on Japanese auto and part exports to the US could boost costs by nearly JPY1 trillion (~$9 bln). Japanese carmakers also have integrated their production continentally in North America, and if the US puts 25% tariffs on product from Mexico and Canada, the added costs will double to almost $18 bln.

Japan seeks to avoid these tariffs. There are some things that Japan can offer. For example, under Abe, Japan has already dramatically increased its purchases of military equipment from the United States. It can take a page from the European playbook, which offered to do what it was already doing (buying more US soy, gradually boosting defense spending) or wanted to do (buy more LNG), which seemed sufficient to appease the US. The Trump Administration is hungry for a win that would demonstrate that its hardline negotiating strategy is working. In addition to buying more arms, Japan also has expressed the desire to invest in US infrastructure projects.

The US may boost the chances of success by focusing on space that may not be sufficiently covered by the TPP, like barriers to service trade, for which the US surplus is as chronic as Japan's surplus in goods trade and reimbursement for pharmaceutical products. However, given the public rhetoric, including from the free-trade wing of the Administration like Kudlow, there is borderline hubris that might not have been seen since the triumphalism days after the Berlin Wall fell and the Soviet Union collapsed. The Trump Administration seems emboldened.

Meanwhile, the Japanese yen is the only major currency to have appreciated against the dollar. The 1.5% gain this year contrasts with the 3.4% decline in the euro and 3.7% decline in the Canadian dollar. The Mexican peso is the strongest currency here in 2018, appreciated 6.3% against the US dollar. After falling at the start of the year, the dollar entered a JPY105-JPY108 trading range in Q1 and moved to a JPY108-JPY111 range in Q2. We had suspected the dollar was entering a JPY111-JPY114 trading range in Q3. However, the push above JPY113 in the middle of last month seems to have satisfied the demand, and the greenback has spent the last three of weeks in a narrow JPY110.60-JPY112.15 range.