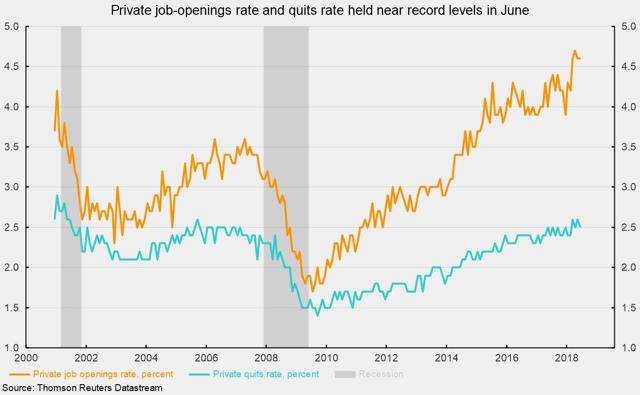 The latest Job Openings and Labor Turnover Survey from the Bureau of Labor Statistics shows the number of open positions in the private sector was essentially unchanged in June, holding at a very high level. Private job openings in the United States totaled 6.053 million in June versus 6.052 million in May. The industries with the largest number of openings were healthcare (1.161 million), professional and business services (1.133 million), leisure and hospitality (898,000), and retail (807,000).

The job-openings rate, openings divided by the sum of jobs and openings, was unchanged at 4.6 percent for the private sector. That is just 0.1 percentage points below the all-time high of 4.7 percent reached in April 2018 (see chart). The highest openings rates were in healthcare (5.5 percent), accommodation and food services (5.5 percent), and professional and business services (5.1 percent).

Further signs of labor-market strength may be seen in the layoffs rate, which ticked up to 1.3 percent for private employers. While slightly above the all-time low of 1.1 percent from March 2018, it is well below the 2.2 percent peak rate in 2009. The low layoffs rate is consistent with the multidecade-low level of initial claims for unemployment insurance. Combined, the high number of openings, the high openings rate, and the low layoffs rate all suggest the labor market remains very tight from an employer's perspective when trying to hire.

From a worker's perspective when deciding whether to quit, these data suggest strength as well. The quits rate among private sector employees ticked down to 2.5 percent in June from a cycle-high 2.6 percent last month. However, over the last four months, the quits rate among private sector employers has fluctuated between 2.5 percent and 2.6 percent, producing the highest four-month average since 2001 (see chart). The high quits rate corroborates the high level of confidence in the jobs market seen in The Conference Board Survey of Consumers.

Combining the data on people looking for work with those who want a job but haven't looked in the past month and the job-openings data, the number of available people per opening rose to 1.777 in June, just slightly above the record-low 1.558 from March 2018, and just a fraction of the 9.923 people per opening in 2009, just after the end of the Great Recession.

Overall, the data relating to the labor market continue to show strength. Payroll increases appear to be reaccelerating, layoffs remain low, and quits are near a cycle high. The substantial number of open positions in the economy and the low number of available workers per opening suggest wage gains may continue to experience upward pressure, but, as of now, increases have remained generally moderate. Still, attracting and retaining qualified labor is likely to remain a critical issue for business in the immediate future.

Follow American Institute of Economic Research and get email alerts
+
Add a comment
Disagree with this article? Submit your own.
To report a factual error in this article, click here.
Your feedback matters to us!