A few weeks ago, I wrote that I hated the term "active management." I reached that conclusion not because I have become a "buy-and-hold" convert, but because the term has been so corrupted by the financial-services industry.

Today, firms that are basically closet indexers use the term "active management." Other advisors that simply tweak their portfolios occasionally proclaim they are "active managers."

Even index funds have become active managers. They change the components of their indexes yearly. They appropriate active management methodologies and use terms such as "factor investing" to be called an index and avoid being viewed as active.

These so-called indexers want to have the benefits of active management while calling themselves indexers. It's a "chicken-and-egg" kind of argument. Except, in this case, those of us who have been in the industry long enough recognize the repackaging of the original active management methodologies that came first.

So instead of "active management," I proposed a different phrase to describe what it is that my firm, Flexible Plan Investment, does. Since 1981, we have been, and continue to be, practitioners of "dynamic risk management." "Dynamic" because of our ability to take action at any time, not just quarterly or at the end of the year. And "risk management" because the dynamic actions we take are done to manage the risk of the investment.

How does this differ from "active management"? Historically, active management has been divided into two camps. Those who pursued market-beating returns in the short run, and those who sought to reduce the risk of their investing by avoiding the big drawdowns that occur periodically in all of the financial asset classes in the long run.

The first camp has generally been discredited. The indexers and the Morningstar-like financial press love to point out that most active managers (as they define them) trail the indexes and few are persistent stars. However, the second camp has generally, at least in the academic community, been acknowledged as having been successful.

Take trend-following or momentum investing. In the last 20 years, academic studies have piled high supporting two propositions over various time periods of up to hundreds of years. First, they've shown that asset-class index returns that are trending upward tend to persist in moving in that direction. Second, the studies have established that all major drawdowns occur after a trend has reversed and turned negative.

The results have been conclusive. Momentum investing can beat buy-and-hold investing. Nobel Laureate Eugene Fama and researcher Kenneth French found in their study of factors (inconveniently, I believe) that the primary factor contributing to returns in the long run was momentum.

And the reason for this outperformance was not because trend following outperforms in an up market. It doesn't. Rather, it is because momentum investing misses the major part of the really big drawdown events that occur in the middle of the business cycle.

A similar argument of semantics in finance revolves around the words "strategic" and "tactical."

The plain meaning of each should allow for no misunderstanding. Yet the industry persists in confusing the two. We hear regular claims using the contradictory phrases of "active strategic allocation" and "restrained tactical investing."

According to the dictionary, "strategic" means "the identification of long-term or overall aims and interests and the means of achieving them," while "tactical" denotes "methods used to achieve a particular result." On one level, "strategic" suggests planning and "tactical" involves action.

I like to think of the difference between the two in baseball terms. Strategic is a plan to "cover all of the bases." Tactical is "being at the right place at the right time."

The manager can place his fielders in the spot where the ball is likely to be hit. Yes, he may wave them a little to the left or to the right or deeper or shallower, but essentially "being strategic" is positioning before the action takes place.

However, after the pitcher throws the ball, tactical takes over. By a prearranged plan, a ball hit on the ground causes the first baseman to move to cover first. The shortstop fields the ball, and, in a dance choreographed and practiced in advance, he throws it to the second baseman now covering second, who whirls in one motion to throw the batter out at first. All were in the right place at the right time.

So it is in investing. Strategic allocation is not active investing. It is the placement of dollars into different asset categories that are believed to "cover all of the bases" of future market developments.

Tactical investing can be as simple as a market-timing approach that stays in stocks as long as the trend is up and then moves into a defensive asset class such as bonds or money markets when the trend reverses. Or, it can be more complicated, following a rotational scheme where the investor seeks to always be invested in the asset classes that are advancing while avoiding those that are lagging.

Investment strategies are always strategic, but not all of them can say that they are tactical.

It was another constructive week in the stock market. Positive earnings reports (corporate earnings of S&P 500 stocks reporting are up 24% from last year) continue to propel stocks higher on all of the major indexes. Bonds also moved higher for the week, while gold continued to slump.

Tariffs have been mentioned as a worry by an increasing number of companies in their earnings reports and conference calls. It seems to cross financial sectors but has been most pronounced among the Industrials and Materials sectors. 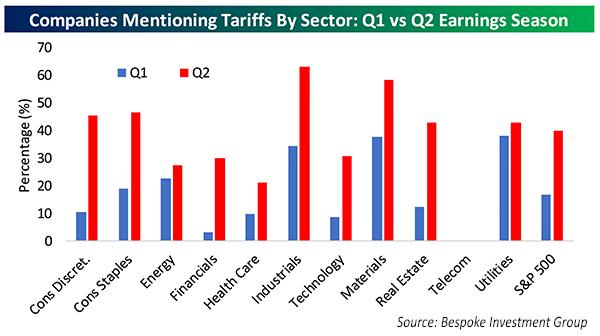 Still, we have seen little effect on stocks in general. This is surprising, as the seasonal period is turning from month-end bullishness to midmonth softness - or maybe I'm just getting a bit ahead of myself as it is still early in the month. 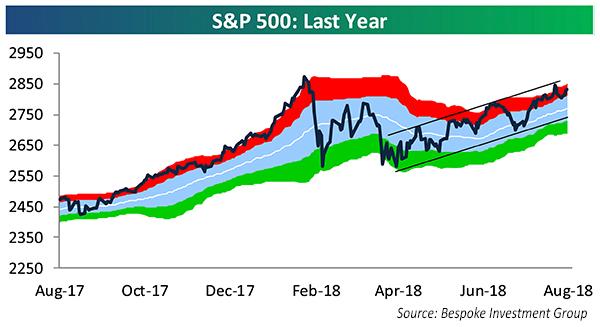 You can see that the S&P 500 remains in overbought mode and has not overtaken its January 24 high watermark. Yet, while the index has not done so, the number of issues advancing less those declining (the advance-decline line), which displays the internal breadth of the market advance, did hit a new high Friday.

Certainly, investors don't seem spooked by all of the tariff negativity. While the numbers of bulls have decreased and the bears have increased on the AAII Investor sentiment charts, the levels of both are in the middle of the pack. Neither is at the extreme levels that indicate a change in direction in the markets.

Among the economic reports, there was some initial concern when the July employment report came in under the level of employment expected. But then May and June updates registered and added 59,000 more jobs to the three-month total, and everything seemed right with the world again on Wall Street.

It is of some concern, however, that there continue to be reports that show the economy is cooling off. Just last week, both the ISM Manufacturing and Non-Manufacturing (Service) reports were released. They showed a decline in business activity on both fronts. But, again, we remain above the healthy 50% level despite the downturn. 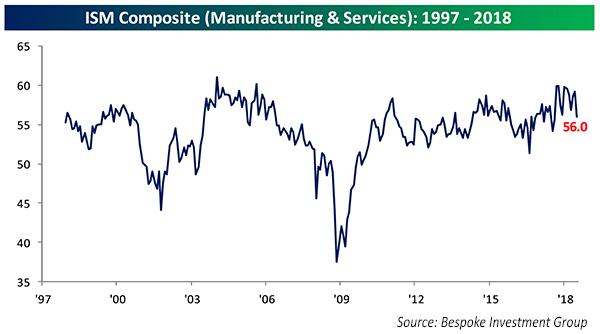 There are still rumblings of inflation. The ISM prices-paid component showed prices heading higher for the month and year over year. And the wages portion of the employment report showed them up 0.3%. Yet gold has not been the beneficiary. The yellow metal, despite being tremendously oversold, just can't find a bottom, as the U.S. dollar keeps rising and holding the precious metal down in price. 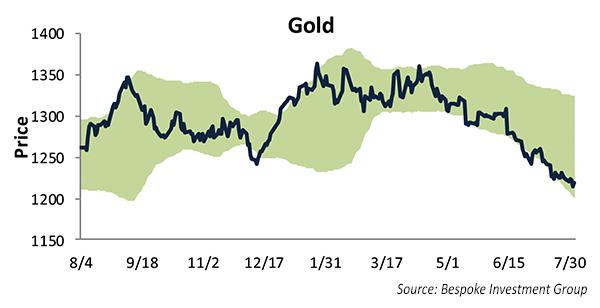 Earnings continue to pour in, and most have been better than expected (over 67%). Apple's (AAPL) earnings propelled the company to a $1 trillion valuation, just beating out Amazon (AMZN), Google (GOOG) (GOOGL), and Microsoft (MSFT) for the honor. The next-closest company to the trillion-dollar level after that quartet is Facebook (FB), at just half that value. Given its problems, Facebook seems unlikely to ever hit that mark.

Stock volatility has maintained a low level (as measured by the VIX) and has now fallen to its lowest level of the year. Low and falling volatility is very good for stocks (and also trend-following strategies).

The semantics of Wall Street may be confusing, and indicators (both of the market and of the economy) can certainly be perplexing. But one of the still-valid maxims of Wall Street is pretty simple: "The trend is your friend" - and the trend in stocks is solidly and unequivocally advancing, at least for now.

Invest With An Edge
656 Followers
Invest With An Edge (http://investwithanedge.com) is a free trading resource for everyday investors. Published by All Star Investor (http://www.allstarinvestor.com/), we’ve been delivering solid investing advice since 1991. We specialize in Exchange Traded Funds (ETFs), Mutual Funds, and Stock investing. This website includes: --Daily Market Commentary (http://investwithanedge.com/commentary) We cover the markets from a unique perspective. Our daily insight will help you to think about investing in a not-so-common way and will help you gain an edge in the markets. --Leadership Strategy Trading Method (http://investwithanedge.com/leadership-strategy) This growth strategy takes all investing styles (Large Cap Growth, Small Cap Value, etc.) and helps you to invest in the ones displaying true market leadership. --Weekly Investing Newsletter (http://investwithanedge.com/invest-with-an-edge-newsletter) We provide a powerful mid-week review of the markets with a focus on sectors, styles, and international positions. We also include a timely Pick of the Week for investors looking for more ideas.
Follow
2 Comments