It's been six months since I presented 4 hedged portfolios and 10 top names in week 37 of my Marketplace service (February 8th). Here's how everything did.

3 of the 4 hedged portfolios outperformed their expected returns, with the most aggressive one also outperforming SPY. 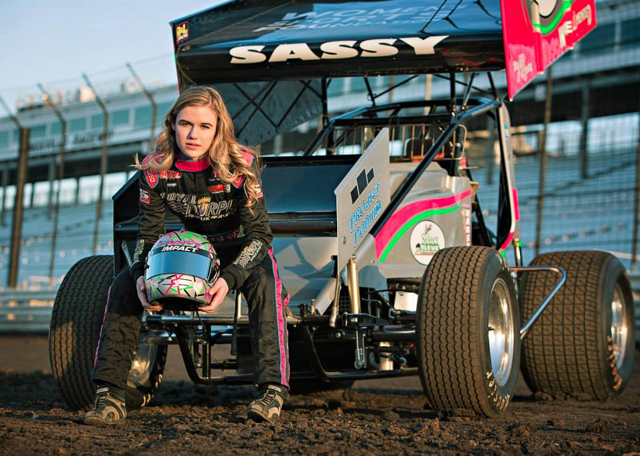 Each week since the beginning of June 2017, I have presented at least two hedged portfolios created by Portfolio Armor to my Bulletproof Investing subscribers. This is an "investing with a helmet on" approach, and these portfolios are designed to last six months at most. As with any investment method, the returns with this approach will vary, but, in the interests of transparency and accountability, I have promised to publicly share the final performance of everything I present, regardless of how it does.

Here, I update the final performance of the 4 hedged portfolios and the top 10 names (unhedged) that I presented in the 37th week I offered my service. Let's look at what I presented in Week 37 and how it did.

This was the $100,000 portfolio presented here initially. The data below was as of February 8th. The primary securities here were AbbVie (ABBV), On Assignment (ASGN), Continental Resources (CLR), and Cimpress N.V. (CMPR). They were selected because they had the highest potential return estimates, net of hedging costs when hedging against a >14% decline, and they had share prices low enough that you could buy a round lot of one of them for less than $25,000. Marvell Technology (MRVL) was added in a fine-tuning step to absorb leftover cash from rounding down to round lots of the first four names. 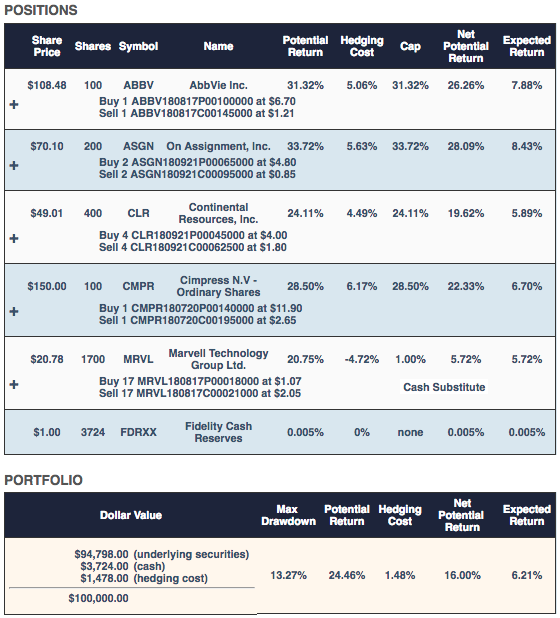 The worst-case scenario for this portfolio was a decline of 13.27% (the "Max Drawdown"), and the best-case scenario was a gain of 16% (the "Net Potential Return" or aggregate potential return net of hedging cost). The "Expected Return" of 6.21% was a ballpark estimate taking into account that actual returns, historically, have averaged 0.3x Portfolio Armor's potential return estimates.

Here's how the portfolio did, net of hedging and trading costs. 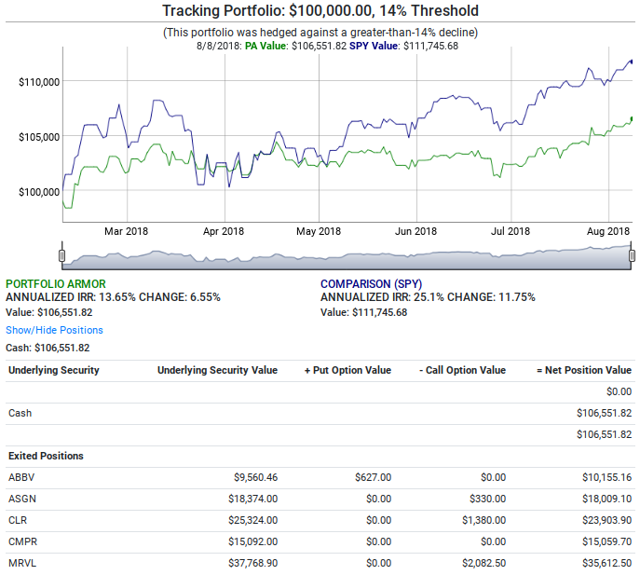 This portfolio was up 6.55%, outperforming its expected return but underperforming the return of the SPDR S&P 500 ETF (SPY).

So far, we have full 6-month performance data for 4 portfolios I've presented hedged against >14% declines. Here's how each of them did.

This was the $1,000,000 portfolio presented here initially. This portfolio had AbbVie (ABBV), On Assignment, AutoZone (AZO), Boeing (BA), Cimpress N.V. (CMPR), W.W. Grainger (GWW), and IPG Photonics (IPGP) as primary securities. Fortinet (FTNT) was added in a fine-tuning step, to absorb cash leftover from the process of rounding down to round lots of the primary securities. 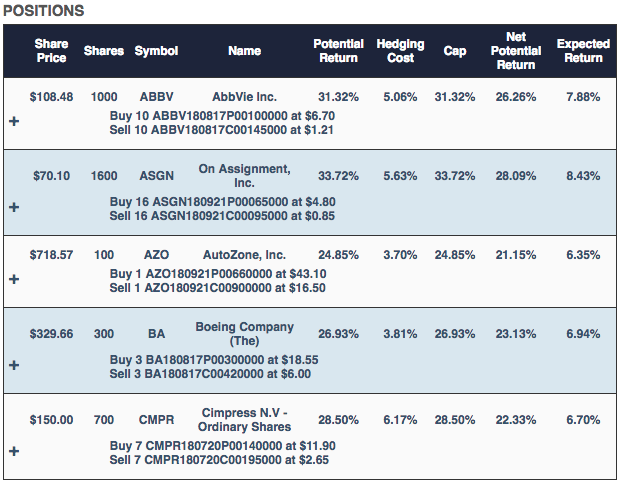 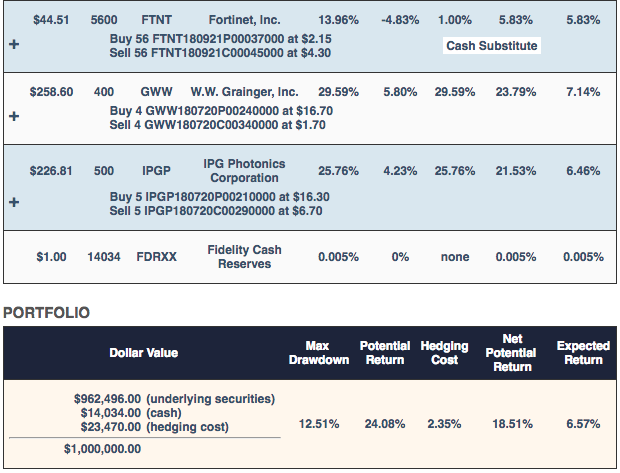 Here's the performance chart for Portfolio 2: 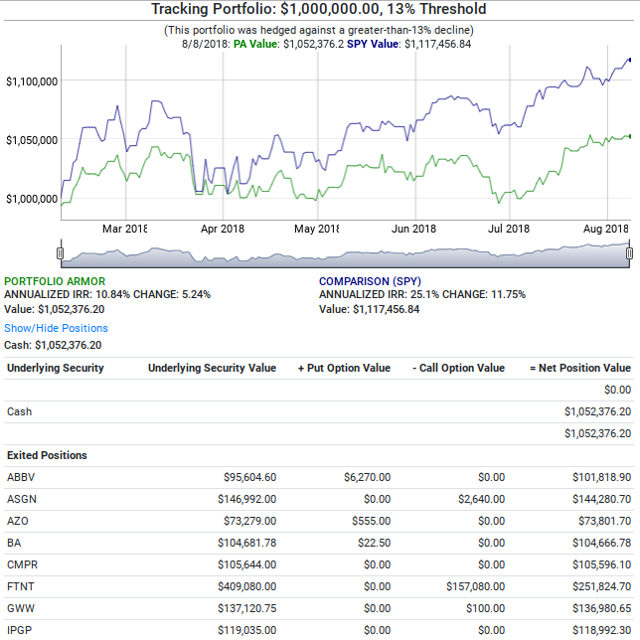 This one was up 5.24%, underperforming its expected return and SPY. This was the first portfolio I've presented hedged against a >13% decline.

This was the aggressive portfolio originally presented here at the time. This one had AbbVie, On Assignment, Boeing, Cimpress, N.V., W.W. Grainger, Netflix, and Square. Exact Sciences (EXAS) was added after to absorb the leftover cash from the rounding down process. 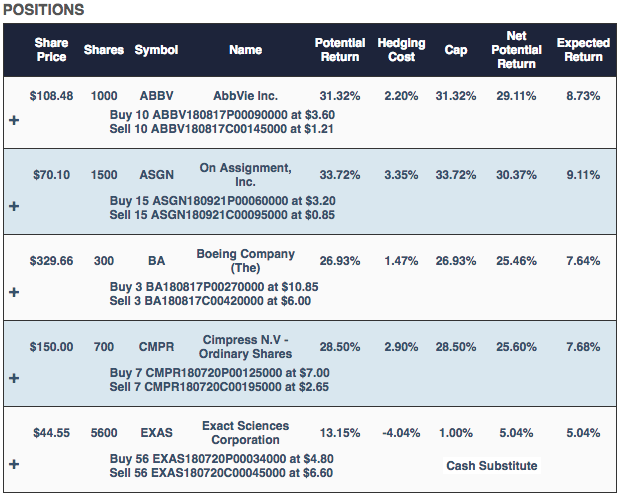 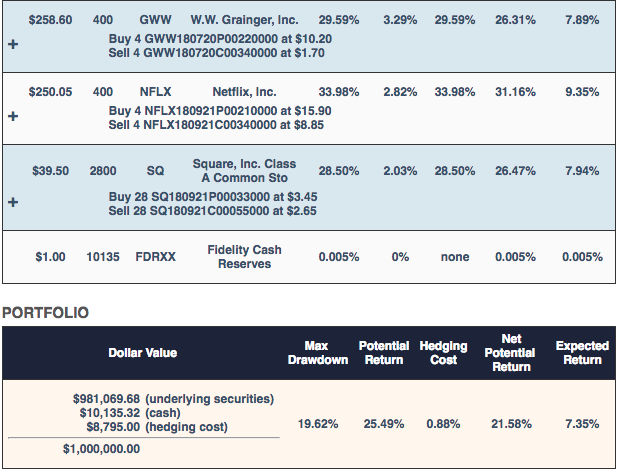 Here's how it did: 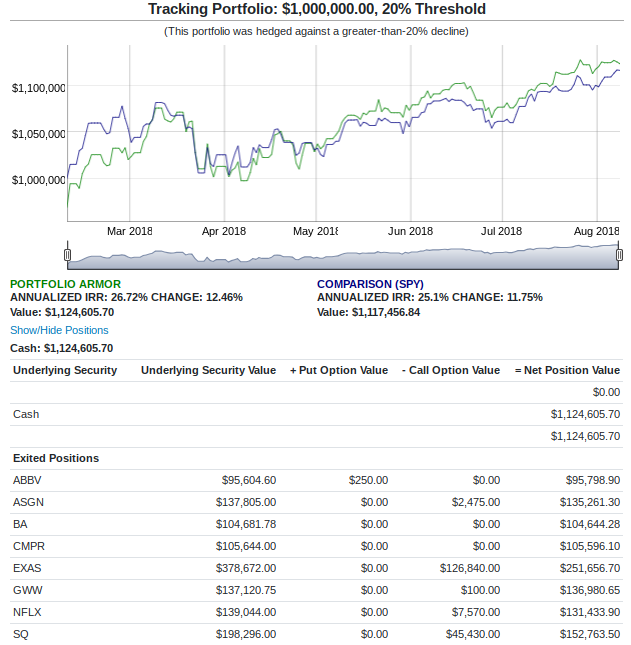 This one returned 12.46%, outperforming its expected return and SPY. So far, we have full 6-month performance for 20 portfolios I've presented hedged against >20% declines. Here's how each of them have done.

In this table you can see that there's variation in returns, but the average actual return is fairly close to the average expected return. That seems to be the case in general once we get 10+ portfolios in a sample.

This was the top names portfolio originally presented here, along with the list of top names. 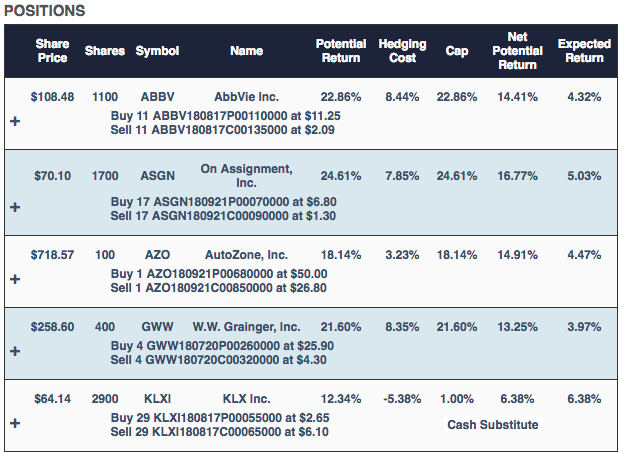 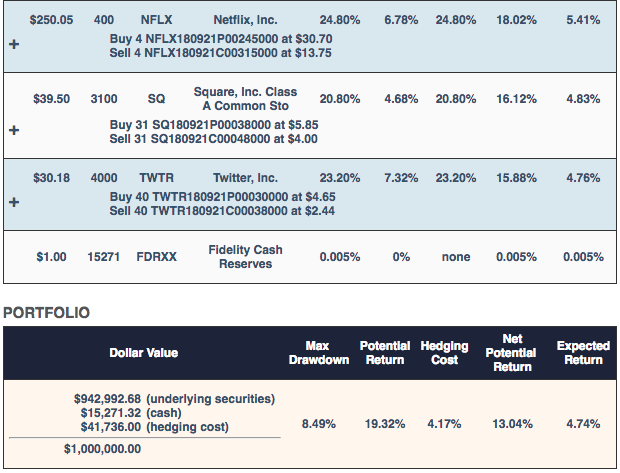 Here's how it did. 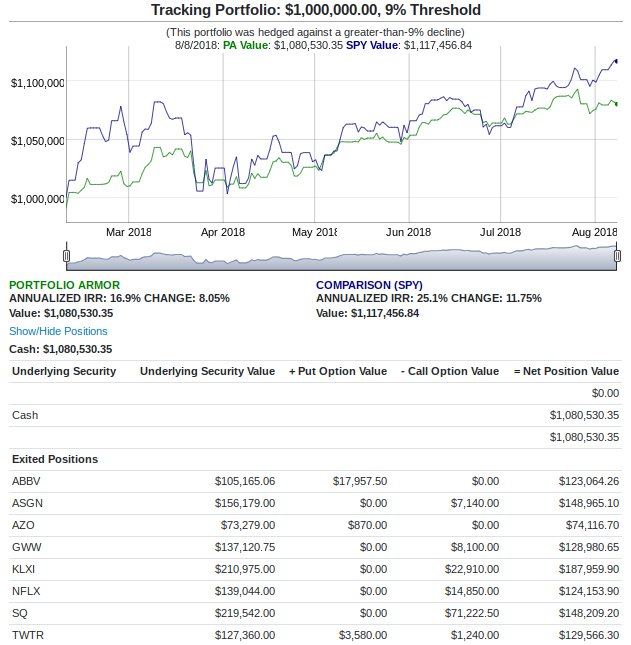 This one returned 8.05%, outperforming its expected return, but underperforming SPY. So far, we have full 6-month performance for 39 portfolios I've presented hedged against >9% declines. Here's how each of them did. 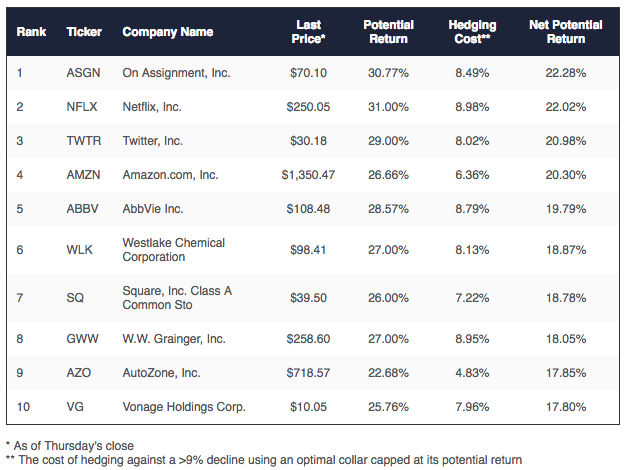 Here's how the top names did.

The top names returned 25.21% on average vs. 11.%75 for SPY. This was the 30th cohort out of 36 since June 8th that has outperformed SPY over the next 6 months. You can see the performance for all of the top names cohorts I've presented so far in the table below.

For a few months, in addition to posting those top names in my Seeking Alpha Marketplace service, I also time-stamped them on Twitter. If you click on the tweet shown below, and scroll down, it will take you to a thread showing those time-stamped posts as well as charts of their subsequent performance.

This week's performance was much better than last week's in absolute terms, with 3 out of 4 portfolios outperforming their expected returns. Only one outperformed SPY, but SPY did very well over this time period. Nevertheless, the top names (unhedged) more than doubled SPY's performance.

We still see the potential variability of hedged portfolio returns from week to week, but the proximity between the average expected returns and average actual returns in the tables above remains encouraging, because it suggests that with four entries per year (putting half of your money in a hedged portfolio now, half in three months, and repeating the process when those portfolios end), your actual returns will likely come close to your average expected returns.

To see this week's top names and hedged portfolios, you can sign up for a free two-week trial here.