In the past two days, the Euro (UUP, FXE) has garnered steam against the US dollar after it took support from the Fibonacci level at 1.1542. Furthermore, the euro managed to base out at the 1.155 mark which signaled to traders that there currently is positive momentum in the currency. Due to this, I believe the euro shall have an upswing to the range between 1.1680 to 1.1722. Thus, to ascertain the likelihood of this occurring, I shall look at the fundamental news affecting the pair, plus analyze the charts using technical analysis tools.

Fundamental news for the Pair: 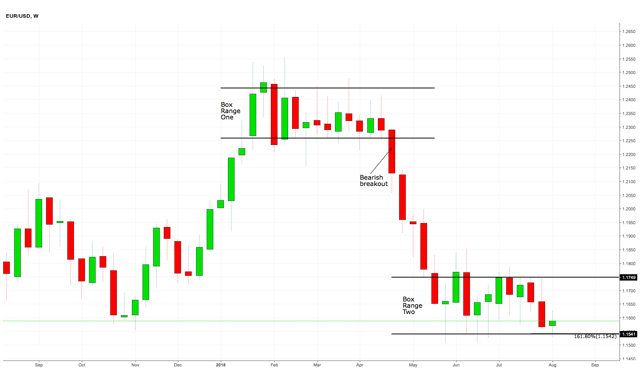 The pair’s weekly chart traded from January 2018 to April 2018 in a box range pattern that was agonizing for traders due to the lack of volatility. However, mid-April the Euro had a breakout from the bottom end which resulted in a tumble of 7.2% in the span of one month. 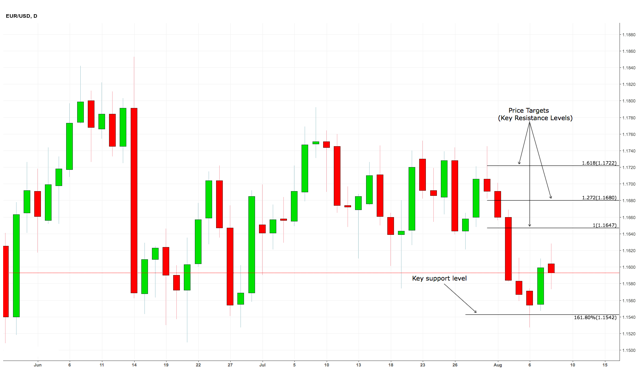 The pair’s daily chart has had a bullish reversal from a downswing pattern it has been trading in for the prior nine days. The bullish reversal occurred after the Euro formed a Bull Sash pattern which displays the bull’s ability to keep the market moving up into the session. Moreover, it shows that the bulls have gained control of the pair. Additionally, the pattern formed at the 161.8% support level at 1.1542.

On the indicator facet, the RSI on the daily chart indicates that the bias is presently tilted to the positive side. This reinforces the notion that the upswing is going to linger on.

Overall, I am leaning towards the bulls pushing the Euro to the range between 1.1680 and 1.1722. This is driven by the fact that the technicals fully support an ascent in the currency's value until that point. However, whichever way you decide to trade, do ensure that you utilize trailing stops, as this shall aid in capital preservation.

Sandeep Singh Ahluwalia
862 Followers
I am a finance and investment professional whose prime focus is on the British, Indian and American financial markets. I specialise in technical analysis with my key area being Candlestick pattern analysis and Fibonacci analysis.  Academically, I posses two masters degrees one is a Masters of Science in Finance degree from the University of Portsmouth, United Kingdom and the other is a Masters of Commerce degree specialising in Accounting. My Bachelors degree is in Economics, Finance and Banking from the University of Portsmouth, United Kingdom.
Follow