Alibaba (BABA) looks like a strong investment right here, but Altaba (NASDAQ:AABA) is even more compelling due to allowing investors to own shares of Alibaba at a discount. The results of Altaba's tender offer show that the strategy of buying itself out works well, the results from the tender offer have made Altaba even more attractive. 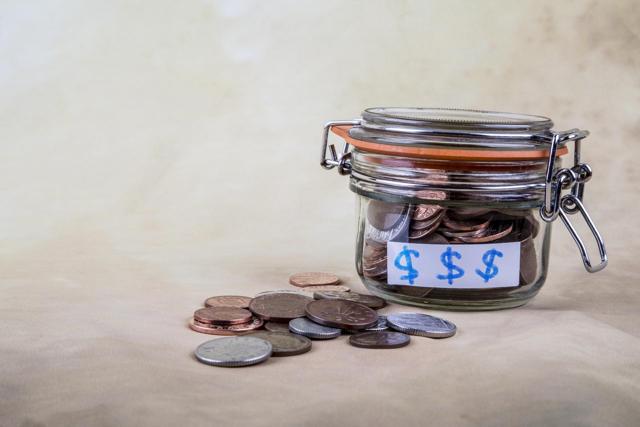 Alibaba, which is often touted as the Chinese version of Amazon (AMZN), is an attractive long term investment that allows investors to benefit from multiple megatrends:

- Online shopping: More and more consumers spend their money online instead of in brick-and-mortar stores, due to online shopping being more convenient and less time consuming.

- Economic growth in China and other Asian markets: Alibaba generates the majority of its revenues in China, the company is also active in other East Asian markets, in some cases via equity investments into local ecommerce companies. Economic growth (on a relative basis) is stronger in these countries compared to countries in Europe or North America. This allows for outsized disposable income growth in these countries, which, in turn, allows for strong consumer spending growth. There is less existing brick-and-mortar retail space in China compared to the US, which means that this consumer spending growth will be directed towards ecommerce primarily.

- Cloud Computing: Alibaba is not the biggest cloud player, but the company has established a cloud business that grosses more than $3 billion annually and that is growing at a 100%+ rate. With this immense growth and a lot of untapped market potential in Asia Alibaba will likely become a major cloud computing company over the coming years.

- Online payments: Alibaba holds a major stake in Ant Financial, which is the parent company of Alipay. At a valuation of $150 billion Ant Financial is the most valuable unicorn company in the world.

Alibaba will not only benefit from these megatrends that will likely remain in place for decades, the company also holds equity stakes in several other companies, including two food delivery companies that Alibaba seeks to combine.

Alibaba is also more profitable than Amazon despite trading at only half of Amazon's market capitalization. The higher profitability allows for more investments into its own businesses as well as into other companies through takeovers or equity stakes.

Alibaba thus looks, all in all, like a very attractive investment. Altaba, which is a holding company whose assets consist of BABA shares primarily, allows investors to buy shares of Alibaba indirectly. Due to the fact that Altaba trades at a discount to net asset value this means that investors can effectively buy shares of Alibaba at a discount.

On Altaba's website we find the following table that shows the company's holdings: 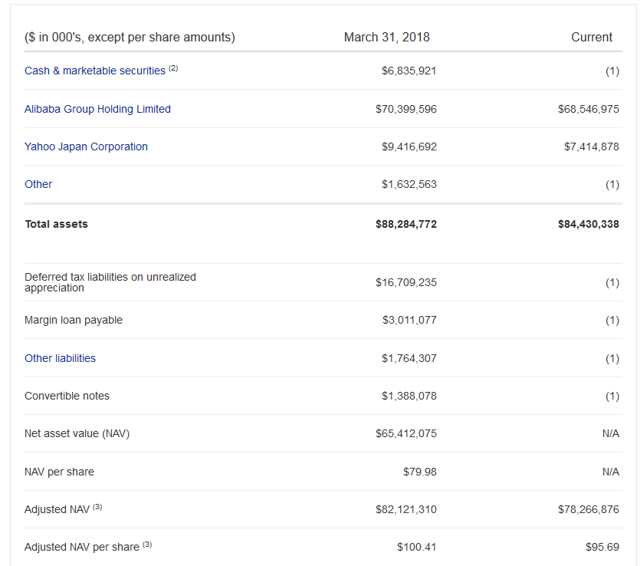 We see that adjusted net asset value was $78 billion, or $96 per share recently. Compared to Altaba's share price of $71 that means that Altaba's shares trade at a 26% discount to net asset value. Since almost all of Altaba's holdings consist of either cash or publicly traded securities it is remarkable that the discount is so sizable.

Altaba's management does not have to manage any operations or actual businesses as Altaba is a pure holding company. Management has the task to lower the discount to net asset value (which drives Altaba's share price, all else equal), or to otherwise increase shareholder value.

The company has engaged in tender offers for its own stock repeatedly, the results of the most recent tender offer were announced on August 9: Altaba has bought back 195 million of its own shares, holders who tendered their shares to Altaba will receive a total of 68 million shares of BABA as well as $1.7 billion in cash (0.35 shares of BABA and $8.93 in cash per share of AABA that was tendered).

Since other positions did not change, we only have to adjust the net value of the BABA holding and the cash position in order to get to the new adjusted net asset value of Altaba's holdings.

We see that the total company-wide NAV has declined by roughly $15 billion, but we have to account for the fact that Altaba's share count has declined substantially as well.

Since the tender offer was oversubscribed substantially (360 million shares were tendered even though the offer was only for 195 million shares) Altaba's management could easily do another such tender offer in the near future. Such a move would drive net asset value per share once again, which would be a big benefit for those that continue to hold shares of Altaba.

Alibaba is a company that is well positioned to grow for many years. The company holds a strong position in attractive markets and is highly profitable. Investors can buy shares of Alibaba indirectly by investing into Altaba, which trades at a substantial discount to NAV.

After calculating what the impact of the recent tender offer looks like it becomes clear that Altaba's NAV per share has risen substantially, the discount to NAV has widened to 33%.

Alibaba is a relatively attractive investment already, but Altaba, which allows investors to purchase shares at a massive discount, looks even better. Management has the option to do more tender offers to drive NAV per share, and thereby shareholder value, further.

Source for details about the tender and the transaction: This SEC filing.

Jonathan Weber
45.55K Followers
Author of Cash Flow Club
The Investment Community where "Cash Flow is King"
According to Tipranks, Jonathan is among the top 1% of bloggers (as of July 24, 2022: https://www.tipranks.com/bloggers/jonathan-weber).

Disclosure: I am/we are long AABA. I wrote this article myself, and it expresses my own opinions. I am not receiving compensation for it (other than from Seeking Alpha). I have no business relationship with any company whose stock is mentioned in this article.