Boeing (NYSE:BA) announced that it has suffered delays caused by a lack of engines and fuselages on the 737. Aircraft without engines are parked outside the Renton, Washington plant. Engine shortages occurred in the second quarter and this increased in the third. Airbus (OTCPK:EADSF) had nearly 100 planes without engines, a number that it is working down. Both companies are sold out through 2024. Higher production is justified by the market demand, but it is dependent on engine availability. Unless more engines become available, stock prices will fall.

Both manufacturers have recovery plans. When the planes are delivered, the cash flow will be back on plan. Both have yearly increases in production and they have talked about raising production over the next few years. Airbus talked about going to 70 to 75 aircraft per month over the next two to three years. Airbus is more dependent on the narrow bodies so this problem is worse for them.

Boeing and Airbus have a lot at stake. Boeing increased production in June to 52 per month and the 2019 increase to 57 is still on, but it may not be achievable. This is an increase of 60 aircraft per year with average revenue of $50 million. It totals $3 billion per year. Renton has been upgraded and automated. It is the most efficient narrow body plant in the world. Therefore, the cost to produce an extra 60 units is largely the purchased parts. That is not trivial because it includes the fuselage. However, the incremental profit could be $1 billion. Airbus costs are higher but the increase is highly profitable. Analysts’ valuations include the expectations of future increases, which will be delayed.

The Leap engine for the 737 and 320 is shipping behind schedule. In the past, Boeing met the schedule by shipping more of the older models with older engines. In addition to engines, the 737 fuselage is made in Kansas by Spirit Aero Systems and shipped by rail through the mountains to Renton Washington for final assembly. Production is difficult to maintain let alone increase. Boeing will work with Spirit and Spirit suppliers to overcome these constraints. They will meet the present 52 per month plan. However, they need further increases in 2019 and beyond.

The problem for both is the engine. Airbus uses both the CFM Leap, a 50/50 joint venture between GE (GE) and Safran (SAFRF:US) OTC, (SAF.PA), and the Pratt and Whitney (UTX) geared turbo fan (GTF). Both of these engines are behind their delivery schedule. While both have committed to recovery and to meet this year’s schedule, that is not a sure thing. Neither production line is mature. A relatively minor supplier problem can cause planes that are parked without engines.

The graph below illustrates the transition from the current product, the CFM-56 to the Leap. 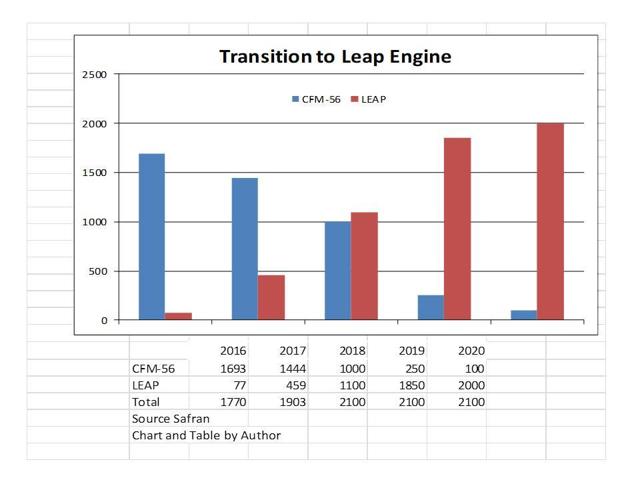 The 320 and 737 currently use the Leap. The GTF is available in five models in three diameters. Currently the Airbus 220(Formerly Bombardier C type) and the Embraer 195E2 (sold by a joint venture controlled by Boeing) are the other two planes in production that use the GTF. The chart illustrates that the Leap product is planned to increase from 1100 to 1850. Will that increase solve the problem of lack of engines? No. The models using the Leap will replace the production of 737 and 320 earlier models using the CFM 56. The Pratt and Whitney GTF is used on about 40% of the 320s. If they increased production, more Leap engines would be available for the 737. However, Pratt and Whitney cannot meet the production schedule and face growing demand for 220 and 195E2. These two planes have smaller engines that sell at higher prices. Therefore, they will get first priority.

The bizarre thing is that the Aircraft manufacturers’ margins are high but the engine makers are losing money on new engine manufacturing. Leap will overtake the CFM 56 this year. However, the Leap is produced at a loss. They are coming down the experience curve, so the losses are decreasing. Competition with the Pratt & Whitney (UTX) GTF is intense. The engines are sold with 70% discounts. Therefore, a Leap engine with a list price of $13 million will actually sell for $3.7 million.

The commercial engine business model is to make the engine at a small profit or no profit and then make large profits from the aftermarket service. The cost of the effort to prevent Pratt and Whitney geared turbo fan from gaining share in the single aisle market was extremely high. The Leap, with a volume of 1100 units, is expected to lose money in 2018. The CFM-56 was a source of income. It sells at a higher price than the Leap under old contracts. Therefore, a higher performing product that loses money replaced the old profitable engine. Worse still, the Pratt and Whitney will not fit under the 737 wing. However, Boeing had to be given a price cut even though the GTF could not be used. CFM will not see significant grow until 2020. After that, it will grow nicely. On top of the huge discount are the costs of the rapid expansion of production. Before suppliers have a chance to stabilize the production, they have resisted plans to increase production. CFM is frustrated by these costs and is reluctant to increase production more rapidly.

One third of the buyers of the Airbus 320 have yet to make an engine selection so the discounts will continue. Leap Engine manufacturing is about $9.5 billion with parts and service totaling $12 billion in 2018.

The airframe makers will need to make it worthwhile for the engine makers to produce more. They may do that but production capacity does not come quickly. It takes time to find vendors, and make the engines more producible etc. So the bright promises of higher production will be deferred. Boeing profits in the next five years will be lower but the bigger loser will be Airbus because they depend on the narrow bodies more than Boeing.

Edward Ambrose
1.94K Followers
I am not the typical analyst. I have unique skills, honed by years of successful Mergers and Acquisition accomplishments, to find beaten down stocks that have the potential for recovery and growth. These companies are helpful in balancing a portfolio as well as beating the market. This experience left with strong appreciation for fundamental analysis of a company’s businesses rather than the whole corporation, to find what will drive the results. ed.ambrose9@gmail.com 609 685 2290