In 2011, I began writing for Seeking Alpha, and quickly encountered a major challenge. I realized that writing about technical analysis on a fundamental analysis website was not going to be easy.

While those that initially read my articles were quite skeptical (and that is probably being kind), as Seeking Alpha readers began to see the accuracy in my analysis, I started to gain a following. It was not long until I was the number one followed metals analyst on Seeking Alpha, and have basically remained in that position for the great majority of the seven years I have been writing on Seeking Alpha.

Lately, one of the commenters to an article I wrote suggested that we peel back the curtain regarding my analysis methodology:

“You have a large following on SA and in my view are the definitive TA expert on SA, so please consider the following: Offering a weekly SA post on TA Basics (101 if you will) in an effort to introduce more to at least gaining an understanding of TA and how they might benefit from it.”

So, after getting buy-in from the editors at Seeking Alpha, I have begun this new series of articles which will give you a bit more insight into the technical analysis methodologies I use.

So, if you are interested in a methodology which will open your minds and eyes as to how markets really work, then let’s move right into the overview.

Elliott understood that financial markets provide us with a representation of the overall mood or psychology of the masses. And, he also understood that markets are fractal in nature. That means they are variably self-similar at different degrees of trend.

Most specifically, Elliott theorized that public sentiment and mass psychology move in 5 waves within a primary trend, and 3 waves within a counter-trend. Once a 5 wave move in public sentiment has completed, then it is time for the subconscious sentiment of the public to shift in the opposite direction, which is simply the natural cycle within the human psyche, and not the operative effect of some form of “news.” 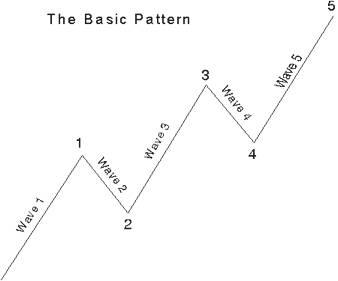 This mass form of progression and regression seems to be hardwired deep within the psyche of all living creatures, and that is what we have come to know today as the “herding principle,” which gives this theory its ultimate power.

And, over the last 30 years, many social experiments have been conducted throughout the world which have provided scientific support to Elliott’s theories presented almost a century ago.

In a paper entitled “Large Financial Crashes,” published in 1997 in Physica A., a publication of the European Physical Society, the authors, within their conclusions, present a nice summation for the overall herding phenomena within financial markets:

“Stock markets are fascinating structures with analogies to what is arguably the most complex dynamical system found in natural sciences, i.e., the human mind. Instead of the usual interpretation of the Efficient Market Hypothesis in which traders extract and incorporate consciously (by their action) all information contained in market prices, we propose that the market as a whole can exhibit an “emergent” behavior not shared by any of its constituents. In other words, we have in mind the process of the emergence of intelligent behavior at a macroscopic scale that individuals at the microscopic scales have no idea of. This process has been discussed in biology for instance in the animal populations such as ant colonies or in connection with the emergence of consciousness.”

“The causes of these cyclical changes seem clearly to have their origin in the immutable natural law that governs all things, including the various moods of human behavior. Causes, therefore, tend to become relatively unimportant in the long term progress of the cycle. This fundamental law cannot be subverted or set aside by statutes or restrictions. Current news and political developments are of only incidental importance, soon forgotten; their presumed influence on market trends is not as weighty as is commonly believed.”

Next week, I will focus on the last sentence in Elliott’s quote above using real market examples, along with studies performed over the last 20 years. And, once I have presented the theoretical basis for Elliott Wave analysis, I will then present articles breaking down how we perform the analysis.

The Market Pinball Wizard attempts to identify turning points and targets in the market with high levels of probability. Our goal is to teach you to fish so you can become a better trader and investor, and ultimately, learn to master the markets on your own.

A subscription includes video tutorials and articles about risk management, Elliott Wave analysis, and Fibonacci Pinball, as well as regular updates on the S&P 500, metals and GDX, USO, and the DXY.

As the metals market develops its bottoming, and the equities market sets up for its run to 3000+, come join us at The Market Pinball Wizard for a free trial while we track these markets to their long-term targets.

"Avi Gilbert really knows Elliott Wave Analysis and has the insight and ability to keep me fully apprised of the various possible interpretations of the wave forms. He produces such a superior endeavor that I recently let my subscription to EW International lapse. This service far surpasses any others I've come across."

“Unfortunately I don't have the time to attempt to become a master at labeling charts using the methods of EW. However, I feel like Avi has done an excellent job helping me to understand the general theory behind why it works. It has truly changed my outlook not only on markets, but on the reality of what drives many of the things that happen in the world. It's also helped me have an entirely different approach to my career . . .”

Avi Gilburt
69.22K Followers
Author of The Market Pinball Wizard
The #1 Service For Market and Metals Direction!
Avi Gilburt is founder of ElliottWaveTrader.net, a live trading room and member forum focusing on Elliott Wave market analysis with over 6000 members and almost 1000 money manager clients. Avi emphasizes a comprehensive reading of charts and wave counts that is free of personal bias or predisposition.