"Barring a breathtaking plunge, the bull market in U.S. stocks on Aug. 22 will become the longest in history, and optimistic investors argue it has miles to go before it rests." - Sue Chang, MarketWatch

Depending on how you measure beginnings and endings, or what constitutes a bear market or the beginning of a bull market, makes the statement a bit subjective. However, there is little argument the current bull market has had an exceptionally long life-span.

But rather than a "siren's song" luring investors into the market, maybe it should serve as a warning.

"Record levels" of anything are "records for a reason."

It should be remembered that when records are broken that was the point where previous limits were reached. Also, just as in horse racing, sprinting or car races, the difference between an old record and a new one are often measured in fractions of a second.

Therefore, when a "record level" is reached, it is NOT THE BEGINNING, but rather an indication of the PEAK of a cycle. Records, while they are often broken, are often only breached by a small amount, rather than a great stretch. While the media has focused on record low unemployment, record stock market levels, and record confidence as signs of an ongoing economic recovery, history suggests caution. For investors, everything is always at its best at the end of a cycle rather than the beginning.

The chart below has been floating around the "web" in several forms as "evidence" that investors should just stay invested at all times and not worry about the downturns. When taken at "face value," it certainly appears to be the case. (The chart is based up Shiller's monthly data and is inflation-adjusted total returns.) 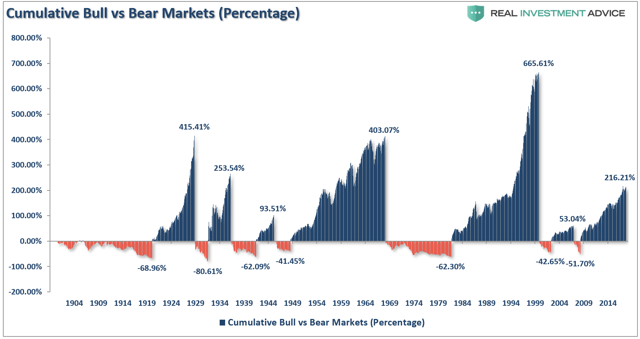 The problem is the entire chart is incredibly deceptive.

More importantly, for those saving and investing for their retirement, it's dangerous.

The first problem is the most obvious, and a topic I have addressed many times in past missives, you must worry about corrections.

"Most investors don't start seriously saving for retirement until they are in their mid-40s. This is because by the time they graduate college, land a job, get married, have kids and send them off to college, a real push toward saving for retirement is tough to do as incomes, while growing, haven't reached their peak. This leaves most individuals with just 20 to 25 productive work years before retirement age to achieve investment goals.

This is where the problem is. There are periods in history, where returns over a 20-year period have been close to zero or even negative."

Currently, we are in one of those periods.

Back to the first chart above, while the mainstream media and bloggers love to talk about gains and losses in terms of percentages, it is not an apples to apples comparison.

Let's look at the math.

Here is the problem with percentages.

Then the problem now becomes the issue of having to regain those 4,000 lost points just to break even.

Let's look at the S&P 500 inflation-adjusted total return index in a different manner.

The first chart shows all of the measurement lines for all the previous bull and bear markets with the number of years required to get back to even. 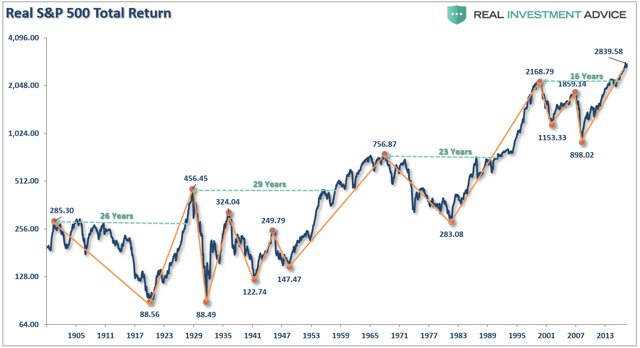 What you should notice is that while the original chart above certainly makes it appear as if "bear markets" are no "big deal," the reality is that in many cases, bear markets wiped out essentially a substantial portion, if not all, of the the previous bull market advance. This is shown more clearly when we convert the percentage chart above into a point chart as shown below. 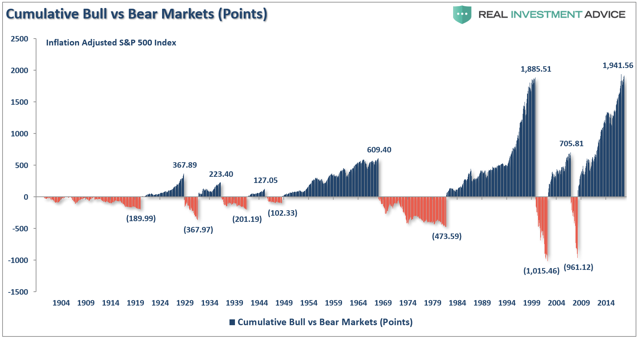 Here is another way to view the same data. The table and chart below overlays the point AND percentage of gain and loss for each bull and bear market period going back to 1900 (inflation-adjusted).

Again, the important thing to note is that while record "bull markets" are a great thing in the short term, they are just one half of the full-market cycle. With regularity, the following decline has mostly erased the previous gain.

While the financial media is anticipating a new "record" being set for this "bull market," here is something to think about.

While everything is certainly firing on all cylinders in the market and economy currently, for investors this should be taken as a warning sign rather than an invitation to pile on additional risk.

In the near term, over the next several months, or even a year, markets could very likely continue their bullish trend as long as nothing upsets the balance of investor confidence and market liquidity.

"'The more it changes, the more it's the same thing.' I have always thought this motto applied to the stock market better than anywhere else. Now the really important part of the proverb is the phrase, 'the more it changes.'

The economic world has changed radically and will change even more. Most people think now that the essential nature of the stock market has been undergoing a corresponding change. But if my cliché is sound, then the stock market will continue to be essentially what it always was in the past, a place where a big bull market is inevitably followed by a big bear market.

In other words, a place where today's free lunches are paid for doubly tomorrow. In the light of recent experience, I think the present level of the stock market is an extremely dangerous one."

He is right, of course, things are little different now than they were then.

For every "bull market" there MUST be a "bear market."

While "passive indexing" sounds like a winning approach to "pace" the markets during the late stages of an advance, it is worth remembering "passive" approaches will also "pace" the decline.

Understanding that your investment returns are driven by actual dollar losses, and not percentages, is important in the comprehension of what a devastating effect corrections have on your financial outcome. So, before sticking your head in the sand and ignoring market risk based on an article touting "long-term investing always wins," ask yourself who really benefits?

This time will not be "different."

If the last two bear markets haven't taught you this by now, I am not sure what will.

Maybe the third time will be the "charm."