As many long-term followers know, I have been bullish on long-term bonds for quite some time, arguing that interest rates would not move materially higher. Over the past couple of years, each move higher in rates was met with deafening calls for the end of the bond bull market and the start of a new paradigm where rates would move higher. Fast forward to today and the 30-year Treasury rate is nearly below 3% once again and the 10-year rate sits near 2.8%.

There was never an economically sound argument as to why long-term interest rates would "break out" to 3.5% or 4.5% as many analysts were calling for.

Some bond bears may claim victory on the move higher in yields from the historic low made in the middle of 2016, but the reality is that long-term interest rates have been flat for years. 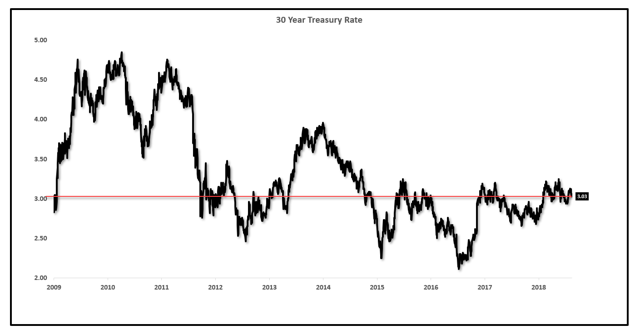 Interest rates will ultimately move lower as economic growth in the United States continues to slow through Q3 and Q4 as we have been seeing in the data over the past couple of weeks.

A narrative that has been gaining steam as of late and is worth taking a look at is the record short position that has been building across the Treasury curve.

While this is not the main reason behind my positioning, major bond investors such as Jeffrey Gundlach have cited this information as a reason to perhaps flip to the bullish side of Treasury bonds and bet on falling rates. 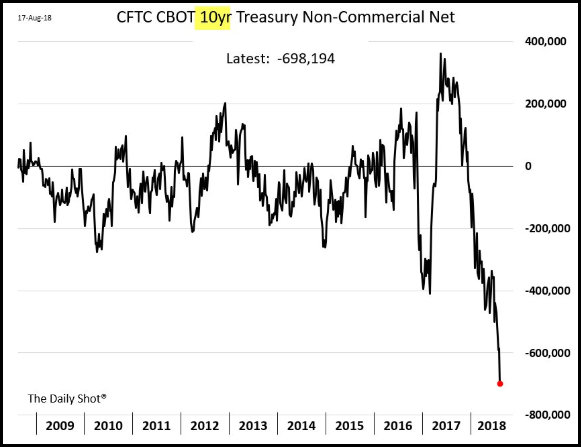 This position is not isolated to the short end or the long end of the Treasury curve. The record short position can be seen in most areas of the curve, including Ultra-Long duration bonds or 30-year bonds. 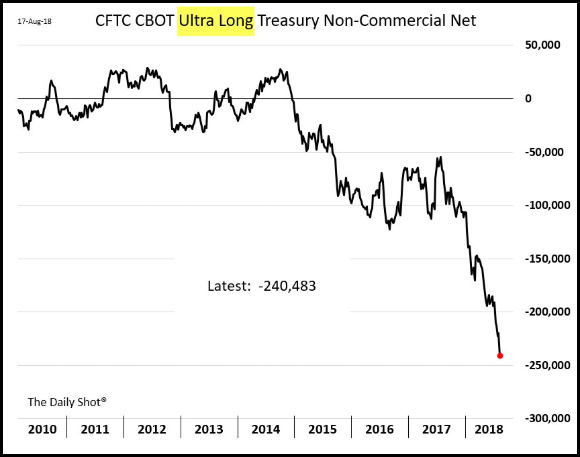 When looking at how to play this trade, there are several popular bond ETFs that can give you a very low-cost exposure at various points on the Treasury curve.

Many investors are familiar with the iShares 20+ Year Bond ETF (NASDAQ:TLT); however, many believe this is equivalent to a long bond exposure. When looking at the breakdown below, while the average maturity is in the 20-year to 30-year range, due to a cash position and some other factors, the effective duration of the ETF is around 17.5.

The Vanguard Extended Duration ETF (NYSEARCA:EDV) gives you exposure much farther out on the Treasury curve with an effective duration of 24.5 years. While EDV is less liquid than TLT, trading an average of 490,000 shares per day compared to over 6 million for TLT, if you want a more pure play on the ultra-long bond, EDV is a better security.

Below is a graph of the entire Treasury curve today (in black) and one year ago (in red). Along the curve, I have marked roughly where the effective duration of EDV, TLT and NASDAQ:IEF sit for a representation of where the exposure of the ETF will most closely correspond on the Treasury curve.

The question remains as to whether you should buy bonds now and wait for the economic data to roll over and the subsequent short-squeeze to ensue or to wait for confirmation that rates are, in fact, not moving higher.

I have had a core position in long-term bonds with the thesis that rates would not move higher without a material rise in economic growth. Year over year economic growth reached 2.85% in Q2, but average growth remains near trend and little evidence supports sustained year-over-year growth above the current rate. Rates, as a result, are likely capped on the upside. The record short position in Treasury bonds simply adds more fuel to this trade.

Buy bonds now and wait as opposed to waiting to buy bonds.

Note From The Author: It can be hard to find economic data presented without any bias in a consistent and repeatable way.

Even more frustrating is the lack of transparency surrounding most media pundits and forecasters alike. You never know what their recent track record is or what the principles behind their decisions are. Often times investors agree with media talking heads simply due to their status and recognizability.

EPB Macro Research addresses these problems by providing an asset allocation model, with exact percentages, that is backed by macroeconomic analysis to improve your investment returns and reduce drawdowns and portfolio volatility.

EPB Macro Research tracks over 40 economic data points in an algorithmic fashion to create an asset allocation based on which asset class stocks, bonds or commodities, is likely to outperform over the next 12 months.

I only publish my exact asset allocation and track record to members of EPB Macro Research.

If you want to take a look at the exact portfolio I am using and how it has performed over time, click the link below.

BECOME A MEMBER OF EPB MACRO RESEARCH: CLICK HERE TO LEARN MORE (It's Free To Join)

Disclosure: I am/we are long TLT, EDV. I wrote this article myself, and it expresses my own opinions. I am not receiving compensation for it (other than from Seeking Alpha). I have no business relationship with any company whose stock is mentioned in this article.