With Citron tweeting about the intellectual property of CV Sciences, Inc. (OTCQB:CVSI), CVSI has seen its shares going down from $9 to $3.40 in just one day. After studying the business of CV Sciences, the value erosion seems too large as the company's core business is not R&D, but the commercialization of Cannabidiol. The market needs to calm down and study the company's revenue sources closely.

Research And Development Is Not The Company's Core Business

The company is separated into two business segments; consumer products and specialty pharmaceutical. The largest segment is the consumer products business segment, which is in charge of manufacturing and selling the company's CBD brand PlusCBD™. CV Sciences distributes more than 50 stock-keeping units and also sells raw materials to consumers for resale into the market. The company seems to be interesting due to its relationships with European suppliers of raw materials. The fact that the company serves as a distributor for other vendors seems very beneficial. It shows that CV Sciences has built connections in the industry, which should be appreciated.

The specialty pharmaceutical business segment is focused on developing synthetic cannabinoids to treat wide range of medical conditions. This segment does not seem to be that important for CV Sciences. The company does not seem to have a lot of patents as of today. It is clearly mentioned in the annual report. The CVSI-007 is the company's first patent-pending product candidate. The image below provides further information on this matter:

The only patent received is "Novel Process for Generating Hemp Oil with a High CBD Content" from the U.S. Patent and Trademark Office:

The company's intellectual property is clearly explained in the annual report with the following words:

Financials - How Important is Each Business Segment For CV Sciences?

As of December 31, 2017, the balance sheet reported only $3.8 million in intangibles, only 25% of the total amount of assets. In addition, in note 6 of the prospectus, it is noted that in-process research and development only equals $3.7 million. With these figures in mind, research and development does seem the main activity of CV Sciences. The image below provides further information on this matter:

The company also specified in the annual report that the amount of expenses in research and development are very small. Read the following lines for further details:

In July-August 2018, the stock price increased from $1.6 to $9. Revenue growth seems the most evident reason for stock run. However, other analysts thought that patent creation was the most significant on this name. The image below provides information on the communication made by short seller Citron Research through Twitter: 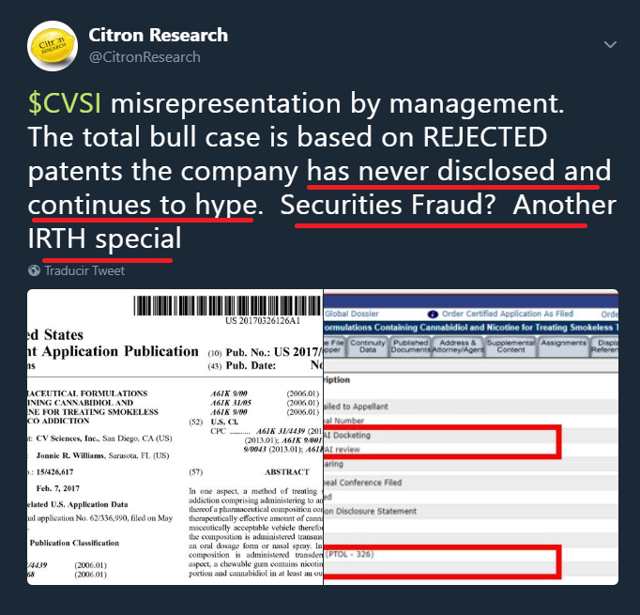 Citron claims to have found documents related to several rejected patents. It does not seem very clear whether the company must disclose rejected patents. However, that's not the most interesting here. Citron notes that the company's bull case is based on the intellectual property of CV Sciences, the patents, which does not seem at all true. CV Sciences did not really discover anything new in July-August 2018. With a 203% revenue increase in Q2 2017, the financials is what matters the most on this name. Check the extraordinary figures released in August:

Could the stock run be created by the research and development executed by the specialty pharmaceutical business segment? The following is information released about its recent activities in this space. The company does not seem to report any significant improvement to justify multiplying the share price by 3.75x.

The most interesting on this name is that the market reacted strongly to the new information released by Citron. The company lost more than one third of its market capitalization in only one day. The collapse seems massive. Have a look at it in the chart below:

Is the reaction really justified? It does not make much sense. CV Sciences should not lose such market capitalization for issues in a business segment that does not represent more than 25% of the total amount of assets.

CV Sciences is trading at 43.77x EBITDA, 5.42x sales with a gross profit margin is equal to 70.70%. The company's figures look really high. However, many other companies operating in the same sector are trading at similar or higher valuations. The following are the competitors noted in the company's annual report.

Zynerba Pharmaceuticals (ZYNE), which is a specialty pharmaceutical company and does not commercialize anything, trades only at 2.07x its book value. This company is an interesting comparable peer. Like CV Sciences, ZYNE's product candidate is still in the phase of development: 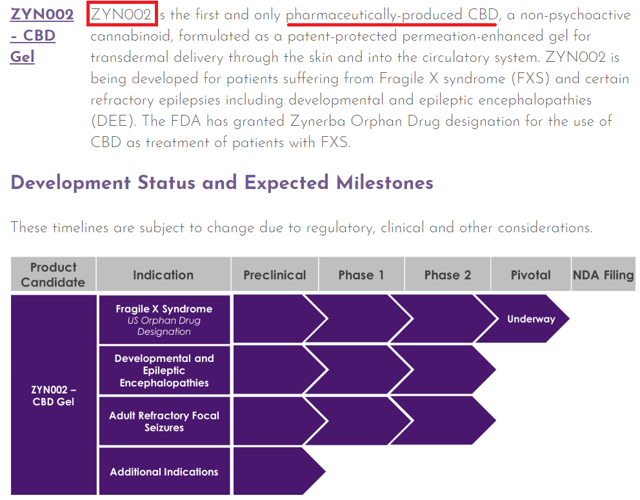 What does it mean? CV Sciences is trading at a rich valuation because it commercizales CBD formulations, not because it conducts research. Bear in mind that CV Sciences trades at 17x its book value per share, which is 8.5x the multiple of ZYNE. With that in mind, saying that the bull case is based on the patents of CV Sciences does not seem correct.

Does buying the dip seem interesting on this name? The company is cheaper than INSY, but it trades at a discount as compared to GWPH. With that, the investors need to note that the marijuana industry trades very high, so the risk seems considerable.

Did The Company Commit Securities Fraud?

As noted before, CV Sciences did not seem to lie in its annual report. It did not seem to claim patents that it did not have. Most investors seem to agree with this thesis. The image below shows a comment from a well known forum, which seems to express well the feeling of shareholders:

Additionally, as of today, not many law firms initiated investigations after the communication of Citron Research. Google shows that only one law firm initiated an investigation. It does not mean that CV Sciences is doing things correctly. However, many law firms would sue the company if the fraud was clear. 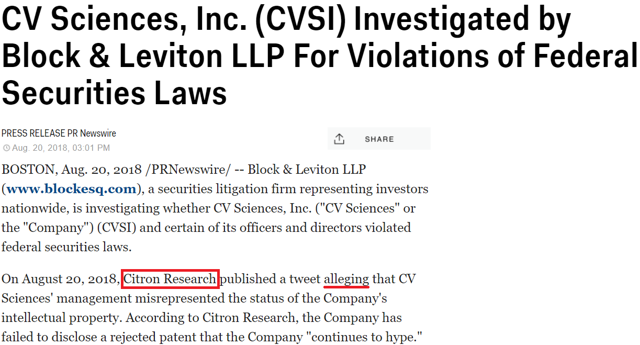 The market erosion seems too large. CV Sciences trades at 5.42x sales because of the commercialization of CBD formulations, but not because of its patents. With this in mind, the management of CVSI needs to stand out and explain whether it omitted certain information about its research development activities. It will help restore confidence after the collapse in the stock price. Doing nothing until the company releases further information on this matter seems the way to proceed right now. The stock could be very volatile and risky in the following days.