By Raphael Bostic, president and chief executive officer of the Atlanta Fed

As I make the rounds throughout the Sixth District, one of the most common questions I get these days is how Federal Open Market Committee (FOMC) participants interpret the flattening of the yield curve. I, of course, do not speak for the FOMC, but as the minutes from recent meetings indicate, the Committee has indeed spent some time discussing various views on this topic. In this blog post, I'll share some of my thoughts on the framework I use for interpreting the yield curve and what I'll be watching. Of course, these are my views alone and do not reflect the views of any other Federal Reserve official.

Many observers see a downward-sloping, or "inverted," yield curve as a reliable predictor for a recession. Chart 1 shows the yield curve's slope - specifically, the difference between the interest rates paid on 10-year and 2-year Treasury securities - is currently around 20 basis points. This is the lowest spread since the last recession. 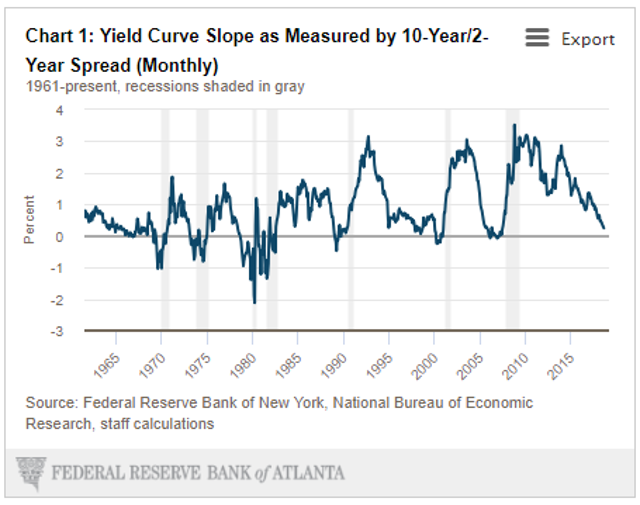 The case for worrying about yield-curve flattening is apparent in the chart. The shaded bars represent recessionary periods. Both of the last two recessions were preceded by a flat (and, for a time, inverted) 10-year/2-year spread.

As we all know, however, correlation does not imply causality. This is a particularly important point to keep in mind when discussing the yield curve. As a set of market-determined interest rates, the yield curve not only reflects market participants' views about the evolution of the economy but also their views about the FOMC's likely reaction to that evolution and uncertainty around these and other relevant factors. In other words, the yield curve represents not one signal, but several. The big question is, can we pull these signals apart to help appropriately inform the calibration of policy?

We can begin to make sense of this question by noting that Treasury yields of any given maturity can be thought of as the sum of two fundamental components:

Among other things, this premium may be related to two factors: (1) uncertainty about how the economy will evolve over that maturity and how the FOMC might respond to events as they unfold and (2) the influence of supply and demand factors for U.S. Treasuries in a global market.

Let's apply this framework to the current yield curve. As several of my colleagues (including Fed governor Lael Brainard) have noted, the term premium is currently quite low. All else equal, this would result in lower long-term rates and a flatter yield curve. The term premium bears watching, but it is unclear that movements in the premium reflect particular concerns about the course of the economy.

I tend to focus on the other component: the expected path of policy. When we ask whether a flattening yield curve is a cause for concern, what we are really asking is: does the market expect an economic slowdown that will require the FOMC to reverse course and lower rates in the near future?

The eurodollar futures market shows us one measure of the market's expectation for the policy rate path. These derivative contracts are quoted in terms of a three-month rate that closely follows the FOMC's policy rate, which makes them well-suited for this kind of analysis. (Some technical details regarding this market can be found in a 2016 issue of the Atlanta Fed's "Notes from the Vault.")

Chart 2 illustrates the current estimate of the market's expected policy rate path. Read simply, the market appears to be forecasting continuing policy rate increases through 2020, and there is no evidence of a market forecast that the FOMC will need to reverse course in the medium term. However, the level of the policy rate is lower than the median of the FOMC's June Summary of Economic Projections (SEP) for 2019 and 2020.

Once we get past 2020, the market's expected policy path flattens. I read this as evidence that market participants overall expect a very gradual pace of tightening as the most likely outcome over the next two years. Interestingly, the market appears to expect a slower pace of tightening than the pace that at least some members of the FOMC currently view as "appropriate" as represented in their SEP submissions.

For this measure, I find the short-term perspective most informative. As one looks further into the future, the range of possible outcomes widens, as many of the factors that influence the economy can evolve and interact widely. Thus, the precision of any signal the market is providing about policy expectations - if indeed there is any signal at all - is likely to be quite low. 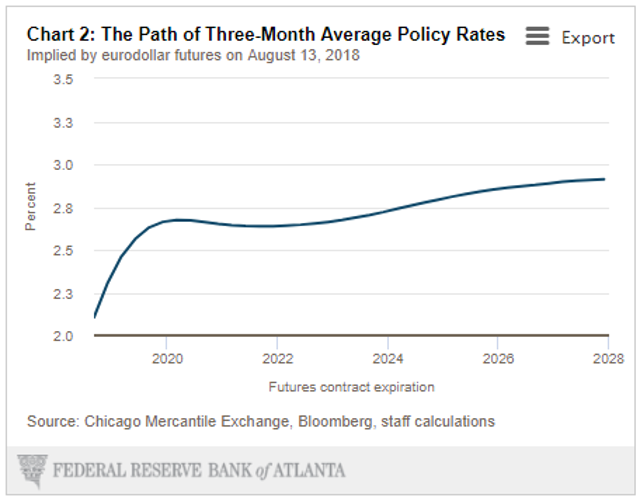 With this information in mind, I do not interpret that the yield curve indicates that the market believes the evolution of the economy will cause the FOMC to lower rates in the foreseeable future. This interpretation is consistent with my own economic forecast, gleaned from macroeconomic data and a robust set of conversations with businesses both large and small. My modal outlook is for expansion to continue at an above-trend pace for the next several quarters, and I see the risks to that projection as balanced. Yes, there are downside risks, chief among them the effects of (and uncertainty about) trade policy. But those risks are countered by the potential for recent fiscal stimulus to have a much more transformative impact on the economy than I've marked into my baseline outlook.

I believe the yield curve gives us important and useful information about market participants' forecasts. But it is only one signal among many that we use for the complex task of forecasting growth in the U.S. economy. As the economy evolves, I will be assessing the response of the yield curve to incoming data and policy decisions along the lines I've laid out here, incorporating market signals along with a constellation of other information to achieve the FOMC's dual objectives of price stability and maximum employment.