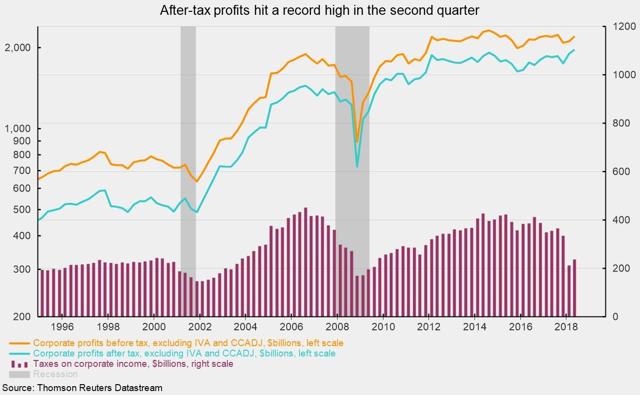 Revised estimates show the U.S. economy grew at a 4.2 percent annual rate in the second quarter, better than the initial estimate of 4.1 percent. In general, the revisions were small. The most significant upward revision was to business fixed investment in software. Business fixed investment in equipment was also revised higher. Imports were revised lower, which adds to GDP growth. Price indexes were marginally higher compared to the prior estimates, and the rate of increase remains moderate.

Included with Wednesday's release were estimates of corporate profits. Corporate profits after tax on a NIPA (national income and product accounts) basis rose 2.4 percent in the second quarter following an 8.2 percent rise in the first quarter. From a year ago, profits are up a robust 16.1 percent. Removing inventory-valuation adjustments (IVA) and capital-consumption adjustments (CCADJ) made for NIPA accounting methods - bringing the figure closer to private sector accounting standards - after-tax profits rose 3.7 percent in the second quarter following an 8.5 percent gain in the first quarter. After-tax profits on this basis totaled $1,968.5 billion at an annual rate, a new record (see chart). After-tax profits are benefiting from strong economic growth and from recent cuts to corporate tax rates. Solid corporate-profit growth helps support future hiring and investment as well as supporting stock prices.

Business fixed investment decelerated to an 8.5 percent pace of growth in the second quarter from 11.5 percent growth in the first quarter as spending on structures rose 13.2 percent; equipment investment decelerated to 4.4 percent growth; and investment in intellectual property products rose at an 11.0 percent pace. Residential investment, or housing, fell at a 1.6 percent annual rate in the second quarter, the second decline in a row following an 11.1 percent gain in the fourth quarter of 2017.