When it comes to leveraged ETFs, two of the more popular myths are as follows:

"If you hold them for more than a few days, you will lose money."

Fact or fiction? You be the judge...

From this one chart, we can say two things:

That's not to say that leverage is without risk - there is much risk in using 3x leverage - just that the source of that risk does not come from some inherent decay.

What does cause significant problems for constant leverage over time? Volatility.

Daily re-leveraging (to 2x, 3x, etc.) combined with high volatility creates compounding issues, often referred to as the "constant leverage trap." When the path of returns is not trending but alternating back and forth between positive and negative returns (seesawing action), the act of re-leveraging is mathematically destructive. The reason: you are increasing exposure (leveraging from a higher level) after a gain and decreasing exposure (leveraging from a lower level) after a loss, again and again.

The opposite of this harmful scenario is an environment that is friendly to leverage: uptrends with streaks in performance and low volatility.

As we illustrated in the paper "Leverage for the Long Run," these concepts are related. When the Nasdaq 100 is in an uptrend (e.g., above its 200-day moving average), it tends to have lower volatility and more streaks in performance (consecutive up days). These factors are helpful when using leverage.

So, what's the catch? Why doesn't everyone just buy and hold leveraged ETFs like TQQQ?

Well, for one thing, they can't stomach the volatility. This has been one of the lowest-volatility periods in market history, and TQQQ still has annualized volatility of over 49% since its inception.

Volatility cuts both ways, and most investors would have a hard time sitting through the higher drawdowns that go hand-in-hand with increased leverage. Even in an extended period of tranquility for U.S. equities, drawdowns for the 3x leveraged Nasdaq 100 have been considerable (a maximum of 45% back in 2015-2016, with many 20+% declines). 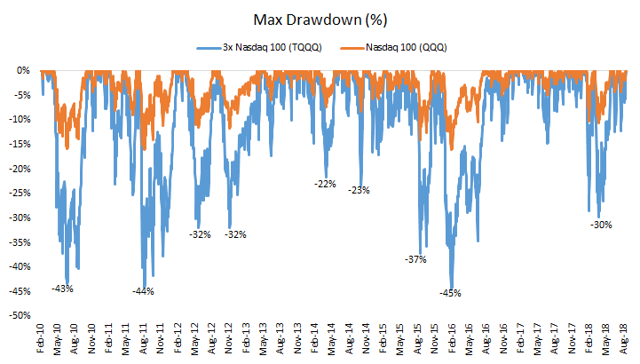 In an average bear market, investors can easily expect a drawdown in excess of 75% using 3x leverage. In a more severe bear market, the damage can be nearly impossible to come back from. Had the 3x leveraged Nasdaq 100 ETF been around in March 2000, it would have lost over 99.95% during the ensuing bear market that took the Nasdaq 100 down by more than 80% to its low in October 2002.

A 99.95% loss requires a gain of 200,000% just to break even. Needless to say, a 200,000% return doesn't happen overnight. At an 8% annual return, it would take almost 100 years of compounding to hit 200,000%. That assumes a straight line, which is not the way markets work. If there's another crippling bear market with high volatility in that 100-year period (a near certainty), this timeline could very well be extended for another century.

A visual of this concept may be more instructive. While after the 2000-02 bear market the Nasdaq 100 hit a new total return high in February 2015 (orange line in chart below), a hypothetical 3x leveraged exposure would still be 91% below its March 2000 high (blue line in chart below). The incredible rally since March 2009 is barely noticeable. That is the math behind of gains and losses, where the percentage gain required to make up for a loss increases exponentially as the loss approach 100%. 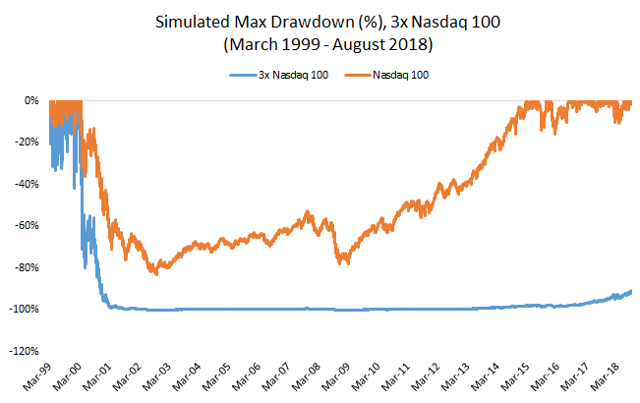 Still, given the right environment (uptrends with low volatility), investors can certainly buy and hold a 3x leveraged exposure for years on end and make tremendous gains. The past 9 years have been a testament to that fact. It is a myth to say otherwise.

The real problem with a 3x leveraged buy-and-hold strategy is that it magnifies the primary issue with unleveraged buy-and-hold: that it is hard to hold through large drawdowns. Many investors do not have the temperament to deal with a 20% decline, let alone 40%, 60%, 80% or 99.5%.

We haven't had to worry much about declines in recent years, but risk has not been eradicated. There is no free lunch in markets, and the use of leverage to amplify returns is no exception to this rule. Those tremendous gains experienced in recent years will be followed at some point by tremendous losses. If that fact sounds unappealing to you, now would be a good time to take a hard look at your portfolio and understand the risks you are taking.