On the consumer side, motor vehicle sales for August came in at 16.69 million annualized. That is essentially equal to July's number. July and August are also, bar one month last year, the worst months since the beginning of 2015.

This is important, because vehicles and houses are the two biggest durable goods purchases made by consumers, and they are the first to flag before a recession. Over 10 years ago, in his paper "Housing IS the Business Cycle," Prof. Edward Leamer identified the sequence as: first housing turns, then vehicle sales turn, then consumer nondurables turn.

The below graph shows the order for houses (green), vehicles (blue), and real retail sales ex vehicles (red) for the last 20 years:

But a close-up on housing (red) and vehicles (blue) for the last 3 years shows that as of July, both were actually lower than during summer 3 years ago:

It looks quite clear that motor vehicle sales have peaked for this expansion.

As to housing, July residential construction spending (blue in the graph below), also reported yesterday, continues to show modest but substantially decelerating YoY improvement, much as do single family housing permits (red):

And in absolute levels it is lower than earlier this year:

Residential construction spending, while it is not so leading as housing sales, permits, or starts, has the distinct virtue of being the least volatile series of all housing data, so the fact that it may be peaking is quite significant.

Hot Production Comes with a *

But if the consumer shows signs of flagging, yesterday's ISM manufacturing report was, once again, white hot (h/t Briefing.com): 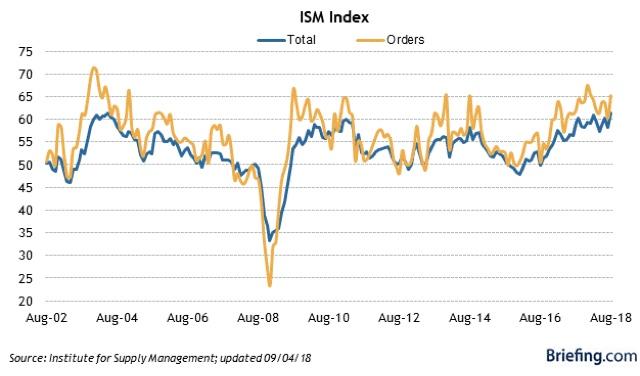 The new orders component of this report is a short leading indicator, so this suggests that production and employment are going to remain quite strong in the next few months.

And now, the * part. I dislike cherry-picking, and prefer to let data speak for itself. But this comment, made by the ISM itself, can't be overlooked for significance:

Respondents are again overwhelmingly concerned about tariff-related activity, including how reciprocal tariffs will impact company revenue and current manufacturing locations. Panelists are actively evaluating how to respond to these business changes, given the uncertainty.