To say there is a lot of noise around Tesla (NASDAQ:TSLA) might be underselling it a bit. However, despite what we all may think of Elon Musk's often-erratic tweets, Tesla is ultimately a car company. One of their biggest constraints is the production of vehicles, especially the Model 3.

This article is an attempt to divine Tesla's production and deliveries for Q3/18 based on available sources including quarterly update letters, the Bloomberg tracker, an Electrek article, and Inside EVs US sales data.

Based on all those sources, I estimate Tesla's production and deliveries in Q3/18 to be:

(Author based on the estimates herein)

(Author based on estimates herein; figures are in $000's) 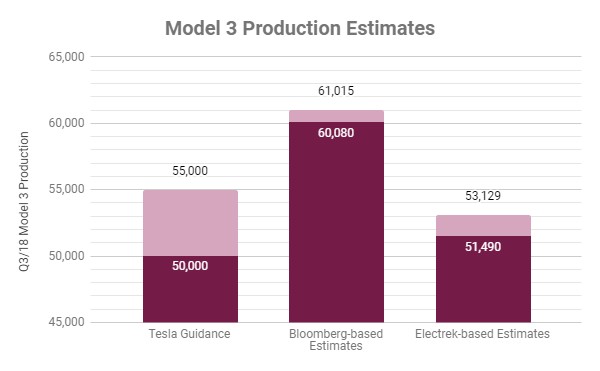 (Author based on estimates below)

"Having achieved our 5,000 per week milestone, we will now continue to increase that further, with our aim being to produce 6,000 Model 3 vehicles per week by late August. We then expect to increase production over the next few quarters beyond 6,000 per week, while keeping additional capex limited. We believe that increasing capacity by improving utilization of our existing lines and making selective improvements to address bottlenecks rather than creating entirely new duplicated lines will be the most capital efficient approach.

We aim to increase production to 10,000 Model 3s per week as fast as we can. We believe that the majority of Tesla’s production lines will be ready to produce at this rate by end of this year, but we will still have to increase capacity in certain places and we will need our suppliers to meet this as well. As a result, we expect to hit this rate sometime next year."

Late August has come and gone, and it appears that Tesla has failed to reach its aim of 6,000 Model 3 vehicles/week. Prominent Tesla Twitter commentator @skabooshka estimates production of ~3,500 to 4,000/week: 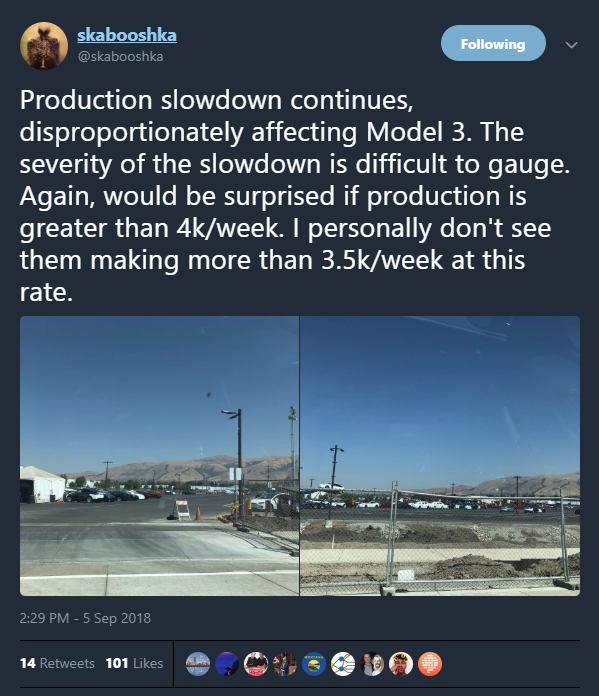 For their part, Bloomberg's Model 3 Tracker suggests that Tesla produced 6,277 vehicles in a single week in late August although production both before and after that week was significantly less than 6,000 vehicles. Meanwhile, Electrek suggests that Tesla is on track to its 50,000 to 55,000 vehicle quarterly target, but missed its 6,000/week target.

(Author based on Bloomberg Model 3 Tracker)

(Author based on Bloomberg Model 3 Tracker)

Meanwhile, in the Electrek article, Tesla was said to have produced:

"That said, overall production for the quarter is now trending toward Tesla’s quarterly goal.

Electrek also noted that during the last week of August, Tesla produced ~6,400 vehicles including ~4,300 Model 3 vehicles.

(Author based on Electrek article)

Note that these estimates are based on the last-week-of-August production. We can also estimate production based on average production to date this quarter, resulting in slightly different estimates:

(Author based on Electrek article)

Given the large difference between these two figures, it is instructive to look to Tesla's guidance for help. Tesla's guidance is for 50,000 to 55,000 vehicles. Based on that guidance and skabooshka's Twitter account, I would expect the Electrek figures to be more accurate than the Bloomberg figures.

Electrek also gives us guidance of ~27,000 Model S/X vehicles produced during Q3/18. That figure falls in line with Tesla's expectations for Model S/X deliveries for 2H/18. (Note that Tesla is only guiding on deliveries, not production of the Model S/X, so there could be some differences between production and deliveries.)

"Model S and Model X deliveries should accelerate in the second half of this year as we have now finished realigning our delivery process. While historically most deliveries were made towards the end of each quarter, our delivery pattern should smooth out in the next two quarters. Our target of delivering 100,000 Model S and Model X vehicles this year remains unchanged."

Tesla had delivered ~44,000 Model S and Model X vehicles in 1H/18. Therefore, Tesla's implied target is delivering ~28,000 Model S/X vehicles/quarter for Q3/18 and Q4/18. This target lends a bit of security to this estimate of S/X production: It is very close to Tesla's guidance on deliveries, so we might expect that those figures are also reasonably realistic.

As usual, bulls and bears are likely to have divergent views on Tesla's productions and how to extrapolate - or not - from these figures. Tesla's lower-than-expected weekly Model 3 production, although in-line quarterly production, may also have a negative impact on Model 3 gross margins.

We will find out in a few weeks.

"Now that we have reached a production rate of 5,000 Model 3 vehicles per week, we are focused on further ramping production, and achieving profitability and continuous cost efficiencies. We expect to produce 50,000 to 55,000 Model 3 vehicles in Q3, which will represent an increase of 75% to 92% from the prior quarter. Deliveries should outpace production in Q3 as our delivery system stabilizes. Model 3 gross margin should grow significantly to approximately 15% in Q3 and to approximately 20% in Q4 predominantly due to continued reduction in manufacturing costs and to some extent an improving mix."

Accordingly, Tesla should be viewed as guiding to - at minimum - 50,001 to 55,001 Model 3 deliveries with a mid-point of 52,501. Of course, they expect deliveries to outpace production by more than a single car - they wouldn't be confident enough to expect outpacing if it was going to be by a single car - but it isn't possible to know just how much they expect deliveries to outpace production. One view might be that Tesla expects to deliver at least 55,000 Model 3 vehicles in Q3/18, but this is not the only delivery total that would satisfy their guidance.

From Inside EVs, we can see the following monthly delivery totals for Tesla's vehicles in the United States:

However, Tesla has guided that this in-quarter seasonality will lessen in the back half of 2018:

"While historically most deliveries were made towards the end of each quarter, our delivery pattern should smooth out in the next two quarters."

Therefore, there is reason to suspect that Tesla's deliveries in 9/18 might be more like those earlier in the quarter than we would expect in other quarters. I thus propose three alternative methods of extrapolating United States deliveries for 9/18:

The first approach results in wildly unrealistic delivery totals for the Model S and Model X of ~17,000 and ~23,000, respectively. Neither total is possibly correct - both are far too high and dramatically exceed production. Meanwhile, it projects Model 3 deliveries of ~59,000, which is semi-plausible but still likely to be too high.

(Author's estimate; not plausible, but just to show lack of plausibility)

I will disregard these estimates - in my view, Tesla has smoothed out their delivery pattern, as expected.

Both of the other two estimation techniques above result in more conservative and better estimates. I strongly suspect they are much more realistic for the Model S and Model X, although they may be too low for the Model 3. The argument is that Model 3 production and deliveries are still ramping up, while Model S and Model X are mature, and their delivery patterns have "smooth[ed] out" much more than the Model 3 delivery patterns.

In both estimates, the "US%" column refers to the percentage of Tesla sales of the given vehicle that were made in the United States. For each of the Model S and Model X, that percentage is an average of Q1 and Q2 (comparing Inside EVs US sales figures to Tesla's announced deliveries) while for the Model 3, only Q2/18 is included (because 100% of Q1/18 deliveries were made in the United States).

Both estimates result in Tesla ~meeting their guidance for Model 3 deliveries as well, with deliveries of ~54,800 to 56,800 Model 3 vehicles.

In my view, the second and third estimates are much more likely to be accurate than the first estimate. This indicates that Tesla has largely eliminated their prior irregular delivery schedule.

Based on the above estimates, it may be fair to expect:

(Author based on the above estimates)

In this estimate, the Model 3 built estimate is a 2/3 weighting to Electrek and 1/3 to Bloomberg while the Model S/X built estimates are based on Electrek. Meanwhile, the sold estimates used here are both based on Inside EVs and are an average of method 2 and method 3 above.

I believe that the Model 3 built estimate may still be a bit too high - it is possible that a better estimate would disregard the Bloomberg tracker entirely.

In my prior work on Tesla - see "How Tesla Makes A Profit This Quarter" - I provided a methodology for how we might estimate Tesla's sale prices on the S/X, the Model 3, and also possible gross margins and operating costs for the company. For those interested in modeling Tesla's quarter in more depth, I would recommend reading that article. Simply plugging in these sales figures into the model from that article, with 15% gross margins on the Model 3, we find Tesla could potentially make a profit of ~$43 million:

(Author based on estimates herein; all but avg price in $000's)

The most questionable part of this model - although all parts are subject to a great deal of error - is the gross margins on the Model 3. As described above, Model 3 production is not going at the weekly rate that Tesla hoped - they have probably not hit 6,000/week by late August as was their aim. Since production is slow, it stands to reason that production may also be more expensive.

Here are possible Tesla profits and losses based on the same model, but with lower gross margins on the Model 3:

(Author based on estimates herein; figures are in $000's)

Tesla's success or failure in making a profit this quarter will come down to gross margins on the Model 3, in addition to Tesla's other levers, like ZEV credits.

Whether or not Tesla makes a profit, their net margins are very small, and they are likely to ~break-even.

Did you enjoy this article? Please consider clicking "Like" or giving me a "Follow" to receive alerts when I post new articles. I also welcome all constructive feedback in the comments below. Thanks for reading and be nice to each other in the comments.