Sangamo (NASDAQ:SGMO) released highly anticipated clinical data of SB-913 using ZFN gene-editing technology (Press release) for MPS II on Sep 5, 2018. It attracts huge attention in the gene-editing field as the first in vivo gene-editing therapy trial in the US. The mixed early clinical results presented at the 2018 Annual Symposium of the Society for the Study of Inborn Errors of Metabolism (SSIEM) resulted in >30% drop of stock price in two days after the results were released. In my opinion, it is due to lack of deep understanding of the imperfect clinical results and this sell-off provides a good entry point. This article aims to provide data mining and in-depth analysis to better understand the clinical results.

Mucopolysaccharidosis (MPS) type II is a genetic lysosomal storage disease caused by deficiency of the iduronate-2-sulfatase (IDS) enzyme which is needed to break down or recycle glycosaminoglycans (GAGs) dermatan sulfate and heparan sulfate. Lack of IDS enzyme in humans will cause accumulation of those toxic waste products and lead to tissue/organ damage, and significantly shorten life span for severe patients.

SB-913 is being developed using a zinc-finger nuclease (ZFN) based gene-editing technology by integrating the hIDS gene into liver hepatocytes. Three dose cohorts with 2 subjects in each were dosed with SB-913 so far, and the data from the first 5 subjects were reported.

Overall, the early clinical data achieved its primary objective, which was to evaluate the safety and tolerability of SB-913. All study drug-related adverse effects (AEs) were mild. No dose-dependent adverse effect was observed. Alanine transaminase/Aspartate transaminase (ALT/AST) increases were found in one out of five patients, but the increase was transient and the liver function abnormality spontaneously resolved after one week. No AEs were observed for the high dose (5x of middle dose) albeit of the caveat of only one patient so far (Company presentation).

The key arguments of the clinical data come from two secondary objectives, which are Urine GAG levels and Plasma IDS activity.

The current standard of cure for MPS II is enzyme replace treatment by using Elaprase (idursulfase). The dose is a fixed 0.5 mg/kg and the dosing regimen is intravenous infusion once per week (Prescription info). Urine GAG is a good biomarker which has been used in the New drug application (NDA) of Elaprase (idursulfase) representing the biological effect. All patients were receiving SB-913 while continuing this weekly ERT in this trial (due to ethical reason). All those patients were screened to have stable and responsive ERT response before enrolling in the study (2017 2Q Earning call). One of the exclusion criteria for patients in the clinical trial is “known to be unresponsive to ERT” (ClinicalTrials.gov Identifier: NCT03041324).

Based on the efficacy data from Elaprase (idursulfase), Urinary glycosaminoglycans (GAG) were reduced within 2 weeks of initiating idursulfase and were decreased 49% after 48 weeks of treatment (Muenzer et al., 2007). So, built upon the existing 49% reduction obtained from ERT, SB-913 achieved an additional 51% reduction on top of it.

Simple math shows that approximately a mean of 75% reduction (49% + 51%* (1-49%) =75%) of Urine GAG levels was achieved in the cohort 2 (mid-dose) compared to the original GAG level for MPS type II patients prior to any treatment.

From the FDA website, we found detailed Urinary GAG data filed in 2006 for Elaprase’s NDA. Three key pieces of data shown below could further help investors understand this remarkable and clinically significant urine GAG reduction achieved by in vivo gene-editing in humans.

i. % patients in the ERT who had urinary GAG levels fall to below the upper limit of normal 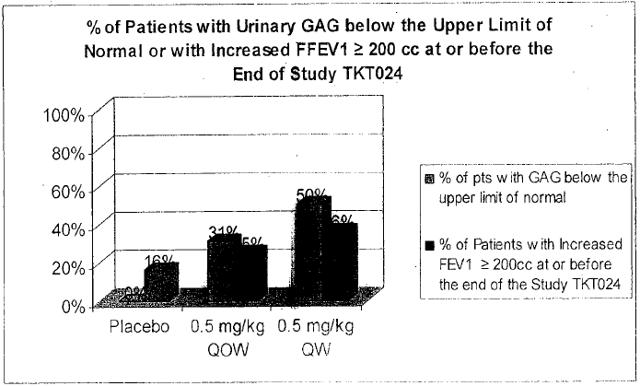 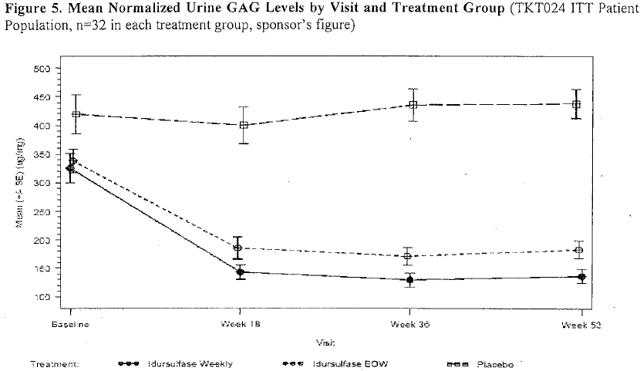 Based on the results from i and ii, the mean urinary GAG level is 422* (1-75%) = 106 GAG/mg creatinine after the additional reduction achieved by this gene-editing effect, which is lower than the upper limit of normal (defined as 126.6 µg GAG/mg creatinine).

iii. dose-dependent ERT on urinary GAG reduction and the maximum reduction achieved in the highest dose

The mean baseline urine GAG levels fell by 41%, 44% and 62% in the 0.15, 0.5, and 1.5 mg/kg dose group of Elaprase (idursulfase). It is worth to note a dose-dependent effect of ERT was observed on the biomarker for urine GAG level. Furthermore, even 1.5 mg/kg of Elaprase (idursulfase) only reached 62% of reduction of urine GAG, which is less than 75% of reduction (estimated above) achieved by SB-913 (mid dose) plus 0.5 mg/kg of Elaprase. It further strengthens the evidence that in vivo gene-editing is successful.

In addition to the dose-dependent effect on the reduction of urine GAG levels between Cohort 1 (5.0 E12 vg/kg) and Cohort 2 (1.0 E13 vg/kg), the consistent % changes from baseline observed over 4 months demonstrate the improvement is most likely real instead of an artifact caused by measurement variability. The % changes hover around zero in 4 months for Cohort 1 whereas % changes are relatively consistent within 30-60% range over 4 months. The sample labeled with * obtained 4 days after hospitalization for severe adverse effect of atrial fibrillation, and might be an outlier for this reason. Similarly, dermatan sulfate and heparin sulfate show consistent % changes over 4 months, further de-risking the concern of measurement variability. 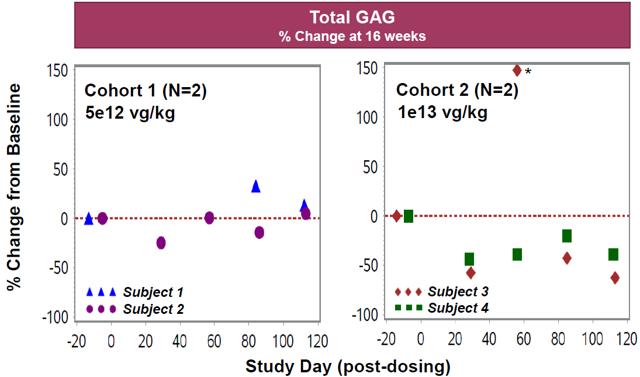 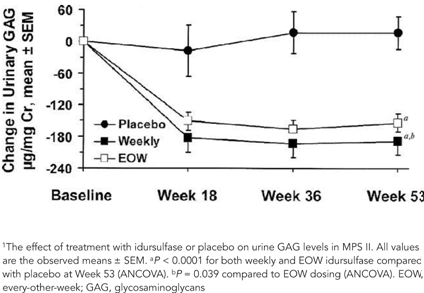 Previous ERT data on the change of urine GAG further confirmed that the change in urine GAG after ERT is very stable over time, and investors should not worry much about the variability on the baseline as well as each time point.

The key reason for the stock price drop is the negative interpretation of undetectable plasma IDS activity. This is the question many investors/analysts raised after the data presentation in terms of the concern/uncertainty whether the gene editing in the liver hepatocytes is successful to produce IDS. So far there are two possible explanations for this discrepancy between plasma IDS activity and Urinary GAG change.

1) The enzymes (IDS) released from liver are immediately taken up by other tissues, resulting in undetectable plasma IDS even after a successful in vivo gene-editing.

2) The plasma IDS assay is not set up appropriately to be able to measure a reasonably low level of IDS in plasma, even if its level is higher than the value prior to the SB-913 treatment.

The first explanation does not hold strongly. IDS follows certain distribution in the body. It has the greatest level in the liver but also achieves equilibrium between blood circulation and tissues over time (the ratio of IDS between tissue and blood should be relatively stable based on the principle ADME (absorption, distribution, metabolism, and excretion) understanding. Therefore, if gene editing is successful as the urinary GAG data suggest in Cohort 2 (mid-dose), certain IDS level circulation in the blood is expected even if the concentration might be low. 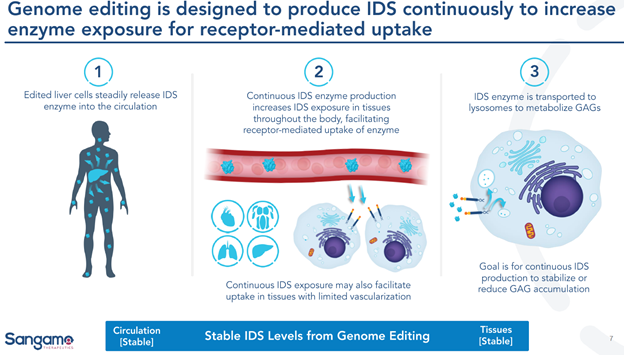 A close look at the current lower limit of detection, 5.2 nmol/hr/mL (equivalent to 5.2 µmol/hr/L), further confirmed the second hypothesis indicating the assay itself was not set up correctly to be able to measure the low level of IDS in plasma. 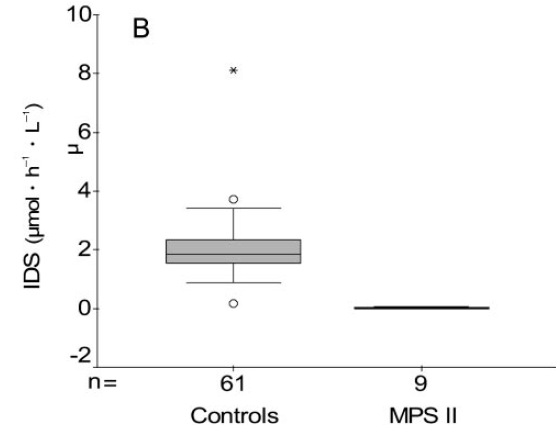 Another paper showed the plasma IDS activity is in the range of 0.2-0.8 µmol/hr/L in MSP II neonates, whereas the values are in the range of ~5- ~50 µmol/hr/L for random neonates. We realized four patients tested in the clinical trial are adults but the enzyme activity of IDS showed no apparent difference between neonates and adults Mashima et al., 2018.

The enzyme activity results might vary among different experiment settings including substrate choice/concentration, incubation time, and instrument used to detect enzyme metabolite products. However, combining both reported data together, it is fair to conclude the current assay with a detection limit of 5.2 µmol/hr/L is unable to pick up improvement of plasma IDS activity in MSP II patients if the improvement is less than 5-fold (based on the observation that the IDS activity is less than 1 µmol/hr/L in MSP II neonates and adults).

According to 2018 Wells Fargo Healthcare Conference on Sep 6, 2018, the CEO acknowledged that it was a mistake that the company did not set up the assay sensitivity appropriately to be able to detect the low level of plasma IDS activity. He promised to go back to improve the method sensitivity and hopefully to show small fraction of plasma IDS activity soon. In addition, the CEO mentioned liver biopsy will be conducted in the future study, which will shed light on liver IDS activity to demonstrate the enzyme level improvement in tissues after gene-editing which might be more relevant than plasma IDS activity.

Based on the mouse model data Sangamo reported before, there are significant improvements of plasma IDS activities after a successful integration of hIDS cDNA into mouse liver hepatocytes. If we expect a similar translation from the mouse model to human (not exactly 1:1 translation in terms of the dose and efficacy), we might be able to see some improvement on the plasma IDS activity compared to the original baseline from MPS II patients at cohort 2 (mid-dose) and 3 (high dose). However, as management and other experts indicated in the past, 2% or 5% of plasma IDS activity after a successful gene-editing in hepatocytes compared to healthy subjects is likely to have clinically meaningful benefit if it’s circulating continuously, being produced by the liver (Earnings Call 2017 2Q). Therefore, we should not expect a huge improvement of plasma IDS activity (5-10 fold), but definitely we should see some difference if the sensitivity of assay is set up correctly.

We are confident on the interpretation of this early clinical readout based on the thorough analysis presented in this article but keep in mind risks always exist in the early clinical stage. The positive results were mainly from one dose (mid-dose) and only four patients data were reported. We need to confirm the clinical results by another efficacious dose which is cohort 3 early next year.

We are pleased to see good safety/tolerability data in this early clinical readout for the first gene-editing therapy in the US. The presentation of efficacy data caused some confusion which leads to uncertainty of the gene-editing effect in humans, but our in-depth analyses reveal the positive results on dose-dependent urinary GAG changes are real and clinically significant, indicating a successful gene-editing at Cohort 2. Undetectable plasma IDS activity was most likely attributed to a poor assay, which did not provide enough sensitivity from the very beginning. We are optimistic on the upcoming cohort 3 data and looking forward to confirming our analysis there.

Disclosure: I am/we are long SGMO. I wrote this article myself, and it expresses my own opinions. I am not receiving compensation for it (other than from Seeking Alpha). I have no business relationship with any company whose stock is mentioned in this article.

Additional disclosure: Opinions offered here are not personalized recommendations. Readers are expected to do their own due diligence or consult an investment professional if needed prior to making investment decisions. Although I do my best to present factual research, I cannot guarantee the completeness or accuracy of the information due to complexity involved in biotech section in general.