The Consumer Price Index for All Urban Consumers (CPI-U) increased 0.2% in August on a seasonally adjusted basis, the U.S. Bureau of Labor Statistics reported today. Over the last 12 months, headline inflation rose 2.7%.

Energy and shelter costs were the main contributors to rising costs in August, the BLS reported. Gasoline prices were up 3.0% for the month, and are up 20.3% over the last 12 months. The shelter index increased 0.3% in August, the same increase as in July. Rents were up 0.4%. Food prices were up a moderate 0.1%.

So today's inflation report continues to point to moderate inflation that seems to be stabilizing in a range between 2.2% and 2.8% a year. This chart, showing annual inflation numbers over the past year, shows the stead rise through mid-summer and then the dip in August:

What this means for Social Security

The 2019 cost-of-living increase for Social Security will be determined by the average of the Consumer Price Index for Urban Wage Earners and Clerical Workers (CPI-W) over the months of July, August and September. (I explained this process in an August 1 article.)

The BLS set the CPI-W index for August at 246.336, 2.9% higher than the index for August 2017. But that annual increase is not totally relevant to the 2019 COLA calculation, because of the three-month average calculation. At this point, with one month remaining, the Social Security COLA would be 2.7%, less than my 3.0% prediction back on August 1. Here are the numbers so far: 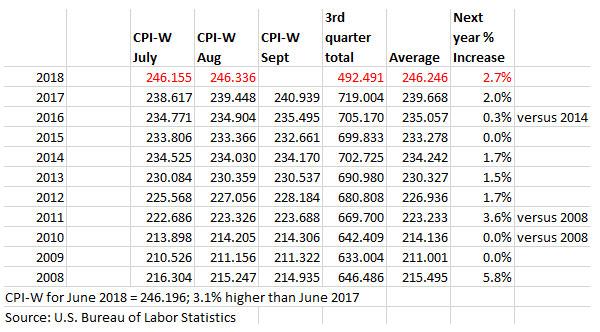 I'll point out that in September 2017, CPI-W rose a strong 0.6% because of the aftermath of Hurricane Harvey in Texas, which shut down oil operations. The gasoline index increased a massive 13.1% in September 2017; that increase seems unlikely to be repeated in 2018. So we are probably looking at a Social Security COLA under 3.0% for 2019. But with inflation forecasts, you can never be sure.

What this means for TIPS and I Bonds

Investors in Treasury Inflation-Protected Securities and U.S. Series I Savings Bonds are also interested in non-seasonally adjusted inflation, which is used to adjust principal balances on TIPS and set future interest rates on I Bonds. The BLS set the August inflation index at 252.146, an increase of just 0.06% over the July number.

For TIPS. The August number means that principal balances on TIPS will increase 0.06% in October, after a similar paltry 0.01% increase in September. However, over the last 12 months, inflation accruals have increased 2.7%. Here are the new October inflation indexes for all TIPS.

Here are the numbers so far:

Inflation is moderating in mid-2018 and that will take pressure off the Federal Reserve to act rashly to raise short-term interest rates. But I think the Fed will move forward with its plans to raise its Federal Funds Rate twice more in 2018, to a range of 2.25% to 2.50%. That will mean that short-term rates will continue climbing this year. The prospect for longer-term rates remains uncertain.

“We’re not seeing a huge, surprising increase in inflation,” he said. “So there is no reason to be moving with too much alacrity.”