The Federal Reserve system, which was founded on December 23rd, 1913, is the current Central Bank of the United States. Its main function is to help in facilitating a stable yet flexible monetary and banking system as a whole.

The Federal Reserve has this to say this about its inflation target of 2%:

The Federal Open Market Committee (OTCPK:FOMC) judges that inflation at the rate of 2 percent (as measured by the annual change in the price index for personal consumption expenditures, or PCE) is most consistent over the longer run with the Federal Reserve's mandate for price stability and maximum employment.

In subsequent reasons for the 2% inflation rate, it fails to mention what I believe to be the most important reason for there being a 2% inflation targeted rate: To keep people from taking their money out of the bank.

The Monetary Phenomenon of Inflation

This phenomenon works, until it doesn't. For now, it's working. The underlying force that allows it to work is this, and this alone: Confidence.

The biggest contributor - not the only, but the most significant - to the rate of inflation is simply the rate of debt growth per capita minus the rate of productivity. (Productivity increases reduce the amount of capital, energy and time that go into making a good or performing a service, and thus act as a deflationary force on contributions to the Consumer Price Index.)

Here is a chart showing our aggregate debt outstanding in the US, which includes roughly all government, business and consumer debts: 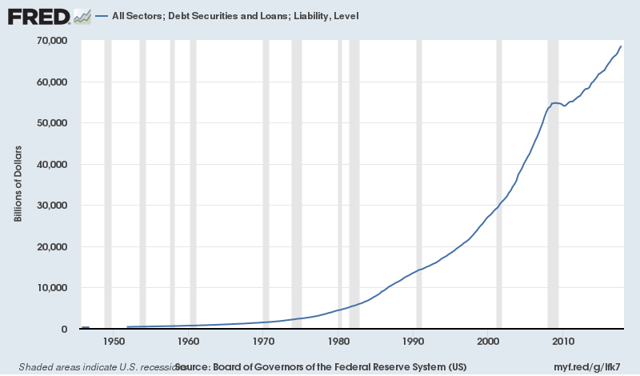 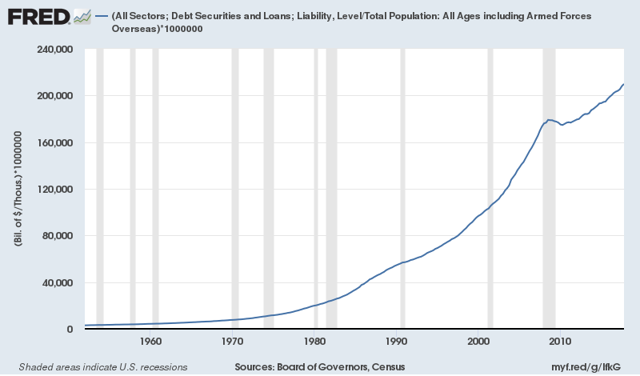 Taking the chart above showing debt per capita and formatting it to a year-over-year percent change compared to the CPI looks like this: 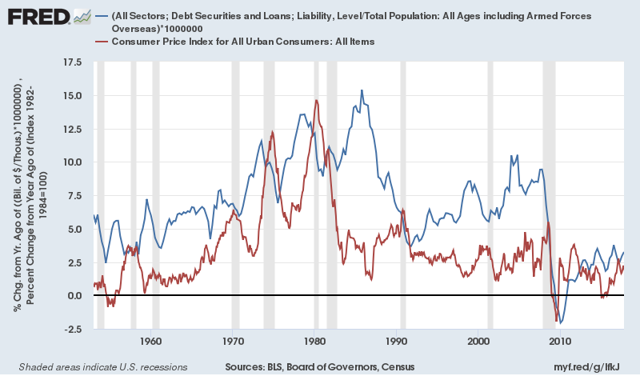 The inflation rate (red line) is generally lower than the total amount of debt that's being created per capita. A substantial reason for this, although certainly not the only one, is the gains in productivity.

By adding the rate of productivity to the rate of inflation, the lines begin to line up much better for visual purposes: 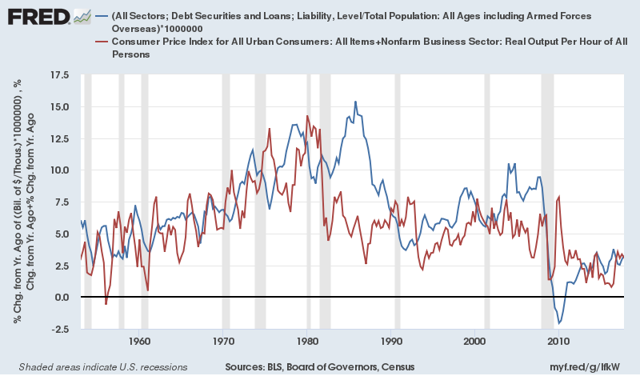 So why the 2% inflation target?

So, we need credit growth to exceed the rate of productivity by at least 2%.

We need a lot of new debt every year!

Debt is created by the issuance of loans at banks. This could be your local savings and loan to the Central Bank itself.

One of the things needed for loans to be issued are base deposits. People and businesses need to keep their savings in banks so that the banks have base deposits on which to issue loans. We need loans, and banks need deposits to make those loans. Frankly, Jimmy Stewart does a good job of explaining that in the bank run scene in It's A Wonderful Life. 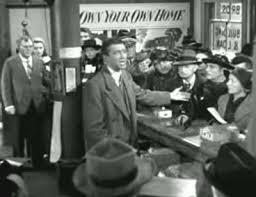 He tells everyone that their money isn't really at the bank, but it's in Joe's house and it's in Kennedy's house.

If prices stayed the same or went down and inflation was instead 0% or less, which would be negative interest rates, then we'd all be less likely to keep our money in the bank. We'd all be storing it in safes and or buried somewhere in our backyards.

See What Happened In Japan

This is what happened in Japan when rates went negative in 2016:

Fortune wrote an article in February 2016 describing how the Japanese were turning to hoarding their yen in safes.

"Following the Bank of Japan’s decision to lower interest rates below zero in January, many consumers have reportedly rushed to hardware stores in search of one thing: Safes.

Negative interest rates mean customers effectively pay a fee for parking cash in banks, so Japanese citizens are beginning to hoard yen, according to the Wall Street Journal, and they need somewhere to put it."

Notice that rates didn't stay negative for too long. They are just high enough to get the people to keep their money in the bank.

The yield of the 10-year government bond in Japan was .11% as of this past August.

Aggregate debt growth has been running around 4% at best in 3 of the past 4 years, and lower in the years before that. 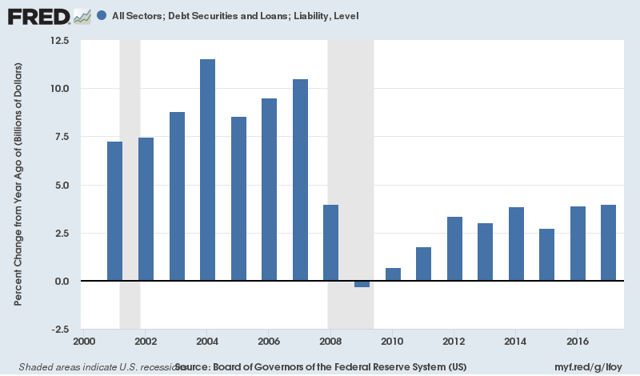 2018 has been a year of stronger-than-normal growth on account of tax cuts, deregulations and sky-high confidence from business owners. This will undoubtedly lead to higher rates of debt growth, and certainly then, a higher rate of inflation than we've been seeing. Although a strong dollar is helping to import, deflation and any gains in productivity will both be helping to tame inflation.

I am looking for close to 5% aggregate debt growth for 2018, which would be an additional $3.4 trillion in debt. That'll put inflation about 2.5-3%, as we are currently seeing.

I hope this article helps shed light on the monetary system, inflation and a better appreciation of our debt growth needs.

Debasing our money 2% every year absolutely entices us to not hoard cash but to have it in the bank earning what little interest we can.

With respect to our debt growth needs, the $1 trillion federal deficits no longer seem so bad when you consider that we may be getting another $2.4 trillion from business, consumer, state and local governments as well.

In the event that aggregate credit growth slows at a rate that is below the rate to borrow money, the ability to service existing debts becomes substantially harder and we'd have defaults across the board.

Jason Tillberg
1.47K Followers
Maker of hardwood roll top bread boxes, self taught in economics with focus on productivity and inflation.44 years old, married, have two daughters 9 and 11, and a 3 year old son. I live upstate New York near Ithaca.My profile pic is that of Joseph, from the story from the old testament, where he is telling the Pharaoh that he will have 7 years of famine and 7 years of plenty and in order to prepare, he would need to save 20% of his surplus during the years of plenty so that he would have not only grain for his nation, but grain to sell to the other nations.It tells the principle that we need to learn to live within the cycles of nature.Investing and allocating money requires that same understanding.With that said, I focus on what I believe the rate of inflation will be and how it relates to investments. I trust that understanding inflation will make for better informed investment decisions.I've been involved in stocks and investing since I was 13. Have had successes and mistakes, that I've hopefully learned from. I'm a fan of the following people to help give a perspective of my biases I may hold with regards to investment and economics: Adam Smith, Milton Friedman, Charles Schwab (Steel Tycoon), Peter Bernstein (Author), Henry Ford, Jay Gould, Ben Franklin, Aristotle, to name a few..
Follow