In an earlier post and Bridge article, I discussed some ways to use nominal GDP (NGDP) as a cross-check on the FOMC "navigating by stars" of r*, u*, and y*. The motivation for these pieces was Fed Chair Jay Powell's concerns about the challenge of using these star variables when they seem increasingly in flux. Here, again, is a key excerpt from his talk:

Navigating by the stars can sound straightforward. Guiding policy by the stars in practice, however, has been quite challenging of late because our best assessments of the location of the stars have been changing significantly… the FOMC has been navigating between the shoals of overheating and premature tightening with only a hazy view of what seem to be shifting navigational guides.

The Fed chair is implicitly challenging us to find indicators that shed light on the stance of monetary policy without having to know r*, u*, and y*. The metric I suggested in the earlier pieces was the "sticky-forecast" NGDP benchmark growth path. Here I want to suggest another two measures for the Fed chair.

First, is a Phillips curve-like measure. I am not a fan of Phillips curves, but they remain stubbornly popular among policymakers and the public. They are supposed to show a relationship between the amount of slack in the economy and wage growth. However, most Phillips curves have not done well predicting wage growth (or inflation) over the past few years. Although there are many ways to measure slack in a Phillips curve, typically it is done using the unemployment rate. Attempts to salvage the Phillips curve using other slack measures have been made, like that from Adam Ozimek, Ernie Tedeschi, and Nick Bunker who argue we should use the prime-age employment-to-population (EPOP) rate. Jason Furman, however, pushes back against this and other attempts to better define slack.

If we must stick with Phillips curve to explain wage growth as the FOMC seems intent on doing, here is my suggested approach. Take the spread between the U6 and U3 unemployment rates. This measure, unlike the prime-age EPOP, is stationary and therefore not subject to the Furman critique. Unfortunately, the U6 only goes back to 1994, so not a lot of historical analysis is possible with it. Since that time, the U6-U3 gap seems to be a fairly reliable predictor of wage growth. The figure below plots this relationship. For purposes of comparison, it also highlights the late 1990s (blue) and the more recent years of the wage growth mystery (red). 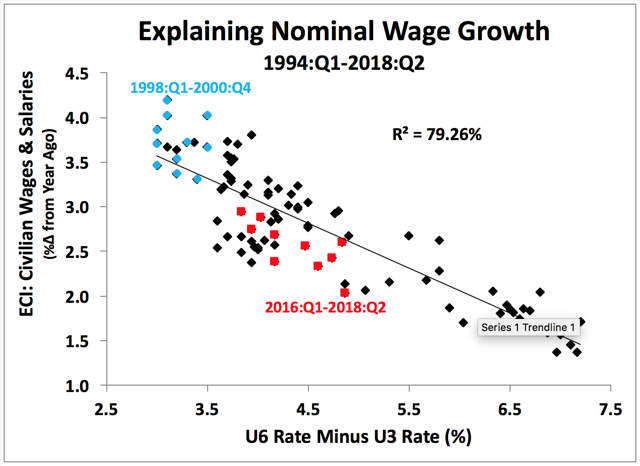 One interpretation of this figure is that even though the U3 unemployment rate is currently low and below u*, the economy is not running as hot as it was in the late 1990s when the U6-U3 spread was even lower than it is now. This complements the message coming from prime-age EOP Phillips curves. This would call, all else equal, for fewer rate hikes rather than more from the Fed.

Okay, enough of Phillips curve. I want to move on to another related indicator, one that does not rely on a measure of slack but is instead tied to monetary conditions. And that is another application of my 'sticky forecast' NGDP gap measure, as explained in this note. NGDP is tied to monetary conditions for several reasons. First, it measures total money spending on the final goods and services produced in the economy. Second, it is equivalent to the velocity-adjusted money supply. NGDP, therefore, is an easy way to get a bird's-eye view of money activity in an economy.

My sticky-forecast benchmark growth measure of NGDP can be subtracted from actual NGDP to get an NGDP gap measure. I replace the U6-U3 spread in the above figure with this NGDP gap measure to get the new scatterplot below. Once again, the late 1990s and more recent years are highlighted for purposes of comparison. And, once again, it suggests that the economy is running cooler now than in the late 1990s. Most importantly, it shows there is a strong relationship between monetary conditions and the nominal wage growth rate. Money still matters. 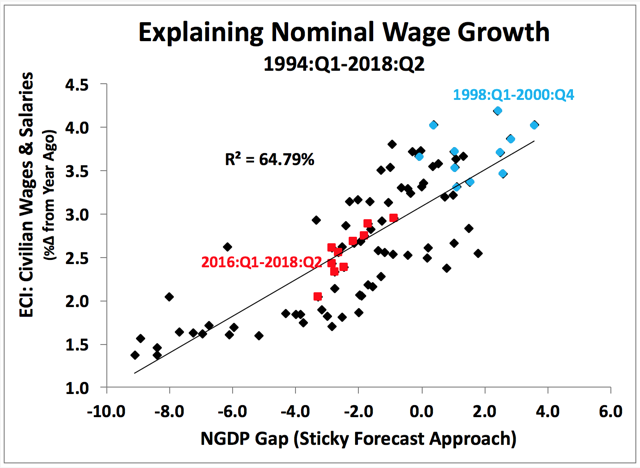 David Beckworth
464 Followers
David Beckworth is an assistant professor of economics at Texas State University. He is the author of Macro and Other Market Musings.
Follow
1 Comment
To ensure this doesn’t happen in the future, please enable Javascript and cookies in your browser.
Is this happening to you frequently? Please report it on our feedback forum.
If you have an ad-blocker enabled you may be blocked from proceeding. Please disable your ad-blocker and refresh.