Published in January 2018, it was aimed at examining the impact of sales of plug-in electric vehicles (PEVs) on electricity consumption, petroleum reduction and battery production.

In this contribution we will concentrate on the second factor only, namely the effect of PEVs on consumption reduction of gasoline.

Explicitly, the Argonne report concludes that between 2010 and 2017 over 750,000 PEVs sold in the United States reduced gasoline consumption by 600 million gallons.

Since I first read the piece I found this last figure to be at odds with any reasonable thinking. To make my point, I went on to ask myself what if all those 750,000 PEVs are battery electric vehicles (BEVs) displacing the same quantity of gasoline vehicles? That being the case, we would expect a larger number (than 600 M gallons) for the reduced gasoline consumption during the period under consideration, right? As shown in Table 1, however, the result of this exercise turned out to be the opposite. What happened? It all indicates that the Argonne study simply overestimated without any valid reason the reduction of fuel consumption by PEVs.

In what follows I first proceed to correct Argonne’s error utilizing essentially the same framework developed by the National Lab and then compare the new figure with my own calculations based on the procedure used in a 2016 piece of my authorship. In addition, I take one step further to estimate the impact of sales of conventional hybrids on gasoline displacement in the United States. Finally, based on data availability, and to discuss any new trends that may have emerged in the data, the analysis is extended to August 2018 in the first case and to June 2018 in the second.

In Table 2 sales of PEVs by EV maker, EV brand, type, and vehicle class for the period of study are presented. Notice the strong upward trend in the last two years after a slight fall in 2015. This is also reflected in the evolution of the market share of PEV sales in total auto sales that in 2017 surpassed the 1% barrier for the first time and in the first eight months of 2018 reached 1.65%. 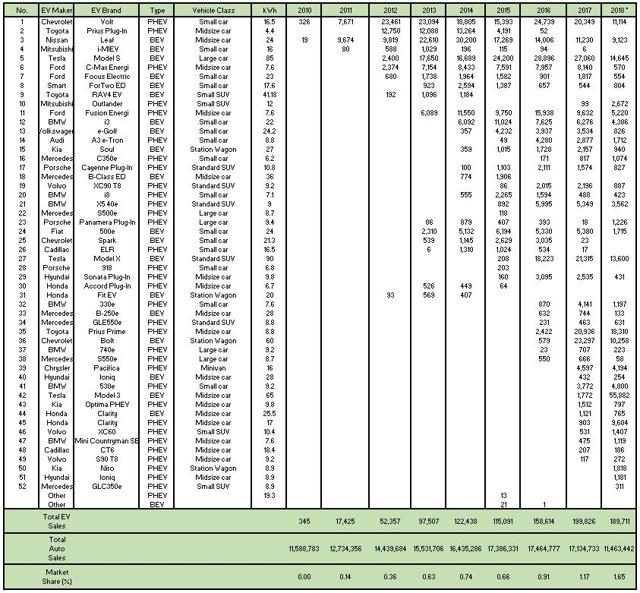 Sources: InsideEvs for PEV sales; FuelEconomy for information on EV Makers, EV Brands, Type, and Vehicle Class, Hybridcars and Marklines for total auto sales for the period 2010-2017, and 2018, respectively.

From here, I continued as follows. After calculating Vehicle Miles Traveled (VMT) for each model by multiplying PEV Sales times the Average Vehicle Mile Traveled Per Year (AVMTPY)[i], I applied a utility factor[ii] (F) to the PHEV VMT figures to account for VMT fueled by electricity and, alternatively, gasoline (1-F). I then proceeded to compute Gasoline Consumption (GC) of Plug-in Hybrid Vehicles (PHEVs) and Battery Electric Vehicles (BEVs) dividing VMT by their corresponding fuel economy figures (in terms of average miles per gallon - MPG)[iii]. The next step was to calculate PEV gasoline consumption assuming all vehicles are powered by gasoline using fuel economy figures for Internal Combustion Engine (ICE) vehicles corresponding to each vehicle class[iv]. Final gasoline consumption reduction numbers were therefore computed subtracting gasoline consumption of the proportion of PHEVs that is fueled by gasoline from the corresponding quantities obtained under the assumption that all PEVs are powered by gasoline[v]. 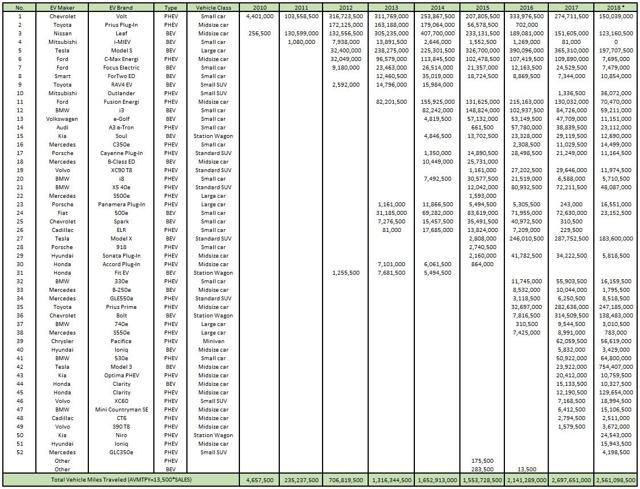 As shown in the Mathematical Appendix, Gasoline Consumption Reduction can be disaggregated into two factors: (1) Gasoline displaced by Fuel Efficiency improvement; and (2) gasolines displaced by all-electric range, where the first describes the technological advances in PHEVs solely related to fuel efficiency in the gasoline mode, and the second exposes the technological leap of both PHEVs and BEVs due to car electrification. An analysis of the relative importance and evolution of each of these factors is beyond the scope of the present study. 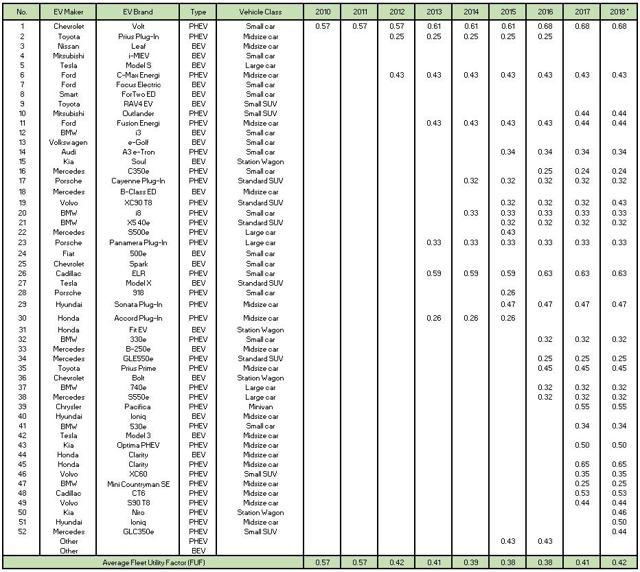 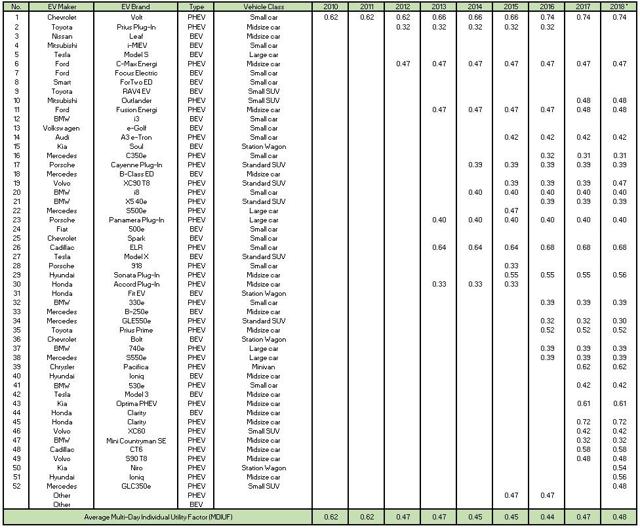 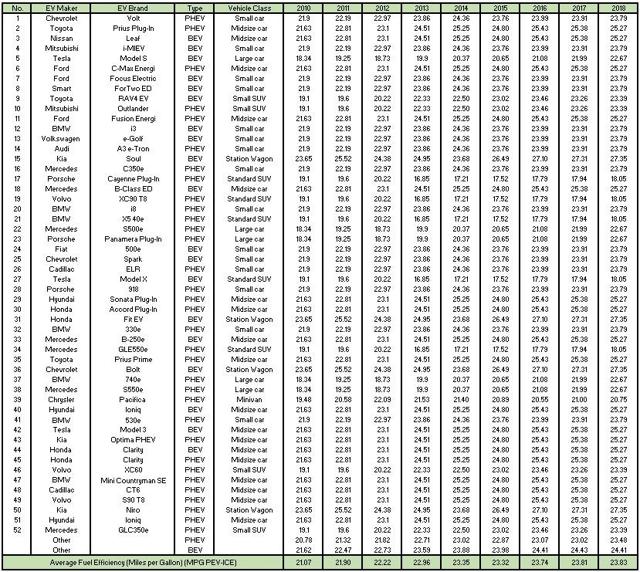 (Assuming all PEVs are powered by gasoline) 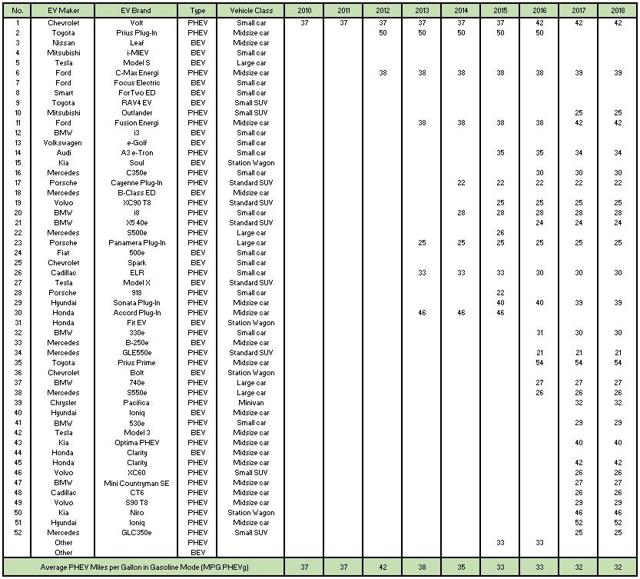 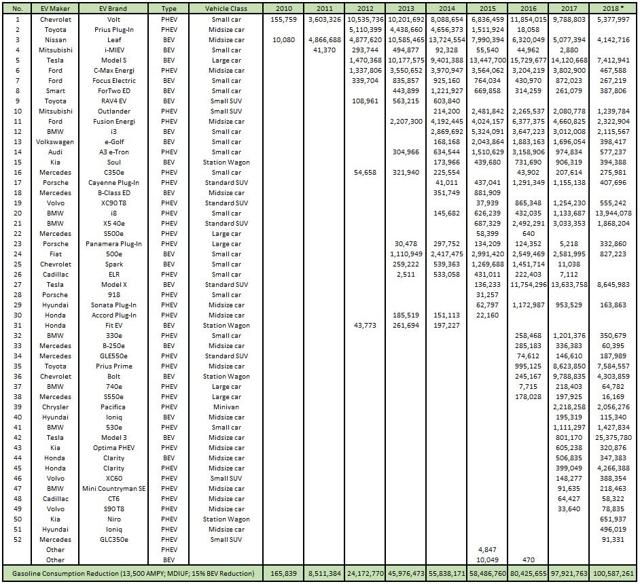 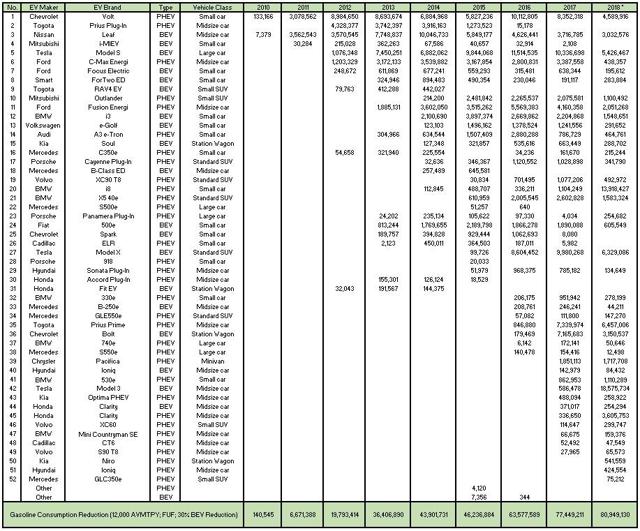 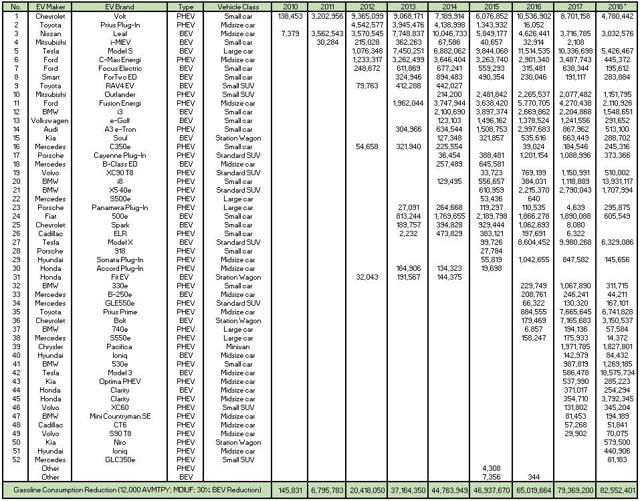 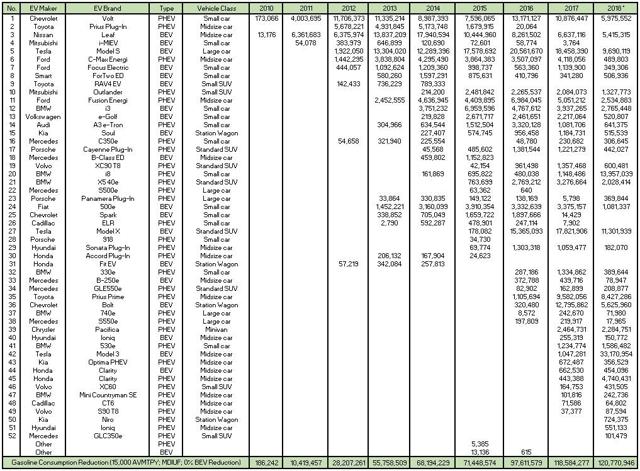 In Table 14, I compare the results for the baseline with the other three scenarios suggested by the Argonne study. In addition, a fifth scenario is included to estimate gasoline consumption reduction utilizing the same AVMTPY as the base scenario, and PHEV average fuel economy figures (i.e. mean MPG values of the gasoline mode and the all-electric mode)[vi], as put forward in a previous contribution of mine[vii]. The main results of this exercise can be summarized as follows. First, Argonne’s calculation of gasoline consumption reduction due to introduction of PEVs into the market was found to be substantially overestimated, regardless of what scenario is taken into consideration, making the National Lab results practically useless. And second, a striking similarity between the results of the base and fifth scenarios validate my previous calculations of displacement of Internal Combustion Engine (ICE) cars by lithium-powered EVs at the world level. In a series of previous articles, which can be found here, here, here, and here, I have elaborated on the causal relationship between oil prices and global economic and financial crises. If lithium is to substitute oil in its most important use (i.e. energy for transportation) in a substantial way, one can only imagine how significant the lightest metal on earth would become in the near future. 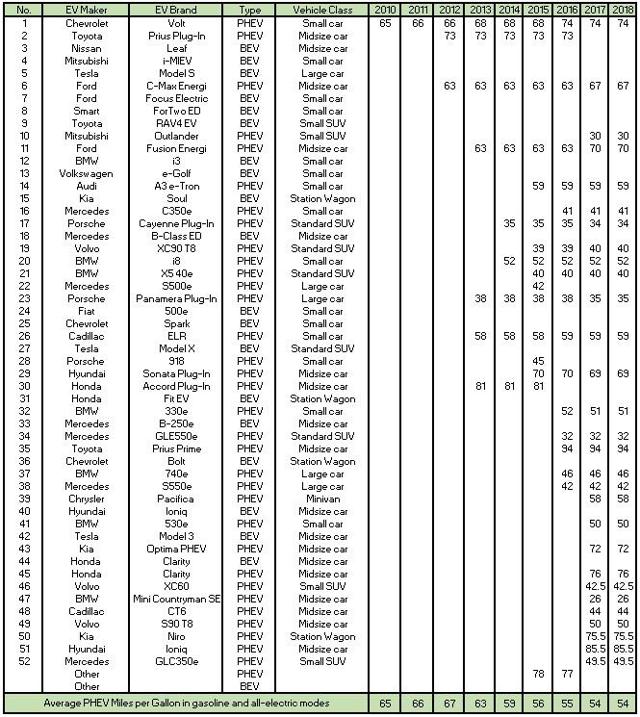 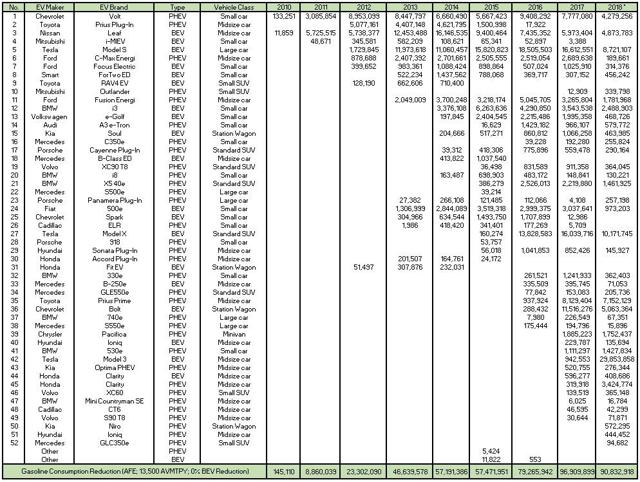 (In Millions of Gallons) 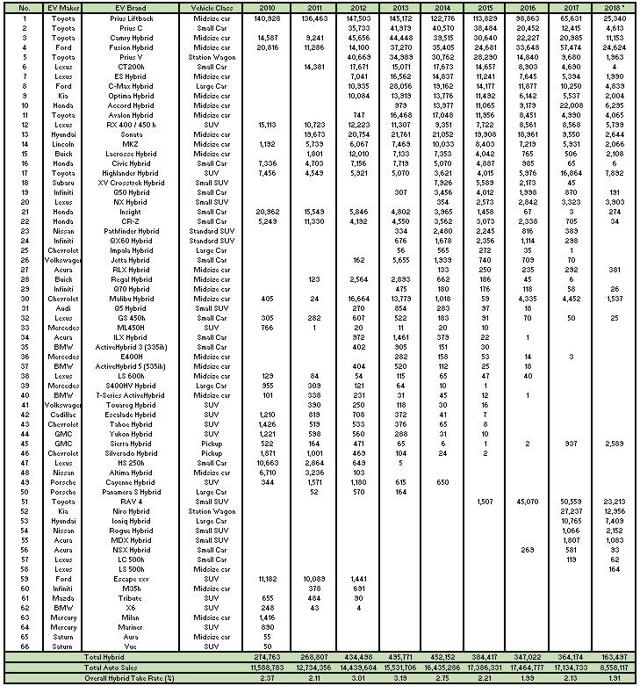 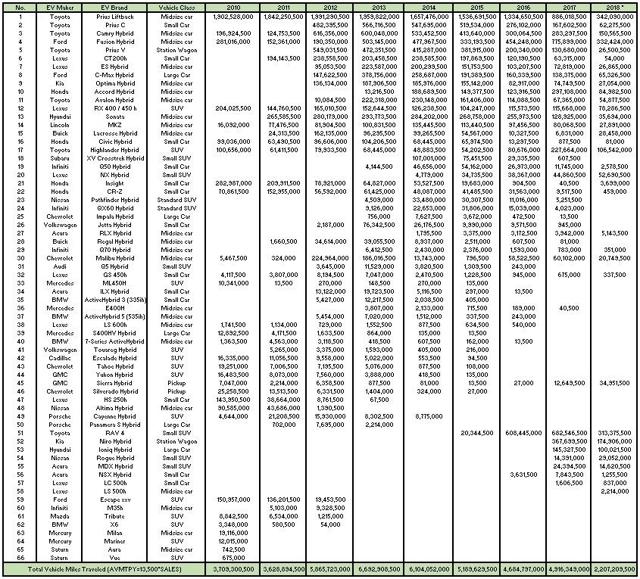 (Assuming all cars are powered by gasoline) 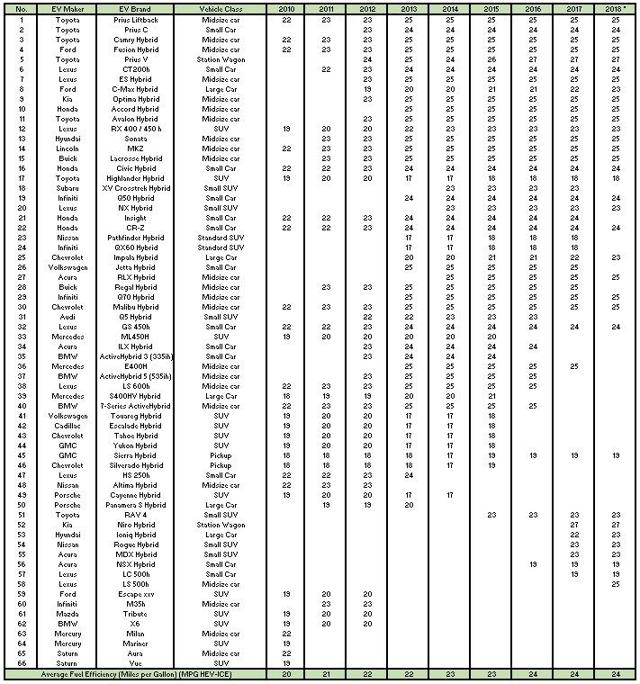 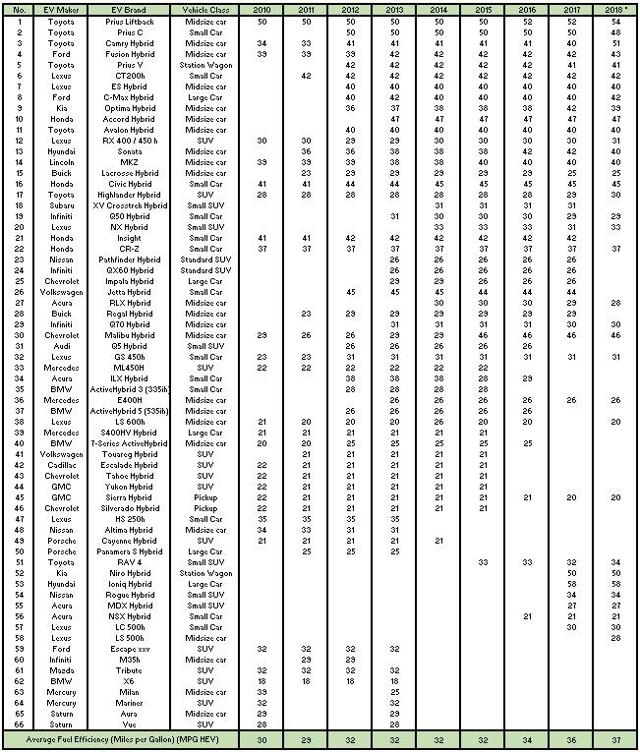 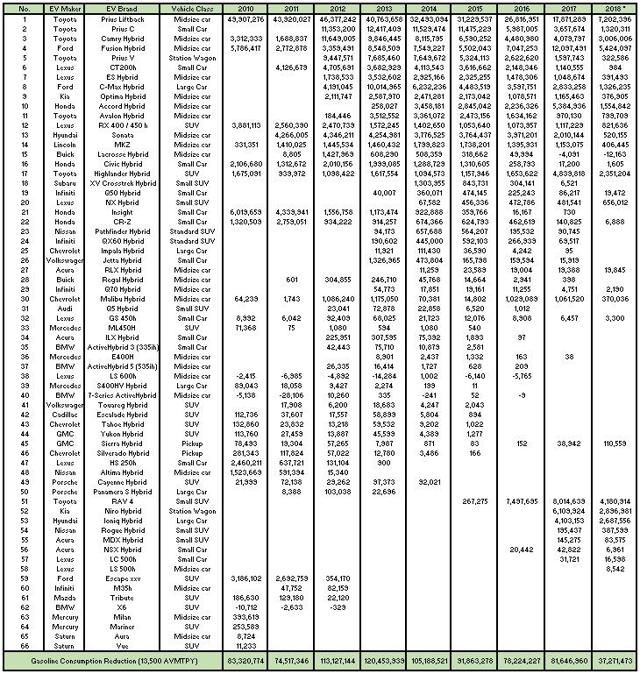 Lastly, in Table 20 we compare the results obtained under the different PEV scenarios with the gasoline consumption reduction due to displacement of ICE cars by HEVs where the dominance of conventional hybrids over plug-ins is most visible in the two periods of analysis[ix]. Nevertheless, this finding must be taken with caution, particularly in light of the closing gap between HEV and PEV sales, a trend I first identified last year in an article on the fundamental role of Tesla and California in the electrification of the U.S. automotive industry, which is likely to accelerate the displacement of oil by lithium in the years ahead.

(In millions of gallons)

The procedure explained in the main text can be further specified in a mathematical format as follows:

Since PHEVs have a gasoline mode and an all-electric mode,

But (F)*VMTPHEV /MPGPHEVe = 0, because in the all-electric mode PHEVs consume no gasoline.

It is also obvious that GCBEV = 0

We needto assume that all PEVs are powered by gasoline

As with PEVs, we need to assume here that all HEVs are powered by gasoline,

MPGPHEVg= PHEV Miles per Gallon in the gasoline mode

MPGPHEVe= PHEV Miles per Gallon in the all-electric mode

[i] In Table 3 we can see VMT for each model for the base scenario of the Argonne study using an AVMTPY = 13,500. Note that this number is a bit higher than that recently estimated by the U.S. Department of Transportation (12,416).

[ii] Following Argonne, two different utility factors to reflect the proportion of PHEV VMT fueled by electricity were utilized, the Fleet Utility Factor (FUF) and the Multi-Day Utility Factor (MDIUF) as provided by the Society of Automotive Engineers (SAE). Since these numbers are not freely available on the web, they were (visually) estimated from Figure 12 of the Argonne study (See Tables 4 and 5).

[iii] Note that since PHEVs have a gasoline mode and an all-electric mode, fuel economy figures correspond to each of these modes. However, gasoline consumption in PHEV all-electric mode and in BEVs is equal to zero. Hence gasoline consumption in PEVs reduces to that related to the proportion of PHEVs that is fueled by gasoline. This is calculated dividing the proportion of PHEV VMT that is fueled by gasoline by PHEV fuel efficiency in the gasoline mode (See Table 6).

[v] In Table 8 the PEV gasoline consumption reduction numbers are shown for Argonne’s base scenario, using an AVMTPY = 13,500; MDIUF, and a 15% reduction of BEVs under the assumption that due to range anxiety drivers tend to drive that percentage less BEVs than PHEVs). Tables 9-11 present the results of the other three scenarios analyzed by the Argonne study utilizing different data for the AVMTPY, utility factor and BEV reduction parameters.

[viii] In Table 15 we can perceive a HEV sales peak in 2013 followed by a general decline until 2016 and a slight improvement in 2017. This trend is clearly related to the behavior of oil prices, a point I first visualized in an article published in 2016. But this doesn’t explain why despite the oil prices went up in the first six months of the year, the overall hybrid take rate actually diminished. I have made a preliminary attempt to look more deeply into this issue in a recent contribution in the context of the fierce competition between the two best-selling HEVs (i.e. Toyota Prius and Ford Fusion) in the U.S. to conclude that acceleration technology and consumers’ preferences of performance over fuel efficiency rather than oil prices may have started to influence HEV sales in a significant manner.

[ix] Taken together PEVs and HEVs, gasoline consumption reduction would amount to 1,110 and 1,258 million of gallons in the respective periods of analysis. These volumes can be converted into 120,367 and 135,319 oil barrels per day (by successively dividing them by 25.47 and 365), which are consistent with my previous results at the world level for the period 2010-2015.

Juan Carlos Zuleta
1.8K Followers
Juan Carlos Zuleta is an economist. He holds a master's degree in Agricultural and Applied Economics from the University of Minnesota and did Ph.D. studies in Economics at the New School for Social Research. Since 1992 he has published a number of articles on the economics of lithium. Due to his contributions to EV World.Com, Industrial Minerals and Seeking Alpha.Com during the period 2008-2009, Juan Carlos was invited to participate as a speaker at both the inaugural Lithium Supply & Markets Conference (LS&M) held in January 2009 in Santiago, Chile as well as the second LS&M Conference held in January 2010 in Las Vegas, USA.
Follow