Blueknight Energy Partners (NASDAQ:BKEP) has a been a disaster for its investors. For a little bit of the back story, we will point out that earlier in the year the company had plans to cut the dividend by approximately 30%. This was discussed Q1 2018 earnings report. As if that was not enough to hit the stock hard, it turned out to be a much worse 45% cut to the distribution. Cut nearly in half! As we have continued to move forward, the stock has faced additional pressure as investor concerns have mounted over declining margins in certain business lines. 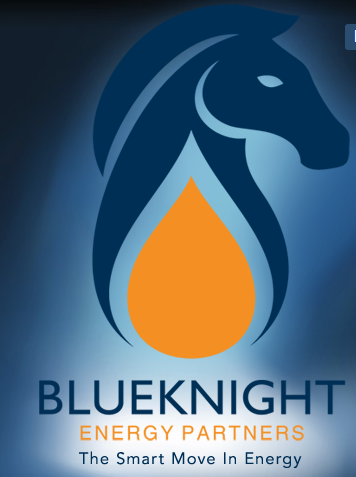 What do we mean by such pressures? Well, while the company's asphalt terminal business continues to perform well, margins have declined for the Cushing oil terminals side of the business. The oil market, which we follow somewhat moderately given our recommendations in other stocks like HollyFrontier (HFC), Exxon (XOM) and Royal Dutch Shell (RDS.A) (RDS.B), has had some issues with contracts and futures pricing. They have entered a state of backwardation, and that hurts the forward prospects for a partnership like Blueknight, at least in some lines of the business, which we discuss a bit more below.

Blueknight Energy Partners has lost more than half of its value in 2018. In or opinion, this is overdone. We also think the stock is set to stabilize here. Even though the chart is ugly, it appears the stock is trying to find solid footing after all of this time. The 5-year, two-year, and 6 month charts are scary, but the latter shows stabilization is occurring.

And the 6 month chart, where we have traced some action:

Here we are seeing just a disgusting series of charts. However, here in the month of September, there appears to be some stabilization on the short-term chart. While risk remains, much of the awful losses and sour news is baked in. Time to turn other investors losses into our gains? Perhaps. We expect improvement in 2019, but think a short-term play can be considered as well.

Note: Those considering holding the partnership longer will enjoy a distribution which is annualized to 12.8% right now.

Despite the immense pressure in the last two few years and the 2018 setbacks, Blueknight Energy Partners looks set to have a better 2019. As stocks start pricing in anticipation of future results, it suggests that there could be some buying pressure in coming weeks, provided there isn't anything crazy happening in oil markets.

We will say plainly that Blueknight Energy Partners business is less dependent on commodity prices than most midstream sector peers, despite concerns over backwardation and contract pricing. Lower prices could help potentially. As we showed in our HollyFrontier piece, we are pretty neutral on oil, expecting it to trade around 70 or slightly lower through 2019. So what does this mean?

Well you see, lower oil prices would may result in lower oil volumes in the pipeline and oil trucking portions of Blueknight's operations. While that is a negative, if that happens, it is likely that this negative outcome would be offset by gains in other areas. A prime example would be the asphalt terminal business. We think this line of business would benefit a touch from a drop in oil prices. This is because lower oil prices could increase demand for the storage and handling of asphalt, which the company generates revenues from. Further, a sudden sharp drop in oil prices (which we do not expect) could be a nice benefit by because the futures curve could move from backwardation to contango. And if oil prices rise, then the pipeline business will benefit from volumes and pricing. This is a well balanced approach, and a reason we like the name, generally speaking.

So where is the company operating? The company has a presence throughout the United States, with many locations for its asphalt terminals. 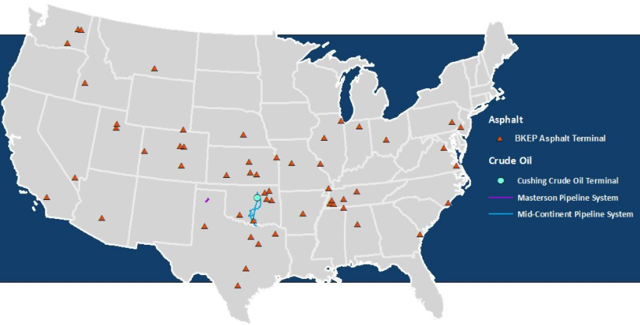 With the locations of the operations in mind, you need to be aware that Blueknight Energy Partners is a midstream player. As shown in the map above, Blueknight has 56 liquid asphalt terminals and storage facilities located in 26 states. You will also note the locations of pipelines in Oklahoma and Texas. According to the operations (linked above), the strategic asset portfolio includes "17.3 million barrels of storage capacity along with 655 miles of pipeline". It also has approximately 65 crude oil transportation vehicles and 50 acres of development property in the Cushing Interchange.

Let us talk more about the operations. The asphalt terminaling services segment accounts for most of Blueknight Energy Partners' cash flow and has been solid. Q3 is the peak seasonal quarter which we are in now. Strong performance continued in Q2 2018, however. In Q2, asphalt terminaling services segment recorded solid quarter-over-quarter growth, achieving a 13% increase in operating margin, excluding depreciation and amortization, versus the same period in 2017.

Blueknight serves the asphalt industry by providing a "combination of leasing some of its asphalt facilities and through the provision of storage and processing services" at its other asphalt and residual fuel oil facilities. At the end of the day, the company generates revenues by charging a fee for the lease of a facility or for services provided as liquid asphalt is terminalled in its facilities. Who is a large customer of Asphalt? Well, governments. Why? They need to fix the roads. Many states have raised their revenue requirements for roads in recent years: 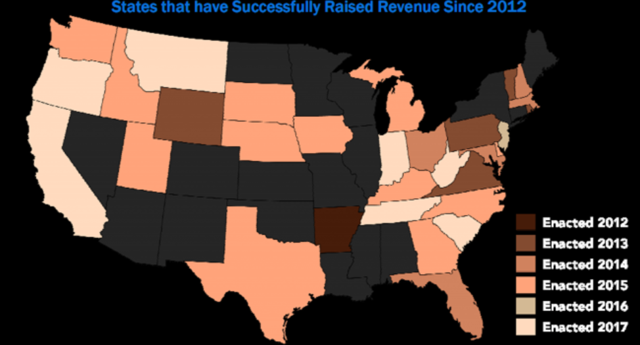 This is important to keep in mind, as state and local governments are major purchasers of asphalt. Further, the dark colored states are those that are yet to enact further revenue requirements for roads. Major states like New York, Connecticut, and Illinois are on this list. Given the deteriorating conditions of infrastructure in the United States, it is likely further spending on roads will be needed in the near future.

Now what about the financial side of the business? With the dividend cut and recent sale of a few asphalt terminals to Ergon, Blueknight Energy Partners has already reduced balance sheet leverage to nearly 4.5X. This ensures continued access to borrow money on attractive terms and keeps a strong credit rating. We expect leverage to be under 4X by the end of 2019, in part due to improving operating conditions and in part due to efforts of management to reduce its leverage. Further, despite what the charts say, operational performance has been better than one would expect given the cuts and units losing 75% of value in the last 5 years 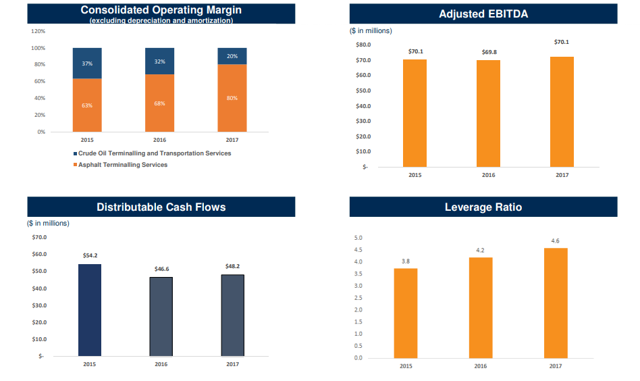 As we mentioned, the leverage issue is being tackled. The distribution coverage looks solid too, following the reduced dividend. In Q2 coverage was only 0.82 times DCF, but fear not. Q2 is a weak seasonal quarter for the asphalt terminal business. The dividend is expected to be more than fully covered on an annual basis by 2019 and in the present Q3.

Of course, we need to be concerned about pricing and futures of the oil markets. In spite of ongoing backwardation, the Cushing Oklahoma oil terminal business should see improvements as we end 2018 and enter 2019. Keep in mind that a 2 million barrel storage contract takes effect on November 1st.

The Cimarron Express pipeline, which we also expect to see improved efficiency in during 2019 thanks to significant investment in 2017-2018, will feed into the Cushing storage terminals and create additional demand for storage starting in mid-2019. In addition the Eagle pipeline has been rebuilt and returned to service and should have an impact on Q3 as it will add approximately 20,000 barrels per day to the Oklahoma pipeline capacity. Operationally, the entire situation at Blueknight looks attractive.

We anticipate oil pricing to be around $70 or lower for WTI in 2019, and this would be fine from an operational standpoint. With the company getting its fiscal house in order, while the distribution is looking secure, other investors' losses can be our gains. Income investors are being well paid to wait for the turnaround, but our short-term traders could consider a position for a bounce in anticipation of a better 2019

Our half-off annual discount for new members is ending: Join a community of day traders and value hunters

Our 53% annual discount period ends soon. Price doubles after that. Get our highest conviction rapid-return trade ideas for ~$1 a day. Be a winner.

What we do for you:

Find beaten-down stocks and profit from their reversals.

Disclosure: I/we have no positions in any stocks mentioned, but may initiate a long position in BKEP over the next 72 hours. I wrote this article myself, and it expresses my own opinions. I am not receiving compensation for it (other than from Seeking Alpha). I have no business relationship with any company whose stock is mentioned in this article.