Many investors buy REITs when interest rates are declining and vice versa.

However, the use of the historical average 'spread' between the REIT dividend yield and the 10-yr Treasury yield as the demarcation line for expensive or inexpensive is flawed.

Except in extreme cases, being above or below the spread was an insignificant predictor of future total returns.

With the spread currently below the historical average for the first time since 2014, our assessment of REIT fundamentals indicates that REITs are still attractively priced.

As such, we believe the spread could remain below the historical average for an extended period.

Originally referenced in a Federal Reserve paper from 1997, the 'Fed Model' states that the earnings yield of equities should track the 10-year Treasury yield over time. 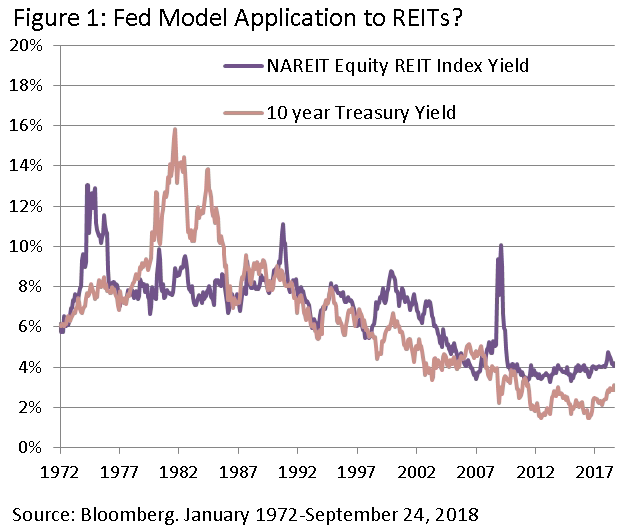 From 1978 to June 2018, the monthly correlation of the FNRE yield and the 10-year Treasury yield was 77%, indicating a somewhat strong relationship. However, there are quite a few periods where the relationship breaks down, and even somewhere they move in the opposite direction! Recently, the FNRE yield was highly correlated with the 10-year Treasury yield from 2012-2017, but the correlation actually turned negative in 2011 and in 2018, among other periods.

As of September 24, 2018, this spread had declined from more than 200 bps earlier in the year to 112 bps, the lowest since 2014. Thus, subscribers to the Fed Model would also conclude that REITs are above fair value, and most certainly not at the "bargain prices" mentioned in the March 2018 REIT Outlook. So, should REIT investors be worried about future performance?

Does the Fed Model Work?

In 2015, the correlation between the FNRE total return and the US 10-year Treasury yield was -68% using daily data, meaning higher 10-year Treasury yields resulted in negative REIT performance. In comparison, the Barclays Aggregate Bond Index (Bloomberg: LBUSTRUU) and the S&P 500 had correlations of -90% and +22% with the 10-year Treasury yield, respectively. As a result of many years similar to 2015, REITs have been placed in the 'yield alternative' category, trading in similar patterns to fixed income and thus have been subject to speculation of price declines when long-term interest rates are rising (or vice versa).

The mere observation of the spread versus a historical average is not a useful tool unless it helps to predict future performance. Figure 2 shows the forward two-year total returns of the FNRE versus the bps above or below the historical average spread. With a correlation over 60% and an r-squared of almost 40%, the relationship appears to be significant. The chart shows that more periods where the spread was positive produced positive total returns, and vice versa. 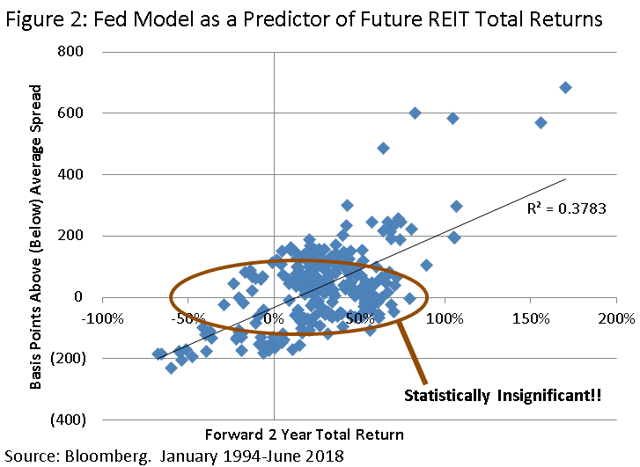 The expectation that a spread should return to some historical average may work for fixed income, but REITs are similar to equities in that earnings and dividends can grow (or shrink). Thus, the REIT dividend yield spread can function similar to a price to earnings ratio (or P/E). Intuitively, the P/E ratio should be higher when earnings are growing faster and vice versa. Similarly, the yield spread should be lower when dividends are growing faster, and higher if the opposite is happening. Some of the data we can observe to determine the direction of dividend growth would be payout ratio, cash flow growth, availability of capital, and capital needs.

REITs have been able to grow dividends well beyond the rate of inflation historically. However, dividend growth has varied in the cycle based on several factors, but principally from the growth in cash flow. As such, the correlation between dividend growth and cash flow growth, as measured by Funds From Operations (or FFO), from March 2000 to June 2018 is 50%. That was the strongest relationship that we were able to find between the spread and fundamentals. We would've expected the relationship to be even stronger, but a dramatic change in dividend policy over the past 20 years has dampened the correlation.

Based upon our observation of REITs since 1972, the 'ideal' payout ratio has changed from "whatever is needed to attract yield investors" to a more sophisticated model. As REITs gained acceptance from institutions into the late 1990s and 2000s, preferences shifted to a lower risk profile, which included a reduction in leverage and payout ratios. The new ideal payout ratio that enhances predictability of future growth of dividends, and free cash flow that provides an additional capital source.

One of the oft-stated criticisms of REITs from generalist investors is that they must constantly tap the equity market. Unless there are dispositions to match future capital needs, the ability to use free cash flow after dividend payments can be a significant help to meet funding goals without having to tap the equity markets or increase leverage. While the correlation between 'net acquisitions' by REITs and dividend growth is low at only +31% from March 2000 to June 2018, we believe that it also can be attributed to the decline in payout ratios. Now that REIT dividends are getting closer to taxable net income, payout ratios have likely reached a floor. Going forward, we anticipate an environment with low net acquisitions to lead to higher dividend growth, holding all other variables constant.

The correlations between the dividend yield spread and the above mentioned economic measures are surprisingly high. The most powerful predictor of the yield spread has been the 'Effective Federal Funds Rate', which is managed by the Federal Reserve via monetary policy. With a correlation of -80% from 1978 to June 2018, this indicates that Fed tightening or easing has had the opposite effect on the spread. Therefore, while tightening may have had an effect on the 10-year Treasury yield (93% correlation over the same period), the REIT yield did not adjust in-line with the 10-year Treasury yield, causing the spread to compress.

Accordingly, the correlation between the dividend yield spread and the University of Michigan one year inflation expectation index has been -53% since 1978. This is good news for those looking at REITs as an inflation hedge. Practically speaking, REIT income and property values should increase as a result of higher costs, which should drive dividend growth and thus a lower spread.

One issue with something as simplistic as dividend yield spreads is that dividends do not have to be directly related to earnings power. REITs are required to payout at least 90% of taxable net income as dividends to satisfy IRS requirements, but equity REITs have the option of a dividend policy based upon cash flow that typically is considerably higher than net income.

For instance, a REIT may elect to pay out 100% of cash flow as dividends in an attempt to attract yield-oriented investors or simply because it does not have any other use for the free cash flow. Consequently, dividend growth in the future could be lower without the excess cash flow. In contrast, another REIT may decide to pay out only 65% of cash flow (but at least 90% of taxable net income) as dividends due to a variety of capital needs such as debt repayment or to fund an acquisition. The lower payout ratio REIT provides 'retained earnings' and will likely contribute to higher future dividend growth. This is the most misunderstood aspect of equity REITs, but it is one of the most positive attributes utilized by REITs to generate a growing dividend stream. 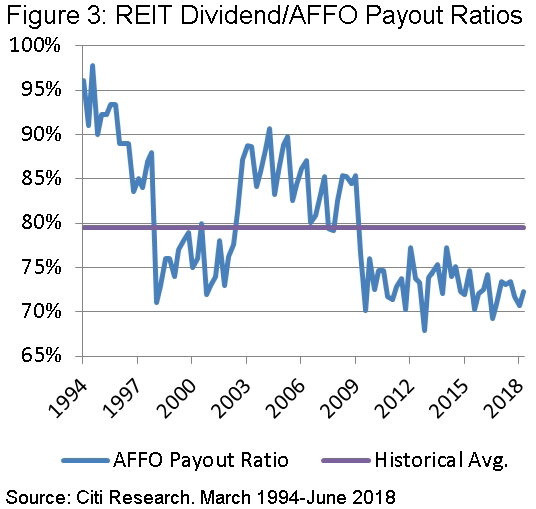 Therefore, because dividend yield can be manipulated, the historical average spread makes comparisons between periods difficult. In fact, when looking back at periods in the past when the dividend yield spread was higher, REITs employed much higher payout ratios. As shown in Figure 3, the dividend/AFFO (or Adjusted Funds from Operations) payout ratio has averaged 80% from the start of the modern REIT era in 1994 to June 2018, and averaged 90% from 1994 to 1997. Those high payout ratios contrast to the 72% payout ratio as of June 30, 2018.

Not a Total Return Predictor

The dividend yield spread has not been a consistent predictor of future REIT total returns, except in extreme scenarios. We also believe that predicting future REIT total returns based on changes in the 10-year Treasury yield can lead investors astray due to the ability for the spread to change. In fact, the 10-year Treasury yield had a negative 84% correlation with the dividend yield spread from 1978 to June 2018, indicating that the spread compresses when long-term interest rates are rising.

Furthermore, predicting near-term REIT total returns based on a reversion to the historical average yield spread is flawed due to the ability to manipulate payout ratios. In fact, when we adjust the dividend yields to a constant payout ratio, the correlation between the yield spread with the 10-year Treasury yield changes from -36% to -60% from 1994 to June 2018, indicating a much stronger relationship. In other words, if investors would like to use the yield spread as a predictor of REIT total returns, then they should be using the adjusted historical average of 76 bps instead of 127 bps. In this case, REITs would still be undervalued by 9.5%!

We would warn those using the Fed Model that this could be an extended period of below average yield spreads. Dividend payout ratios are near all-time lows, the capital markets are wide open, REITs are making very few net acquisitions, and cash flow is growing at a mid-single digit pace. While the other indicators may be predicting a rise in the 10-year US Treasury yield, it is our confidence in the REIT fundamentals that allows us to remain positive on near-term REIT performance. And, per our research above, the spread has historically contracted when the economy is growing and inflation is increasing.

Follow Chilton REIT Team and get email alerts
+
Add a comment
Disagree with this article? Submit your own.
To report a factual error in this article, click here.
Your feedback matters to us!