Tesla (NASDAQ:TSLA) released its much anticipated deliveries report for Q3 on the 2nd. Model 3 production at 53,239 was in line with guidance. Deliveries of Model 3 at 55,840 were slightly below street expectations. In-transit vehicles decreased by about 3,000 units which indicates the inventory has been drawn down slightly counter to our expectations.

Model S and X deliveries came in at 26,903. While this is stronger than expectations, we note that various promotions along with fleet sales are the likely reason for the strength.

Setting aside the numbers themselves, the press release stands out for a few things: 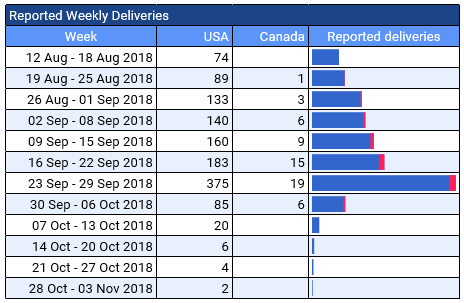 With over 8,000 cars in transit, one would think the deliveries during the first week of October would be healthy, but there is no evidence of that in the image above. We suspect Tesla is categorizing inventory as in-transit or resorting to some other shenanigan to boost the in-transit number. To put it mildly, the in-transit number is highly dubious.

Setting aside the in-transit numbers, what do the Q3 delivery numbers mean to Tesla?

The higher than expected Model S and Model X sales, and the massive amount of money that Tesla is collecting from customers prior to delivering Model 3 cars is a big boost to Tesla in terms of profitability and cash flow.

The number of levers that Tesla has at its disposal to create artificial boost to profitability or cash flow in any given quarter is high. Levers include: ZEV credits, AP revenue recognition, expense deferral, promotions with no upfront cost but significant future expenses (such as free Supercharger credits and low interest loans), and categorization of expenses (whistleblower suit by ex-employee Marty Trip alleges that Tesla capitalized scrap).

Due to these levers, it is possible that Tesla may get close to breakeven. However, our model suggests that a loss north of $100M is likely. Even if Tesla can be made to look profitable in Q3, there will be considerable investor doubt as to whether it can sustain in the future quarters.

In terms of cash flow, it is very difficult to predict how Tesla will do given the opacity into the customer deposit line item (especially with its new practice of collecting money for the car prior to even scheduling delivery)

Demand Is A Big Problem

Regardless of how Q3 financials pan out, the biggest problem that besets Tesla today is demand (or the lack thereof).

As discussed in the previous note, the situation with the LR model demand has gotten so bad that Tesla has now essentially stopped producing this version (image below from Model 3 public tracker). Note the paucity of blue dots that represent the LR version. 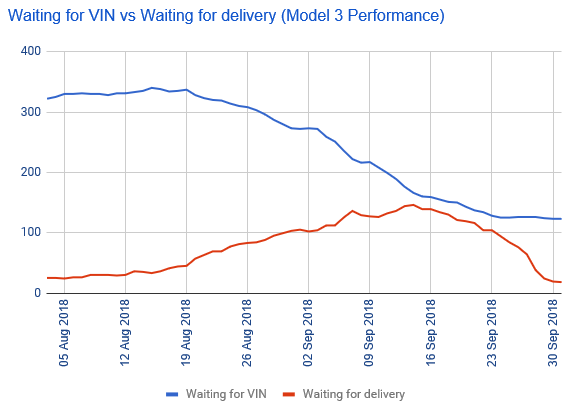 This is bad news for Tesla as the Model 3 Performance version is the only Model 3 with decent gross margins. Note that the reservation queue for this highest margin version is all but gone.

On the upside, Tesla has recently drummed up additional sales for this model by offering free lifetime Supercharging. Thanks to this long-term loss-making promotion, Tesla has been able to drum up “P” version demand by about thousand cars. We predict that the reservation queue, including this new demand, will be essentially satisfied during the first or second week of October. Going into November, there is very little demand for the only Model 3 with respectable margins.

Considering the big delivery push and in-transit numbers, we also predict that the reservation demand for the AWD version will be satisfied in October. 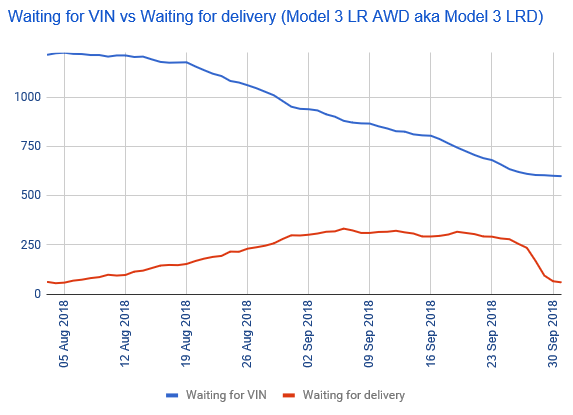 It is then no wonder that Tesla has very little scheduled and is delivering very little in October (see first image in the article). It is also little wonder that there are multitudes of car carriers sitting empty around Tesla Fremont facilities (source: Flash Jourdan from Twitter).

Barring initiation of sales to Europe in Q4, we expect Model 3 AWD sales to collapse by late October. By November, we expect Model 3 run rate, including all available models, to be around 2,000 to 2,500 cars per week. This is a disaster for Tesla as this is less than half the rated production and well below the breakeven point communicated by CEO Elon Musk.

Cash Flow Is Starting To Become A Critical Issue

There is no doubt that Q3 was engineered to be a relatively strong cash flow quarter with big push in delivering high margin “P” and “AWD” version sales. But, due to demand and mix issues, cash flow beyond October is bleak barring a capital raise.

As can be seen from the image above, the company has several loan maturities in the Q3 2018 to Q1 2019 time frame that cause considerable cash burden:

Furthermore, there is a $566M Convert due 11/2019. The image below shows debt maturities over the next few years. 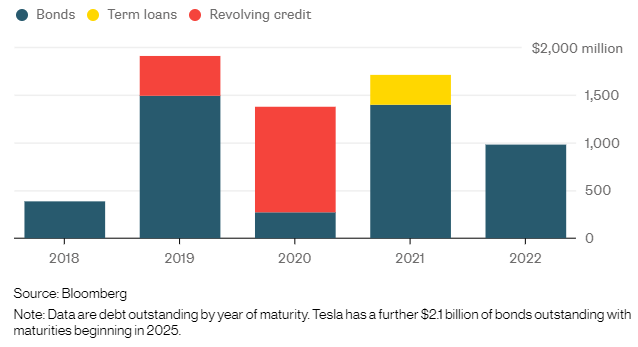 The problem for Tesla is that it has a billion of dollars of debt or more coming due every year without even accounting for additional capex needs for new ventures such as Model Y, Truck, or Roadster. The company has no prospects of addressing the current debt let alone new debt without substantial cash flow.

If the company cannot generate significant, if any, positive cash flow in this quarter with disproportionately large amount of high margin “P” version of Model 3s, and benign competitive environment, then it will never be able to generate the required cash flow with less favorable Model 3 mix and competition from many new BEVs in the market.

The Q3 delivery report is tame and lacks the bluster we have seen in recent quarters. While the hints are subtle, there is little doubt that Tesla is laying the groundwork for a future guidance reduction. The narrative fits with the lack of demand signs that are now becoming increasingly obvious.

Based on all available information to date, here are some predictions:

What is worse is that the demand challenges of Model S and Model X pale in comparison to Model 3 problems. Tesla MUST start dramatically reducing Model 3 production or shut it down altogether for several weeks in Q4.

Because of the combination of factors, we find another massive layoff in Q4 likely. We expect a company-wide reorganization and at least 10% reduction in labor in the coming weeks.

We expect that the Q3 call has the potential to get very ugly. Cash flow issues and debt payment schedule will start dominating investor questions starting Q3 and in subsequent quarters unless there is a capital raise.

Subscribers to Beyond The Hype have access to all the linked articles that may otherwise be inaccessible. For timely, cutting-edge insights, analysis and investing ideas of solar, battery, autonomous vehicles, and other emerging technology stocks, check out Beyond the Hype. This Marketplace service gives you early access to my best investing ideas, along with event driven and arbitrage opportunities when they are most edgy and actionable. If you want expert advice on seeing through the hype, separating fact from fiction, avoiding investing landmines in emerging technologies, and an opportunity to participate in a vibrant and intellectually stimulating real-time chat room with other high-caliber, like-minded investors, consider subscribing to Beyond the Hype today. Subscribers also get access to all past articles.

EnerTuition
10.05K Followers
Author of Beyond The Hype
Where emerging technology and truth converge.