The gold and silver futures markets got even more unbalanced last week, with speculators (who are usually wrong at the extremes) going as short as they've ever been and commercials going even more long. 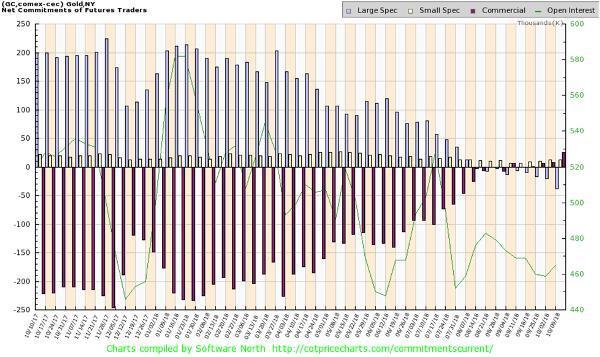 These are historically huge imbalances that - if the action in the paper markets still has predictive value - point to a gold short squeeze in which the speculators who are now betting that precious metals will fall are forced to cover those positions by buying, in the process sending the price up dramatically.

On Thursday we got a sense of what that might look like. Stock markets around the world sold off, which sent capital scurrying for cover. Some of that capital flowed into gold, which chased futures speculators out of some of their shorts. The result was a nice pop in gold: 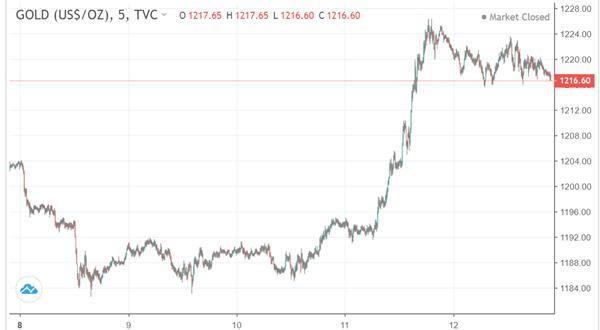 But this barely dented speculator short positions, as we'll discover next Friday when the COT report covering Thursday's action is released. So the real gold short squeeze is still to come.

The other interesting thing about last week was that stocks, bonds and cryptos all fell while gold and silver were rising.

These aren't especially notable moves, and can be reversed out in a single big "risk-on" trading day. But again, they're a taste of what's coming when it finally dawns on investors that every major asset but gold is overvalued and therefore prone to correct if not crash. Even instruments previously thought to be safe havens like government bonds and cryptocurrencies have become bubbles destined to pop.

Gold is the only thing that hasn't been bid up to bubble territory in the past few years, which makes it cheap and therefore relatively safe. Combine this undervaluation with the even more important fact that precious metals have historically been the safe haven in times of financial and geopolitical stress, and there's a real possibility of global capital not just trickling but pouring into this tiny market. That gold short squeeze will be one for the history books.

John Rubino
2.73K Followers
John Rubino manages the financial website DollarCollapse.com. He is the co-author, with GoldMoney’s James Turk, of The Money Bubble (DollarCollapse Press, 2014) and The Collapse of the Dollar and How to Profit From It (Doubleday, 2007), and author of Clean Money: Picking Winners in the Green-Tech Boom (Wiley, 2008), How to Profit from the Coming Real Estate Bust (Rodale, 2003) and Main Street, Not Wall Street (Morrow, 1998). After earning a Finance MBA from New York University, he spent the 1980s on Wall Street, as a money market trader, equity analyst and junk bond analyst. During the 1990s he was a featured columnist with TheStreet.com and a frequent contributor to Individual Investor, Online Investor, and Consumers Digest, among many other publications. He currently writes for CFA Magazine.
Follow
1 Comment
To ensure this doesn’t happen in the future, please enable Javascript and cookies in your browser.
Is this happening to you frequently? Please report it on our feedback forum.
If you have an ad-blocker enabled you may be blocked from proceeding. Please disable your ad-blocker and refresh.