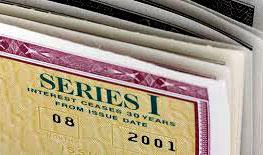 Investors in U.S. Series I Savings Bonds have entered the last 'limbo period' of 2018 and it's time to make a decision: Are they going to buy I Bonds this year, or not?

I Bonds are a unique investment -- very safe and very conservative, and yet are followed with passion by some fairly wealthy investors. Why? Because they offer the opportunity to push tax-deferred, inflation-adjusted money into the future, with zero risk.

A quick primer on I Bonds

But there is one sort-of-nagging problem with I Bonds: The U.S. Treasury limits purchases to $10,000 per person per year. Purchases must be made electronically through TreasuryDirect, but there is also the possibility of getting $5,000 a year in paper I Bonds in lieu of a federal tax refund.

This purchase limit vexes I Bond investors, who are intent on building a large cache of super-safe, tax-deferred, inflation-protected money for use in the future. So the question arises: When is the right time to buy?

(Disclosure: I bought my I Bond allocation back in May after the fixed rate rose to 0.3%. So did a lot of investors, but if you didn't ... )

Each year, there are two 2-week periods - the weeks before May 1 and November 1 - where the new variable rate has been set and I Bond investors can compare their possible returns and decide: Buy before or after the rate reset?

We are in one of those limbo periods right now, because the September inflation report issued on October 14 set the new I Bond variable rate at 2.32%, up slightly from the current 2.22%. Here is how those numbers were calculated:

So for I Bond purchases made after November 1, the variable rate will be slightly higher. Obviously, anyone who has waited until now to purchase I Bonds will want to wait until November 1, right? Yes, but ...

The one risk in waiting is that the Treasury could decide to drop the I Bond's fixed rate below the current 0.3%. I Bond investors almost always will prefer a higher fixed rate over a higher variable rate, because the fixed rate sticks with the I Bond until it matures or is sold.

Think of it this way: The variable rate matches inflation. The fixed rate is the I Bond's 'real return above inflation.' Always go with the higher fixed rate.

And now the key question: What will the Treasury do with the fixed rate in the November 1 reset?

Forecasting the I Bond's fixed rate

The U.S. Treasury has never detailed how it sets the I Bond's fixed rate, and it has occasionally made some very strange decisions. So my forecast should be read in that context: I am guessing. Nevertheless, the data justify an increase in the I Bond fixed rate on November 1.

In my forecast, I track the spread between the I Bond fixed rate and the real yield of 5- and 10-year Treasury Inflation-Protected Securities. In the past, I have found that the 10-year spread seems more relevant, especially when the 5-year yield dipped well below zero. But now, with the 5- and 10-year TIPS yielding at very close levels, both are relevant. Here are the numbers, with the November 1 possibilities presented at the top: 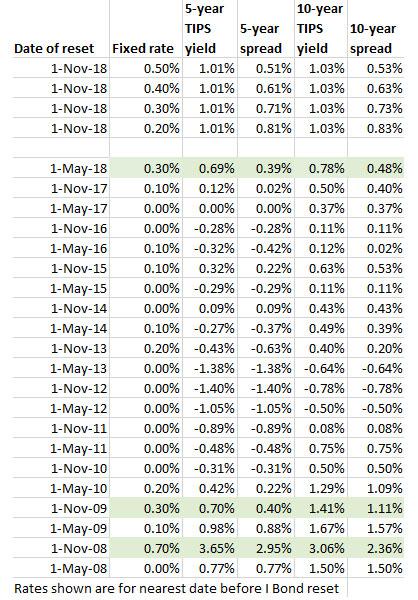 Now take a look at the 5- and 10-year yield spreads, which indicate very strongly that the Treasury will not lower the fixed rate to 0.2% on November 1. That would push the 5-year spread out to 0.81%, massively higher than any reset going back to November 2009 (ancient history). The 10-year spread would be 0.83%, also much higher than previous resets.

So, let's rule out a reset to 0.2%. It's not going to happen. (Ahem ... the Treasury is unpredictable. Cough. Cough.) If I am right, there is zero risk for I Bond investors to wait until the November 1 rate reset to make a purchase, capturing a higher variable rate and possibly a higher fixed rate.

My one caution is that the Treasury has a tendency to hold to the status quo. If that happens, the fixed rate will remain at 0.3%, which isn't really justified by the data.

Conclusion: The fixed rate should rise, at least to 0.4%. Are you listening, Treasury?

A higher fixed rate benefits us all

Even if you have already purchased your I Bond allocation for 2018, this next rate reset with carry through to April 2019, so you will be able to purchase I Bonds next year with the potentially higher fixed rate.

The next 'limbo period' will begin April 10, 2019, at 8:30 a.m. EDT, when the Bureau of Labor Statistics releases the March inflation report, setting in stone the I Bond's next variable rate reset on May 1. So if the fixed rate rises, you could just buy in January and forget it, or wait until later in the year, or split your purchase into two or more parts.

Another thing to consider: If you are holding I Bonds with fixed rates of zero, you could consider selling those and reinvesting the money in an I Bond with a higher fixed rate. Realize two things, though: 1) you'll owe federal income taxes on the accrued interest, and 2) a repurchase still can't exceed your $10,000 a year limit, so your I Bond holdings will stay flat if you are selling $10,000 to buy $10,000.

I'll be taking another look at I Bond buying strategies early next year.