It is commonly believed that you cannot have more reward without taking on more risk. I take a different view. You certainly can have more reward by taking on less risk, simply by switching from highly risky investments to more dependable ones. By evaluating every investment from as many angles as possible, you both reduce your risk and increase your reward.

I. The difficulty of quantifying risk

There is no general agreement on how to quantify risk. The capital asset pricing model (CAPM) defines risk as beta, the slope of the linear regression between the price of an asset and its benchmark. Another commonly used measure is the variability of returns, which is the basis for the Sharpe ratio. The most straightforward measure, and the most intuitive one from the man-on-the-street standpoint, is the probability of a permanent financial loss. Downside variability is another measurement of risk, and this basically combines the last two measures.

I mean to show that no matter which of these four measures you use, taking on less risk in your investments can increase your reward.

It has been well known since the 1970s that, in any given asset class, alpha, or reward, is actually inversely correlated to beta, and that low-beta strategies outperform high-beta strategies. I have shown here, mathematically, that this has to be so because of the way the two terms are defined. By decreasing your beta, or systematic risk, you’re likely to increase your reward.

This definition is historically based on the idea that risk is a failure to meet expectations, and standard deviation is a mathematical shorthand for the probability of this failure.

If you switch from an all-cash portfolio, which has no variability whatsoever, to an all-equity portfolio, you will be increasing your risk and also increasing your reward. But if you switch from an all-cryptocurrency portfolio, which suffers from extreme variability, to an all-equity portfolio, it’s quite probable that you’ll also increase your reward. In fact, there are all sorts of wildly unsafe investments whose returns sport enormous standard deviations. If you’re invested in one of these, you can certainly increase your reward while diminishing your risk.

IV. Risk as the probability of permanent loss of capital

Let’s look only at the stock market for a moment. The riskiest stocks in terms of a permanent loss of capital are the stocks most likely to go bankrupt. Edward Altman quantified this risk back in 1967 using what he called the Z-Score, a combination of five factors: working capital to total assets, retained earnings to total assets, earnings before interest and tax to total assets, sales to total assets, and market value of equity to total liabilities. If you had invested in all the stocks in the Russell 3000 with Z-Scores below 1.8 (the threshold for significant bankruptcy risk; there are about 600 of these stocks), rebalancing every quarter since 1999, with no slippage, you would have seriously underperformed the market (I tested this using Portfolio123). If you had excluded these stocks, thus lowering your risk, your return would have gone up significantly.

The same lesson can be applied to other types of investments. As I’ve shown in another article, if you have a fixed amount of money and you’re withdrawing some of it every month, you’re much more likely to go broke if you keep it in cash than if you invest it in equities. Cash, in this case, is far riskier (by this definition—the probability of a permanent loss) than equities. It’s no coincidence that cash’s return is negative. By putting your money to work, you’re both decreasing risk and increasing returns.

If you were to assume that increasing your risk would mean increasing your return, you would wind up with a logical contradiction, because if a higher return were assured, it wouldn’t be risky. Nobody, of course, actually assumes that—every investor knows that some risks are worth taking and others definitely are not. Yet the prevalent belief remains: increased risk is somehow the price you pay for higher earnings. If you think about it, that’s a logically impossible proposition.

VII. The Paradox of Risk-Adjusted Returns

If we assume, as most people do, that higher risk is justified by the possibility of higher returns, we then want to adjust those higher returns to take risk into account. But this leads us to the paradox of risk-adjusted returns, which I discussed at length in my very first Seeking Alpha article. I’ll quote from it here:

We've seen that financial risk can be defined in two very different ways. If we define it as the failure to meet expectations, the essential component of risk is unpredictability. Logically, then, no measure of risk will exhibit any persistence, since persistence is the opposite of unpredictability. Therefore, a measurement of ex-post risk will have no correlation with ex-ante risk. On the other hand, if we define risk as the permanent loss of capital, then there's no logical way to adjust returns for risk, since positive returns are the sole guarantee against the permanent loss of capital, and negative returns are the sole guarantee of the permanent loss of capital. The concept of risk-adjusted returns is a chimera.

VIII. Why take on risk?

One of the prime justifications for the supposed correlation between risk and reward is a simple question: why would people invest in risky assets if there were no corresponding reward? There is a purely psychological answer: because risk-taking has its own psychological rewards, entirely apart from economic ones. Why else would anyone play Russian roulette, or go base jumping or free solo climbing? The entire Red Bull aesthetic is built around the psychological rewards of risk-taking. So, one could argue, is cryptocurrency trading.

Rejecting the risk-reward correlation leaves us with several possibilities. First, that there is simply no financial relationship between risk and reward. Second, that there is an inverse relationship between risk and reward—in other words, that the riskier the investment, the less reward there will be. Third, that risk is absolutely unquantifiable, that no definition of risk can really make sense, and that therefore the entire topic should be discarded since you can’t compare an unquantifiable thing to a quantifiable thing (reward).

None of these alternatives are very satisfactory for the simple reason that if any of them were true, very few people would invest in stocks, or anything else risky, for that matter. And lots of people do invest in stocks, taking all sorts of risks, and make money doing so.

But there is a fourth alternative.

I want to propose that risk and reward enjoy a non-linear correlation with the following characteristics. With no risk at all, there is no reward. As risk increases, reward increases, to a certain point. After that point is reached, as risk increases further, reward decreases.

I’ll illustrate this with a scatter-plot chart. I have looked up the percentage deviation of weekly returns of all of the ETFs in Portfolio123's database five years ago, along with their annualized returns over the past five years (this includes ETFs that have since been removed from the marketplace, so it does not suffer from survivorship bias). 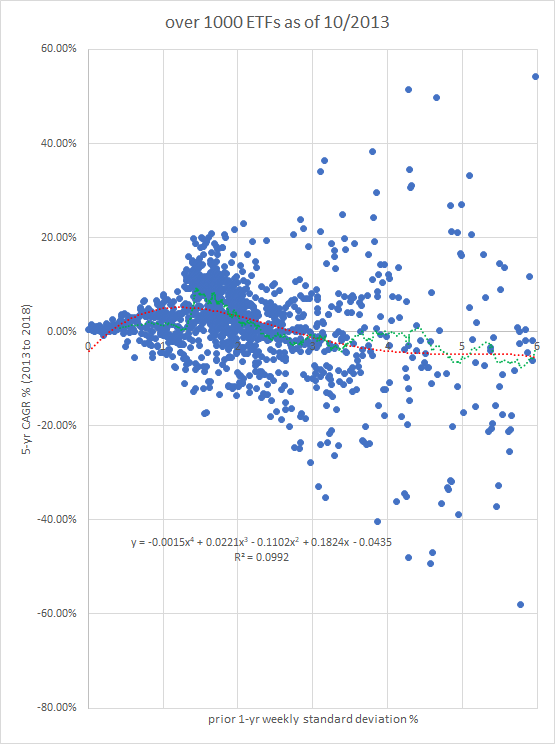 This makes intuitive sense. Divide the investment world into asset classes, from cash to cryptocurrencies, and you’ll see that up to a certain point (say, an index fund, or well-chosen stocks), increased short-term risk generally results in increased rewards over the long run, while after that point (options, leveraged ETFs, penny stocks), the rewards tend to be evanescent.

Financial textbooks all picture the risk-reward continuum as a straight upward line. If we think of it as a curve instead, with a shape quite like that of the red line in the above chart, what does that imply in terms of financial practice?

For one thing, risk-adjusted rewards become far more complicated. Two investments with the same Sharpe ratio may have the same risk-adjusted reward if the risk-reward ratio is a straight line; but if the ratio is a curve, then you have to make some pretty radical adjustments to that ratio. This is a good thing, since both a municipal bond ETF and a 3X daily leveraged ETF can have higher Sharpe ratios than an index fund, and arguably that shouldn’t be the case.

For another, the recognition that at a certain point lowering risk can increase returns should make a big difference in how we look at investing. It helps justify low-beta approaches, low-volatility approaches, and increased carefulness in how thoroughly we examine our investment opportunities. The idea that higher risk will lead to higher returns has been used to justify a lot of very risky investments without due consideration of their merits.

XII. How to reduce risk while increasing reward

The same is true for investing. Research every stock you buy, every investment you make. Don’t follow the hype, don’t trust talking heads, don’t rely on hunches or instinct, don’t follow one or two simple rules/factors and ignore everything else about your investments. Remember that risk and reward are on a curve, and reach for the top of that curve. That’s the way to win the investment game.

Yuval Taylor
2.58K Followers
Author of The Stock Evaluator
Weekly evaluation of thousands of stocks based on sound financial metrics.

I am the author of Zora and Langston: A Story of Friendship and Betrayal, as well as other books; I am also product manager at Portfolio123, a small financial technology firm. In my spare time I invest, primarily in microcaps; investigate investment conundrums; and write about my investigations on Seeking Alpha and on my blog, http://backland.typepad.com/investigations. I am now offering a subscription service, The Stock Evaluator, which sends out weekly rankings for over 4,000 stocks; you can reach it here: https://seekingalpha.com/author/yuval-taylor/research.