If it wasn't before, it is definitely a slump now. The National Association of Realtors (NAR) said today that the sales of existing homes across the US in September 2018 fell more than 3% seasonally-adjusted from August. At just 5.15 million (SAAR), that's the lowest volume in almost three years. 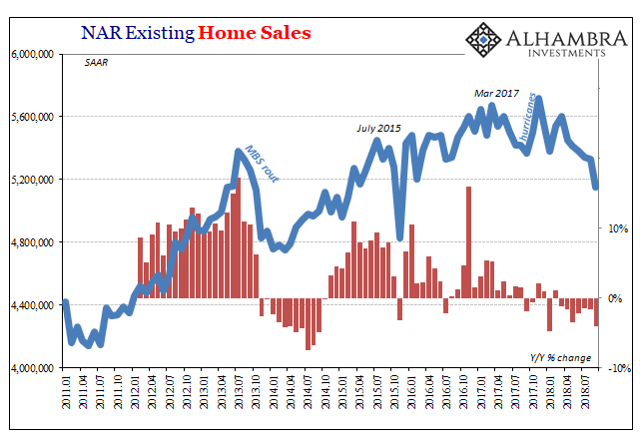 Hurricane Harvey had managed to disrupt a good chunk of resale activity in September 2017, and yet there is only Florence to blame for September 2018 which managed somehow to post significantly fewer home sales. Year-over-year, sales activity dropped by more than 4%.

Economists want to make this about interest rates. That's a big change from late last year when the hurricane high had many convinced that the economy was so much booming not even the Fed could disrupt the real estate sector.

To begin 2018, there was only strong, robust, and the several variations of the theme. Resales had reached an 11-year high which supposedly meant like everything else globally synchronized growth was real and inflation hysteria justified. The consequences of those would have been, had they been legitimate processes, higher mortgage rates regardless. The economy is booming, requiring normalization, and then normalization totally disrupts the boom?

That's not how this works. Three-quarters through the year, it's a different story:

A decade's high mortgage rates are preventing consumers from making quick decisions on home purchases. All the while, affordable home listings remain low, continuing to spur underperforming sales activity across the country.

Mortgage rates follow the 10-year UST benchmark rate. They started the year on average ~4%. Interest rose to ~4.6% for most of the summer including September. A 60 bps increase off historic lows is time for a sizable housing slump? 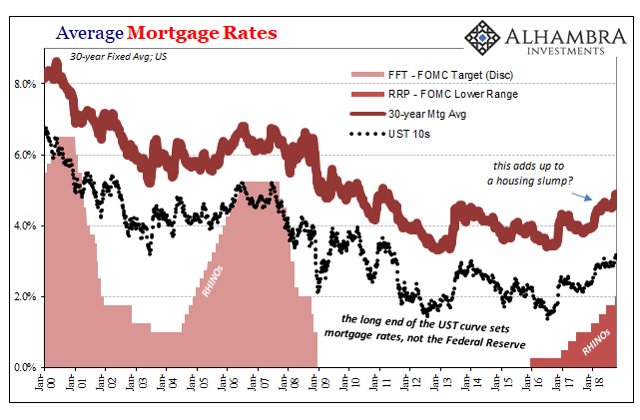 It's not the chart for mortgage rates that should have gotten realtors' attention. Instead, it's this one from the NAR: 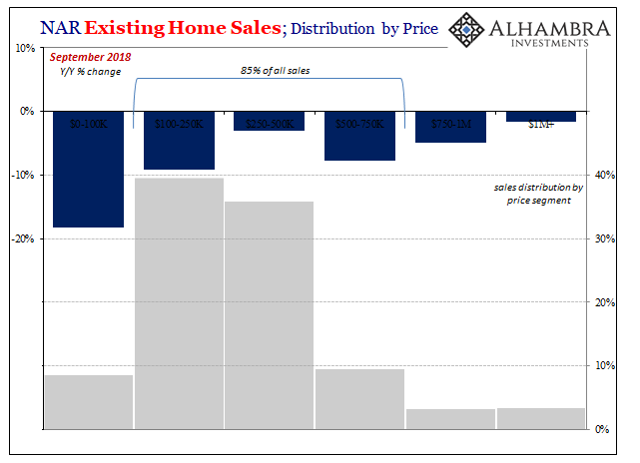 Sales were down across the board in September, at all levels. For the past few years, the real estate market had been bifurcated like the economy. Those who were doing well bought high-end houses no matter what happened along the way, no matter how much they cost including monthly payment schedules. Those who haven't been, and in this economy the last eleven years there are way, way too many of these "missing" Americans, they not only stopped buying houses, but they also actually stopped selling what they had been fortunate enough to hold onto.

Inventory may have bottomed out in recent months, but now demand is weak even in the upper tiers. That's a potentially broad-based shift that suggests something way more potent (negative) than 60 bps of interest rates. 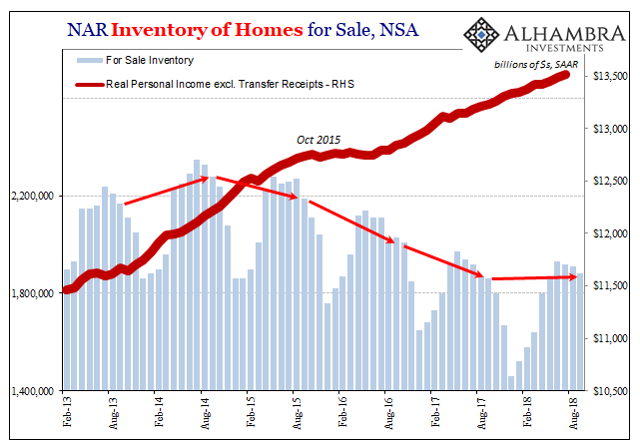 A housing slump just isn't consistent with a booming economy, which is why the blame for the Fed. It makes a very convenient scapegoat this time because it is for the first time acting in the same direction as the real world (eurodollars and the economy). The world tried hard to pretend 2015 didn't happen, or that it was an oil supply glut and distant overseas turmoil.

It didn't hit the resale market all that much - except in the undercurrent of inventory shrinking like income growth and the slowing labor market. Now the next one, possibly, is showing up in 2018 in far more places across the housing landscape, sales to construction.

Instead, it may be that even people on top are starting to get a little nervous about the (always unexpected) reappearance of "overseas turmoil." And not just home buyers, perhaps also the banks funding them.

Even though the economy is strong, Wells Fargo (WFC) is lending less. The bank's loan book dipped by 1% from a year ago as mortgages fell sharply.

Jeffrey Snider
4.65K Followers
As Head of Global Investment Research for Alhambra Investment Partners, Jeff spearheads the investment research efforts while providing close contact to Alhambra’s client base. Jeff joined Atlantic Capital Management, Inc., in Buffalo, NY, as an intern while completing studies at Canisius College. After graduating in 1996 with a Bachelor’s degree in Finance, Jeff took over the operations of that firm while adding to the portfolio management and stock research process. In 2000, Jeff moved to West Palm Beach to join Tom Nolan with Atlantic Capital Management of Florida, Inc. During the early part of the 2000′s he began to develop the research capability that ACM is known for. As part of the portfolio management team, Jeff was an integral part in growing ACM and building the comprehensive research/management services, and then turning that investment research into outstanding investment performance. As part of that research effort, Jeff authored and published numerous in-depth investment reports that ran contrary to established opinion. In the nearly year and a half run-up to the panic in 2008, Jeff analyzed and reported on the deteriorating state of the economy and markets. In early 2009, while conventional wisdom focused on near-perpetual gloom, his next series of reports provided insight into the formative ending process of the economic contraction and a comprehensive review of factors that were leading to the market’s resurrection. In 2012, after the merger between ACM and Alhambra Investment Partners, Jeff came on board Alhambra as Head of Global Investment Research. Currently, Jeff is published nationally at RealClearMarkets, ZeroHedge, Minyanville and Yahoo!Finance. Jeff holds a FINRA Series 65 Investment Advisor License.
Follow
9 Comments