As the central bank of the United States, the Fed is responsible for conducting our nation's monetary policy and maintaining the integrity and stability of our financial system.

In recent years the government has been using the Fed's surplus capital account as a piggy bank to pay for government expenditures.

As the Fed's capital account shrinks, the Fed is further weakened by the deterioration in value of their portfolio.

The Federal Reserve is a unique institution. As the central bank of the United States the Fed is responsible for conducting our nation’s monetary policy and maintaining the integrity and stability of our financial system. It is the most influential central bank in the world. Yet it is neither owned nor funded by the government.

The Fed is owned by the member banks it supervises. Its capital structure has two components. The first is “paid-in-capital”, which comes from the member banks. By law, each member bank must invest an amount equal to 3% of their own capital stock and surplus in the Federal Reserve. The second part is the “surplus” which represents that portion of net income which is retained. Historically, the surplus was set to equal the amount of the paid-in-capital.

-To provide capital to supplement paid-in-capital in the event of a loss.

-To provide assurance of the central bank’s strength and stability.

Like all financial entities, the greater the capital, both in absolute and in percentage terms, the stronger the institution.

In recent years, however, the government has been using the Fed’s surplus capital account as a piggy bank.

In 2015 congress passed the Fixing America’s Surface Transportation (FAST) Act for infrastructure improvement. Normally, these expenditures are funded by taxes on gasoline and diesel fuels. The gas taxes have not been increased since 1993 and there was no desire to change that. Instead, congress raided the Fed by capping the Fed surplus at $10 billion, thereby grabbing the $19 billion from the surplus account that exceeded the cap. Congress also raised another $6 billion over 10 years by cutting the annual dividend the Fed paid to its large member banks from a fixed rate of 6% to the yield on the 10 year US Treasury Note, which at the time ranged between 2.0 – 2.5%.

Additionally, this past spring while congress was wrestling with how to finance their fiscal 2018 budget, they reduced the Fed surplus cap further to $6.825 billion, thereby taking another $3.175 billion from the Fed surplus account to help pay for the Economic Growth Act of 2018.

These measures together have reduced the Fed’s capital account from a high of $57 billion in 2014 to the current level of $39 billion. As can be seen from the chart below, total capital/total assets has also declined to 0.9%. 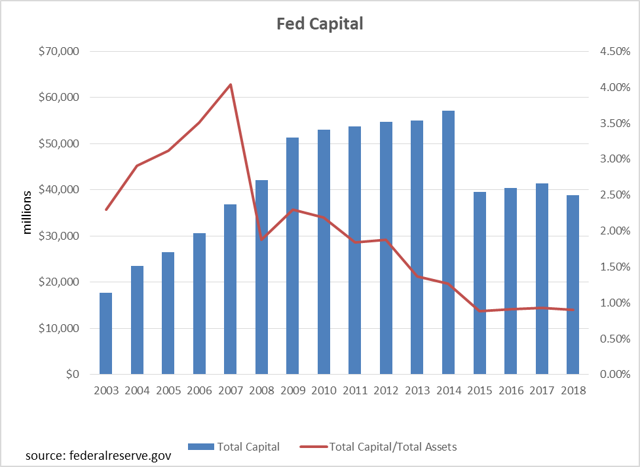 By any standard, this is not viewed as a strong capital/asset ratio.

Its weakness is compounded by an issue raised in last month’s article “The Fed has a Problem” which addressed the valuation of the Fed’s Balance Sheet. In sum, while the Fed uses the favorable accounting treatment of carrying their SOMA holdings of US Treasury securities and Agency MBS securities at amortized cost, as interest rates have risen, the market value of their holdings has dropped below their cost. The result is a significant unrealized loss on the Fed’s portfolio.

The most recently published Fed Quarterly Financial Report dated June 30, 2018 shows an unrealized loss on the Fed’s SOMA holdings of $19.5 billion, equal to half of the Fed’s total capital of $39 billion.

Since then, the yield on the 10 year US Treasury Note has risen from 2.85% on 6/30/18 to 3.05% on 9/30/18. Consequently, when the Fed files their quarterly financial statements for September 30 sometime in November, their unrealized loss will be significantly greater.

Fortunately, the Fed can carry unrealized losses on their balance sheet for quite some time. Additionally, if necessary the Fed has several options to improve their capital position. First, while member banks must contribute 3% of their own capital as paid-in-capital to the Fed, they must hold another 3% on reserve. The Fed may therefore, make a call on their member banks for this additional capital. Second, the Fed can retain more of their net income instead of remitting it to the Treasury. Recently, however, as the Fed has been raising rates their net income has been declining as the interest they earn from their fixed rate assets is being offset by the rising expense they are paying of interest on excess reserves (IOER.) Third, the Fed can simply print money to meet their obligations. Finally, the Treasury can provide a capital infusion.

Nonetheless, the Fed’s financial position has deteriorated due to its shrinking capital which will reduce its flexibility, and may impinge on its independence going forward.

Follow Michael Gray and get email alerts
+
Add a comment
Disagree with this article? Submit your own.
To report a factual error in this article, click here.
Your feedback matters to us!