Warning: The following article contains data that some might find shocking. While the figures are grounded, they are not necessarily forecasts.

If silver were to rise to bring the gold-to-silver ratio back to its long-term average, the silver price must rise to $61/oz. (Of course, gold (GLD) prices could also fall to lower the ratio. But let's assume gold is priced at fair value.) 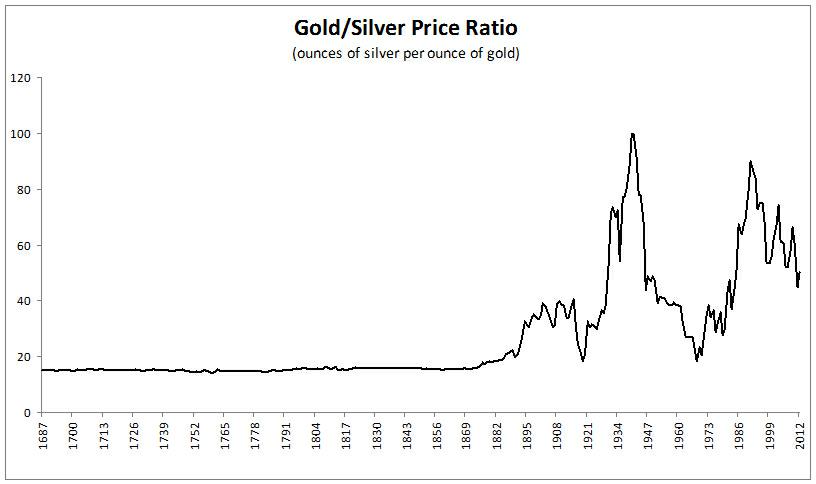 Why might the historical gold-to-silver ratio have a natural average much lower than it is today? The chart below shows that the lower ratio might have a geological origin.

According to Jefferson Lab, silver is almost 19 times more abundant than gold within the Earth's crust. While this doesn't necessarily mean the deposits are accessible using modern technology, it possibly marks a natural long-run relationship between the two metals. To reach this ratio with gold, the silver price would need to hit approximately $90/oz.

A more relevant measure of physical availability is reserves and production. According to the US Geological Survey 'reserves' are defined as follows:

That part of the reserve base which could be economically extracted or produced at the time of determination. The term reserves need not signify that extraction facilities are in place and operative. Reserves include only recoverable materials.

According to US Geological Survey's Mineral Commodity Summaries (January 2012), 2011 reserves and production for silver was respectively ten and nine times as abundant than gold.

In addition to the natural physical abundance and production data, which favors silver relative to gold, above-ground silver inventory is constantly depleted because it is used for industrial purposes. In contrast, most gold that has ever been mined exists in a vault somewhere.

However, anyone truly looking to get physical can't beat the real thing: bullion.

Additional disclosure: This is not advice. While Plan B Economics makes every effort to provide high quality information, the information is not guaranteed to be accurate and should not be relied on. Investing involves risk and you could lose all your money. Consult a professional advisor before making any investing decisions.

Dumb Wealth
2.7K Followers
Website: dumbwealth.com I created DumbWealth as an anonymous open journal to help my children, family and friends build wealth and survive the working world. I am a 20 year investments industry veteran and I've witnessed a ton of BS. I want people to learn from all the mistakes I've seen, including my own.