On Nov. 6, 2018 Amplify launched the BlackSwan Growth & Treasury Core ETF (NYSEARCA:SWAN) based on S-Networks SWANXT index which seeks significant exposure to the S&P 500 while mitigating downside risk. The strategy put forth to attain this holy grail of investing involves buying long term call options (LEAPs) on the S&P 500 coupled with a ladder of treasuries having a duration approximately equal to the 10-year T-bond.

The initial exposure to each asset category is set at 10% for call options with a 0.7 delta and 90% in treasuries. The portfolio will be rebalanced twice a year. For those rusty with their option pricing models, a 0.7 delta should result in a 7% move in the option price for every 10% move in the stock price. This does not mean SWAN has 70% exposure to the S&P 500 or even that 10% of SWAN has 70% exposure. The return of the option and the delta of the option are two different entities.

The SWANXT index takes a different tact by using a barbell type strategy: a risky LEAP coupled with relatively safe treasury bonds. The advantages of using LEAPs instead of short-term options minimizes transaction costs while maintaining exposure for a significant period. The implied volatility of LEAPs are more muted relative to shorter-term options while using a 0.7 delta helps reduce paying for the time value of the option relative to at-the-money options. Note at-the-money options generally have a delta of 0.5. When the market does well, the LEAPs should do very well. If the market does poorly, the LEAP value may easily go to zero, but as investors flock to safety, the treasuries should do relatively well.

Thus, if the S&P increases 12%, 10% of the portfolio could easily make 50%, 90% of the portfolio could make 3%, and SWANXT would theoretically increase 8%. This is exactly what occurred in 2005 based on empirical values of options, equity and treasuries at the time. The three big questions to be answered is 1) how well will the SWAN ETF work over time, 2) does it significantly mitigate downside risk, and 3) with any portfolio insurance type strategy, what is the cost?

It is of interest to note what "Black Swan" ETFs are trying to avoid. If one can avoid a 40% loss, then an investor will not need to earn up to 67% to get back to even. Table 1 shows different loss thresholds and the probability of suffering the loss threshold or greater anytime after entering the market from 1941 to 2018. There is a 33% chance of a 10% or greater loss and a 4% probability of a 40% or greater loss. The latter was experienced during the 2000 tech crash and 2008 financial crisis. There is a 20% probability of experiencing the typically defined bear market of -20% or worse. Although the probabilities are not large, avoiding 30% losses that occur approximately once every 10 years would be valuable.

Option prices on the SPX index are only available from 1990 and LEAPs are generally only available with expiration dates in December, January, and June. To replicate what a SWANXT index and its SWAN ETF counterpart might achieve, December options with 15 months before expiration are purchased using the ask at the end of September, sold at the end of the following September with approximately 3 months to expiration at the bid, and rolled over each year into a new 15-month LEAP at which time the portfolio is rebalanced to 90/10. The option closest to 0.7 delta is purchased.

Unlike the actual SWAN ETF, only annual rebalancing is assumed to keep data collection relatively simple. The disadvantage of this is we may be forced to buy options during a short-term volatility spike, although this is also an issue when buying options only twice a year. In addition, the option allocation percent along with the option delta during the year will deviate from the initial 10% and 0.7 delta to a greater extent than with semi-annual rebalancing. However, the results should give us an idea if the underlying logic of the strategy works.

Annual returns for the S&P 500, a constant 10-year maturity T-bond, the 15-month call option, and a portfolio of 90/10 in treasuries/LEAPs are calculated. A protective put strategy using closest to at-the-money options without being in the money is shown for comparison purposes. The put option used is also a 15-month LEAP and rolled over each September. Results ending Sept. 28, 1991 to Sept. 30, 2015 are tabulated, the end date is 2015 as my option data set ends in 2015. Data is from DeltaNeutral and The Center for Research in Security Prices.

Figure 1 shows the cumulative return from 1990 to 2015 for the S&P 500, 10-year T-bonds, my 90/10 pseudo SWAN strategy, and a protective put strategy. The reader may be surprised the SWAN 90/10 strategy has the highest geometric annualized return, 10.35%. The S&P 500 including all reinvested dividends returned 10.06%. While my annually rebalanced SWAN rises at a continuous clip, the S&P 500 is clearly more volatile, outperforming over some periods and declining dramatically over others. 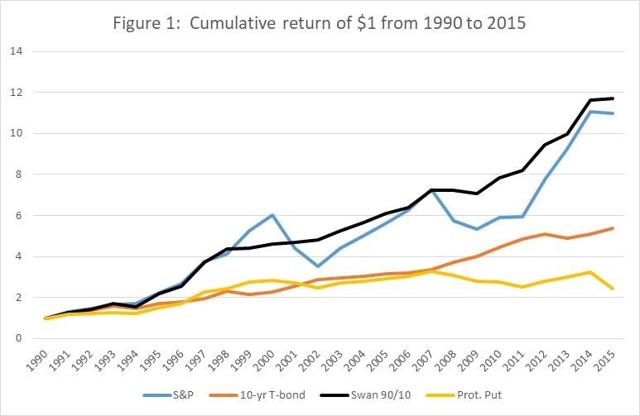 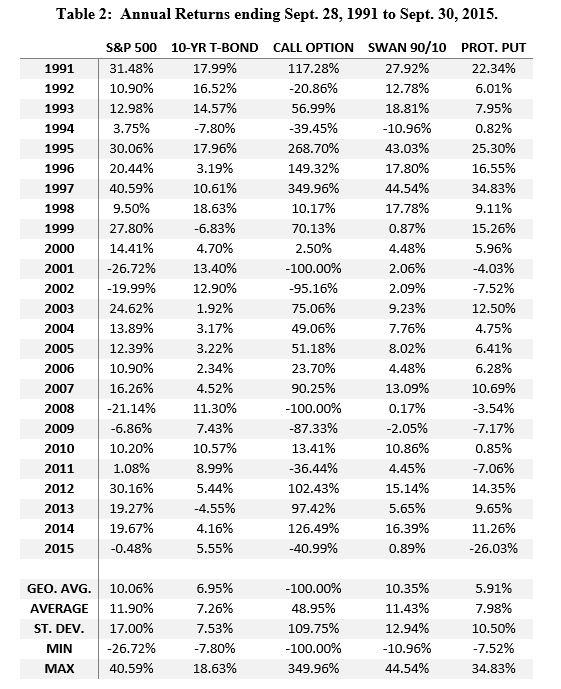 To see how SWAN might perform during the height of a market crash, Table 3 shows the monthly results for the S&P 500, 10-yr T-bonds, the 0.7 delta call option, and my SWAN 90/10 strategy from Sept. 30, 2008 to Sept. 30, 2009. The final column shows how the original 10% weight in options can change over time. Although the results here are based on annual rebalancing, Table 3 shows how quickly the option weight can fall below 10%. By Feb. 27, 2009, the 10% in the option fell to 0.26% as the option lost nearly all of its value. In better market environments, the portfolio weight in the option could obviously rise above 10%. 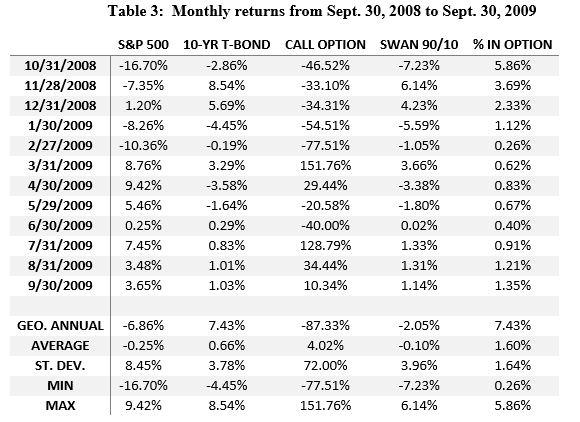 This is one of the possible drawbacks of SWANXT and the SWAN ETF designed to track this index as it only rebalances twice a year. A market crash and recovery within any rebalance period would not result in any excess returns to the option component of SWAN. Table 3 demonstrates this during the market rebound from March to September 2009 as the S&P returns 45% over these 7 months while the pseudo SWAN created in this study only returns 1%. A rebalance in March using semi-annual rebalancing would have increased the performance of my 90/10 strategy dramatically.

Thus, SWAN is not necessarily a fund to run to after a market crash, it is a fund that should partially participate in market gains while significantly reducing the loss in the event of a market crash. After a crash and until the next rebalance, SWAN's option component will likely be close to zero, with the silver lining being it was only 10% of the ETF.

There are two additional caveats to consider before investing in SWAN:

Based on historical data, SWANXT and the newly issued SWAN ETF designed to track this index works and performs significantly better than a protective put strategy. Surprisingly, the return of my annually rebalanced SWAN 90/10 portfolio exceeds the S&P 500 as well. If the market experiences a large crash in the next 10 years, it would not surprise me to see SWAN matching or outperforming the market over another 10+ year horizon while avoiding the roller coaster ride along the way.

William Trainor, CFA
151 Followers
William J. Trainor Jr., Ph.D., CFA is a Professor of Finance in the Department of Economics and Finance at East Tennessee State University. Dr. Trainor received his Ph.D. in Finance from Virginia Tech in 1994 and has been with ETSU since 2006. He has been a Chartered Financial Analyst Charterholder since 2002 and was a Fulbright Scholar in 2014. Trainor has published extensively in journals such as Financial Review, Journal of Index Investing, Journal of Personal Finance, Journal of Financial Planning, Journal of Investing, Atlantic Economic Journal, and Financial Services Review among others. In November of 2018, a fund with the ticker SWAN was introduced to the NYSE based on research published in the Journal of Investing in ameliorating downside risk.  He is also on the Investment Board with ARGI Financial.Dr. Trainor teaches Investments, Applied Equity Valuation in which students help manage part of TVA’s investment portfolio, and Applied Corporate Finance in the MBA and AMBA programs.
Follow

Disclosure: I/we have no positions in any stocks mentioned, but may initiate a long position in SWAN over the next 72 hours. I wrote this article myself, and it expresses my own opinions. I am not receiving compensation for it (other than from Seeking Alpha). I have no business relationship with any company whose stock is mentioned in this article.

Additional disclosure: I am one of three authors on the original study that was used by S-Network to help create the SWANXT index. I have no financial relationship (past or present) with S-Network or Amplify.