Florida allows 30 dispensaries per licensee - a total that is set to rise to 35 very soon.

There are 74 dispensaries in Florida today, including 22 from state-leader Trulieve with Curaleaf in second with 17 dispensaries.

Two huge new competitors are entering as well: Both Medmen and Green Thumb have signed leases (five and nine, respectively) to open dispensaries in Florida.

Note: All dollar figures herein, unless otherwise noted, are in US dollars. Most of these companies are traded on Canadian stock exchanges (with US OTC tickers) but file in US dollars. 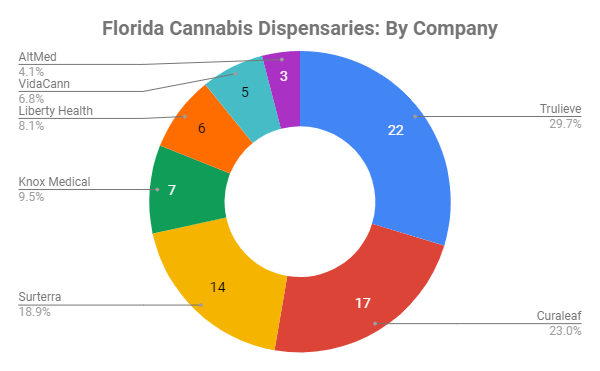 This is a brief summary of the Florida cannabis market and the players in that market.

Florida's medical cannabis market is young and expanding, after a November 2016 vote legalized medical cannabis. Over the past year, Florida's registered patient total rose 280% YoY to 193,083 patients and Florida added ~550 patients/day during the week of November 15.

Each company that is licensed in Florida is permitted to operate 25 dispensaries plus an additional 5 dispensaries for every 100,000 patients. Given current patient counts, companies can operate 30 dispensaries today, and that figure will expand to 35 soon.

Trulieve (OTCQX:TCNNF) is the top cannabis company in Florida today, with 22 dispensaries and perhaps two-thirds of cannabis sales by volume. Despite that lead, there are strong challengers in Curaleaf (LDVTF), Surterra, Liberty Health (OTCQX:LHSIF), and others.

New competitors are also coming: Medmen (OTCQB:MMNFF) is poised to enter the Florida market, acquiring five key retail locations in September 2018. Green Thumb (OTCQX:GTBIF) is also looking to launch in Florida, with nine dispensaries coming soon after closing on a purchase of a Florida licensee on November 8.

Based on my previous research on the growth of legalized cannabis markets, I expect Florida to grow rapidly for three-to-four years before reaching maturity. This implies that Florida's rapid growth will continue until perhaps 2020 or 2021. Each of the companies herein is likely to benefit from that growth, although that growth will be spread unevenly between them.

Florida legalized medical cannabis by vote in November 2016, with the roll-out occurring in 2017. 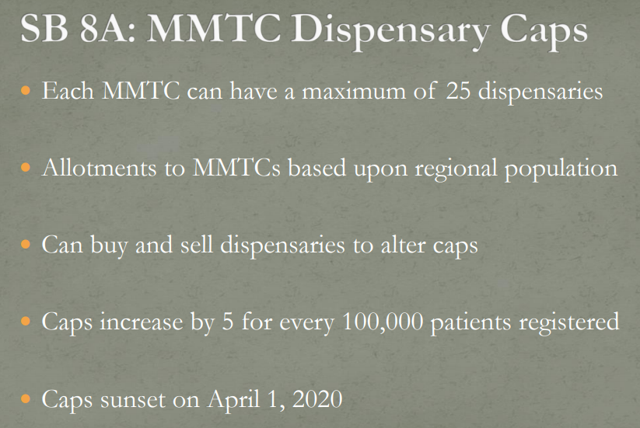 Today, each licensee in Florida is allowed 30 dispensaries given current patient counts. This maximum limit is tied to the number of registered medical patients in Florida and Trulieve has challenged that limit. But patient count is increasing rapidly: 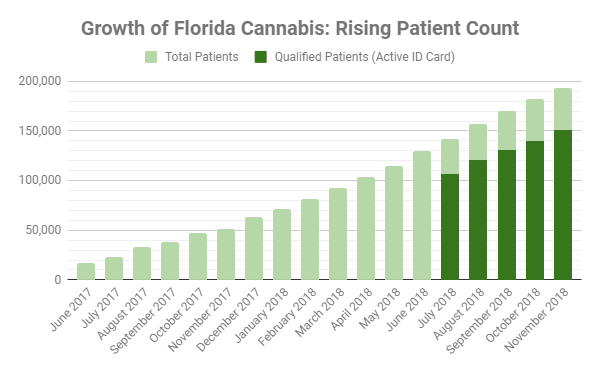 (Author based on data from Florida Office of Medical Marijuana Use)

Based on the current rate of new patient additions, Florida will pass 200,000 patients around the end of November. This would increase the dispensary limit to 35. At the current rate of patient additions (and extrapolating data out this far is prone to errors), Florida could hit 300,000 patients in ~Q2/19 (late May or early June), which would allow licensees to open 40 dispensaries.

"'There's no smoking allowed as of yet, so with the exception of these little vape cups, these K-cups that have the flower in them, every product requires processing,' said Ben Pollara, who helped spearhead the constitutional amendment that approved medical marijuana in 2016."

Florida's medical cannabis laws are a bit backwards. For example, Florida does not allow sale of dried cannabis for smoking. Instead, dried cannabis must be sold inside a "tamper-proof" vaping container, designed to ensure that consumer vape cannabis instead of smoking it. While paternalistic, it still beats cannabis being illegal. If these laws are liberalized - much less recreational cannabis being allowed - all licensees in Florida are likely to benefit. 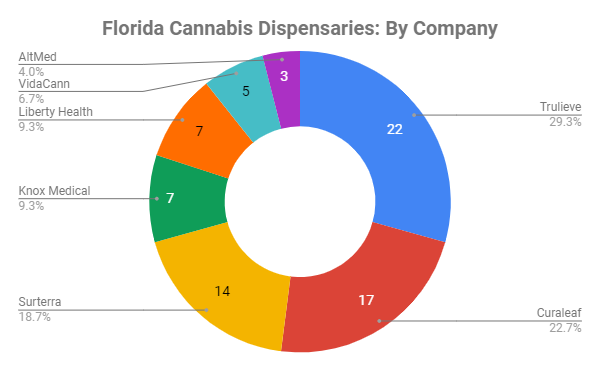 (Author based on data from Florida Health, as of 11/20, and company filings)

There are 74 dispensaries in Florida, after the opening of Curaleaf's 17th dispensary on November 20 and including Liberty Health Palm Harbor. There are also several companies that do not have dispensaries (or "MMTCs" - medical marijuana treatment centers) in Florida but which have licenses to cultivate and/or which sell cannabis by delivery:

With this market in mind, here are the players in Florida cannabis:

Trulieve is a profitable company, recording record revenue of $28.3 million in Q3/18 (ending Sept. 30, 2018) with $12.6 million in adjusted EBITDA and $17.5 million in net income. After declines today (Nov. 20), Trulieve has an enterprise value of ~$1 billion, implying an annualized run-rate EV/Adjusted EBITDA of ~22x.

I own shares of Trulieve, and have covered Trulieve in-depth on The Growth Operation in "Trulieve: Growth Continues With Another Quarter In The Books" (published on Nov. 19). 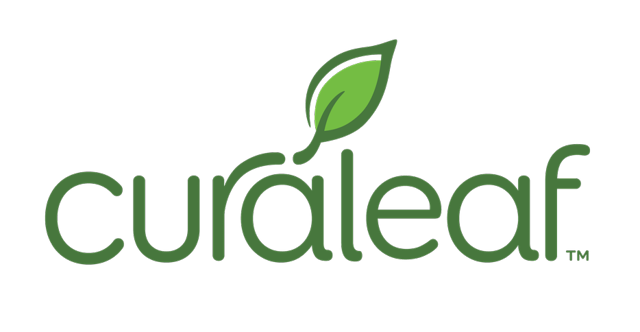 Curaleaf is the second-largest cannabis producer in Florida. Unlike Trulieve, Curaleaf is already a multi-state operator, with operations across the country including Florida, the northeast, and the west coast: 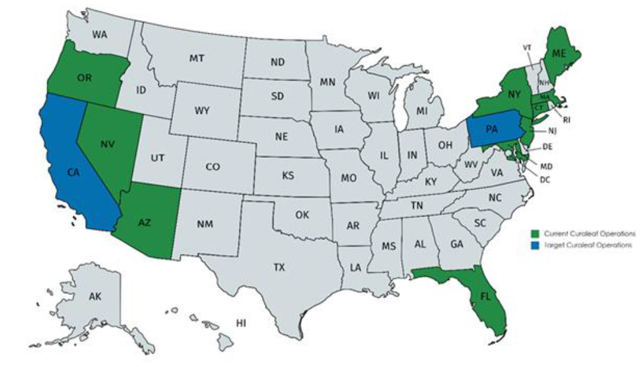 Curaleaf has 17 dispensaries in Florida and 33 dispensaries around the country. Curaleaf went public in September 2018 and has a market cap of ~$2.4 billion, based on 474 million diluted shares. Unlike Trulieve, Curaleaf is not yet profitable. In Q2/18 (ending June 30), Curaleaf generated $14.6 million in revenue and $4.9 million in gross profits. These gross profits were offset by $14.6 million in operating costs, resulting in a net loss to Curaleaf's then-parent (Curaleaf wasn't public in June 2018) of $4.9 million.

Curaleaf will report Q3/18 earnings (ending Sept. 30) on November 26, after hours. This will be Curaleaf's first earnings release since they went public.

I covered Curaleaf in-depth on The Growth Operation in "Curaleaf: One Of America's Largest Cannabis Companies" (published on Nov. 22). 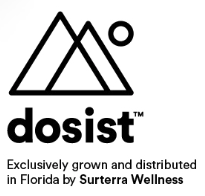 Currently, Surterra is promoting Dosist products. According to Crunchbase, "Dosist is a developer of proprietary vaporizing dose-pens created to provide safe, targeted and effective cannabis." Dosist is also privately-owned but has a partnership with Hiku Brands (now a Canopy Growth (CGC) company) in Canada. Because of that partnership, Canopy Growth investors may be interested to track the success of Dosist in Florida and elsewhere. Vapes are not yet legal in Canada but should be legalized during 2019.

Knox Medical operates seven cannabis dispensaries in Florida, placing in fourth in the state. Knox Medical is a fully-owned subsidiary of Cansortium, which states they are "the largest US Based, international, vertically integrated medical cannabis company in the world." Given a dearth of information on Cansortium's website, it is unclear to me if this assertion is correct.

Cansortium is a private company. They also have operations in, at least, Texas and Pennsylvania. 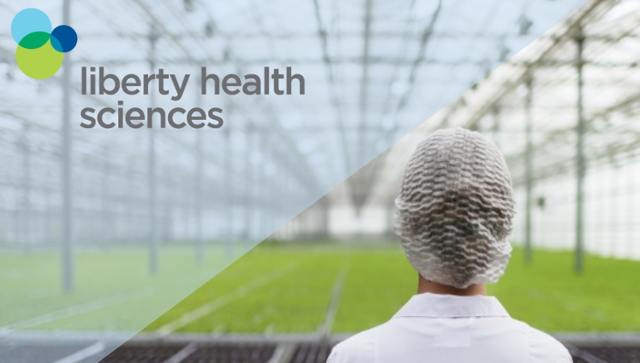 Back in the land of companies relevant to public investors, Liberty Health Sciences also operates seven dispensaries in Florida - and aims to open five new dispensaries before the end of the year. Liberty Health is perhaps most-known for its former (and perhaps future) affiliation with Aphria (APHA). Aphria was forced to divest its stake in Liberty Health in September to be eligible for a listing on the New York Stock Exchange (see my coverage in "After Aurora Comes Aphria: Canadian Cannabis On The NYSE") and to comply with requirements of the Toronto Stock Exchange. While Aphria divested its stake in Liberty Health, they retain the right to repurchase that stake:

"As part of the transaction, Aphria retains an irrevocable option to repurchase the Shares or any replacement securities from the buyers for a period of up to five years, subject to the satisfaction of certain conditions as further described below. As a result of the transaction, Aphria has divested its remaining U.S. cannabis assets from its balance sheet in accordance with the staff notice and requirements of the Toronto Stock Exchange ('TSX')."

In its most recent quarter (ending August 31), Liberty Health earned C$2.2 million in revenue, C$800,000 in gross profits, and spent C$5.8 million in operating expenses. Liberty Health has an enterprise value of ~C$500 million. I have covered Liberty Health Sciences in depth on The Growth Operation in "Liberty Health: An Aphria-Linked Competitor To Trulieve". 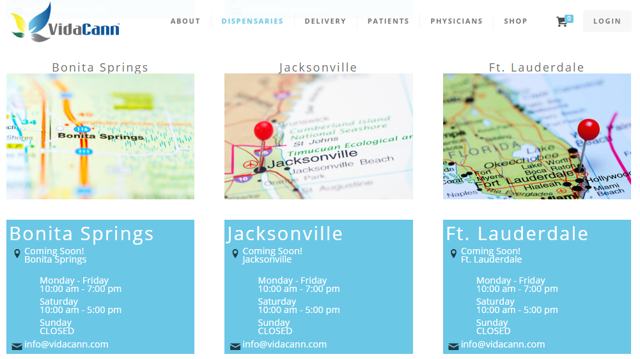 Vidacann operates five dispensaries in Florida. However, like many of the smaller producers on this list, they are a private company.

Vidacann has big expansion plans: their dispensaries page lists their five open dispensaries but also includes 12 additional dispensaries as "Coming Soon!". That would increase Vidacann's dispensary count to 17, placing them tied for second on the list of providers - assuming everyone else stands still. That assumption, however, is unlikely to be a good one given the rapid growth of Florida's patient count.

AltMed Florida produces products under the "MÜV" brand name and has three dispensaries in Florida, clustered around Tampa. AltMed - short for Alternative Medical Enterprises - has raised $35 million to fund its operations in Florida and Arizona.

As with Vidacann and others, AltMed is a private company.

The most notable of the companies that do not have dispensaries in Florida, Medmen is targeting an entrance to Florida as well. In September, Medmen closed on an acquisition of five retail locations in Florida:

This move comes after Medmen acquired Florida licensee Treadwell, in a $53 million (half cash, half equity) deal announced in June 2018.

Medmen has operations in 12 states and licenses for 66 retail stores, although their open store count is much lower: Medmen's Stores page shows 15 retail stores, with 8 in California, 3 in Nevada, and 4 in New York.

Last quarter, Medmen generated $21 million in revenue and $6 million in gross profit ex-bio. This gross profit was offset by $73 million in operating expenses. Medmen has a market cap of ~$2.1 billion.

Medmen will release results for their Q1/19 (ending Sept. 30, 2018) after-hours on November 29, 2018. I have written about Medmen several times on this platform, most recently in "Bad News Bears: MedMen Drops Bad News At Midnight On The Weekend".

In the June 30, 2018 quarter, Green Thumb generated $13.6 million in revenue, with gross profits (ex-bio) of $6.3 million. Those gross profits were offset by $12.1 million in operating expenses. Green Thumb has an enterprise value of ~$1.4 billion, based on ~153 million outstanding shares.

Florida only legalized cannabis in late 2016, so Florida is likely to be a rapidly-growing market until 2020 or 2021. Based on my previous analysis of Colorado and Washington state sales trends, it takes ~three to four years for a newly-legalized cannabis market to reach maturity and stable/low levels of growth. This would imply that Florida still has another year or two of high growth in front of it - and more than that if cannabis laws are changed (e.g., allowing smokable flower or legalizing recreational cannabis).

Whether Trulieve can retain that market positioning remains to be seen: Competition in Florida is intensifying with the imminent entry of Medmen and Green Thumb into the state and the rapid expansion of smaller players like Vidacann and Liberty Health, as well as the continued growth of Curaleaf.

Disclosure: I am/we are long TCNNF, CGC, APHA. I wrote this article myself, and it expresses my own opinions. I am not receiving compensation for it (other than from Seeking Alpha). I have no business relationship with any company whose stock is mentioned in this article.

Additional disclosure: I also own other cannabis stocks that are not mentioned here.

Follow Jonathan Cooper and get email alerts
+
Add a comment
Disagree with this article? Submit your own.
To report a factual error in this article, click here.
Your feedback matters to us!