In its "Policy Normalization Principles and Plans" report issued in September 2014, the Federal Open Market Committee (FOMC) laid out how it intended to return to a more normal Fed policy following the extraordinary measures it implemented to combat the Financial Crisis of 2008. There were two elements to its plan: gradually raise the Fed funds target, and gradually reduce its security holdings.

The Fed began raising the Fed funds rate in December 2015, and it has made 7 additional moves since, with a current target range of 2.00-2.25%. Most market watchers expect another rate hike when the FOMC concludes its next meeting on December 19th. There has been much speculation about how aggressively the Fed will hike rates in 2019. Even the president has weighed in, saying he thinks the Fed has raised rates enough.

The policy component of reducing the Fed's security holdings has received much less attention. In June 2017, the FOMC outlined its approach for reducing its security holdings. It would decrease the amount of reinvestment of principal received from maturing securities in its System Open Market Account (SOMA) subject to gradually rising caps. Only proceeds of maturities above the monthly caps would be reinvested. The Fed began implementing this plan in October 2017.

Currently, we are at the maximum caps where the first $30 billion in US Treasury maturities each month are not reinvested, and neither are the first $20 billion in Agency MBS maturities, thereby reducing the portfolio by $50 billion per month. This policy is expected to remain in place for some time. As of the end of the third quarter, the SOMA portfolio stood at $4.1 trillion, its lowest level since the end of 2013. 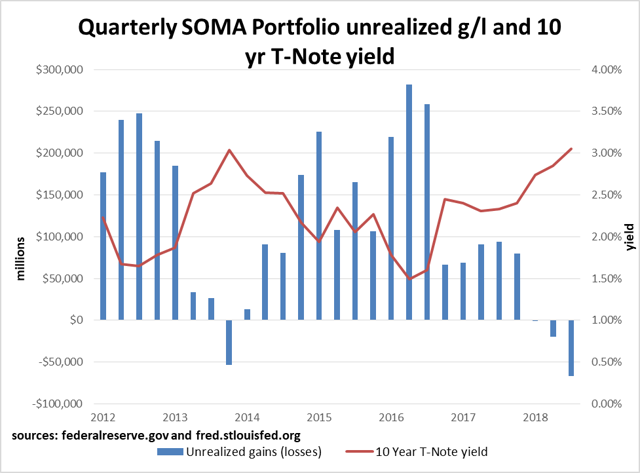 The Fed's SOMA portfolio is comprised of $2.4 trillion (59%) of US Treasury securities and $1.7 trillion (41%) of Agency MBS. The Fed is the world's largest individual owner of each asset class. Traditionally the Fed only purchased US Treasury securities, but during the Financial Crisis of 2008, it deviated from this policy. To help the struggling banks improve their liquidity, the Fed purchased toxic, illiquid MBS, moving the risk from the banks' to the Fed's balance sheet. As might be expected, these securities have not performed particularly well. 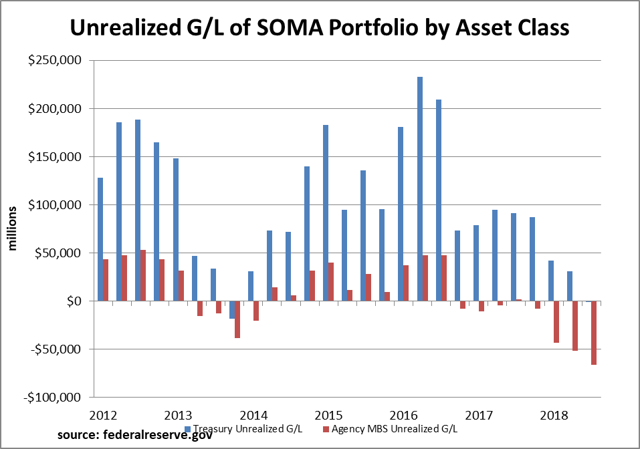 It is worth noting that the total capital of the Fed is only $39.1 billion. Currently, the Fed's unrealized loss represents 169% of its capital.

Some have suggested that the Fed should accelerate its balance sheet reduction and consider selling securities. Bloomberg reported yesterday that Secretary of the Treasury, Steve Mnuchin, had discussed this issue privately with the Treasury Borrowing Advisory Committee in October at a regularly scheduled quarterly meeting. Large-scale security sales, however, would result in significant realized losses.

The Fed has stated that it is not concerned with unrealized losses. In its report "SOMA's Unrealized Loss: What does it mean?" published August 13, 2018, on the Fed website, the Fed addresses the various mechanisms it has in place to account for unrealized losses. It even comments on its ability to handle realized losses by creating a deferred asset on the balance sheet. The Fed emphasizes that it will continue to meet its financial obligations and pursue its statutory goals of maximum employment and price stability.

The Fed's accounting maneuvers, however, do not change the fact that its financial position has deteriorated. This may limit its flexibility in implementing policy. The first way it may be affected is by losing its independence. There already is pressure on the Fed from the administration, and any sign of financial weakness, including widespread discussion of its losses, may result in efforts to put more congressional oversight on the Fed. The second area of concern is market confidence. In many ways, the stability of our financial system is due to the confidence that the central bank is stable and in control. Continued financial weakness may erode that confidence. The final area of concern is more practical. In the event of another financial crisis, the Fed may not have the tools necessary to restore stability. Will cutting rates by 225 basis points be enough to contain the next financial problem? With an already bloated balance sheet, will the Fed be able to implement QE4, QE5 and QE6?

The Fed is dealing with the unintended consequences of the extraordinary measures it used to combat the Financial Crisis of 2008. We are in unchartered territory as the Fed attempts to unwind those policies.

Michael Gray
79 Followers
I've devoted my career to following the capital markets and managing fixed income assets.  I founded Gray Capital Management LLC and before that was Head of Taxable Fixed Income at Fidelity Investments.  I have an MBA in Finance from Wharton and a BA in Economics from Union College.
Follow