Texas Pacific Land Trust (NYSE:TPL) is not your typical trust, nor is it like any other company. Its primary asset is land, much of it arid and not very habitable. The Trust has been selling off that land since 1888, and yet it remains one of the largest land owners in Texas. It is too small for most portfolio managers, but it has been one of the hottest stocks on the market the last couple of years. The stock could be had for $30 as recently as 2010. It hit a high of $877.97 in October.

A Brief Review of the Stock Price

Most of the Trust's results revenue comes from the Permian Basin, an area of west Texas and New Mexico. The Permian is the largest oil producing area in the U.S. It has been producing oil for a century, but production of shale oil started in 2012-2013. The Apache Corporation (APA) announced a gas and oil discovery in the area in September of 2016. The Trust's stock price, which had already doubled, went from less than $200 to more than $300 in two months.

The Trust announced the formation of Texas Pacific Water Resources LLC (TPWR) in June of 2017, a wholly owned subsidiary commonly called “the water business” among the Trust’s investors. The stock price went from $300 to more than $400 upon the announcement. TPWR services include "brackish water sourcing, produced-water gathering/treatment/recycling, infrastructure development/construction, disposal, water tracking, analytics and well testing services" to operators in the Permian Basin. The Trust reports that TPWR has a significant focus on large-scale water recycling, and it is committed to sustainable water development.

In April 2018, the Trust announced in its annual report, “2017 marked the most successful year for the Trust in its 130-year history.” Gross income increased by 120.9% and EPS increased by 108.6%. The stock price jumped into the $700 range, and then went up again into the $800 range after the following quarterly report.

In early October 2018, the price began to drop, a month ahead of the quarterly report, and it continued dropping afterwards. The downward trend may or may not have halted as of this writing. 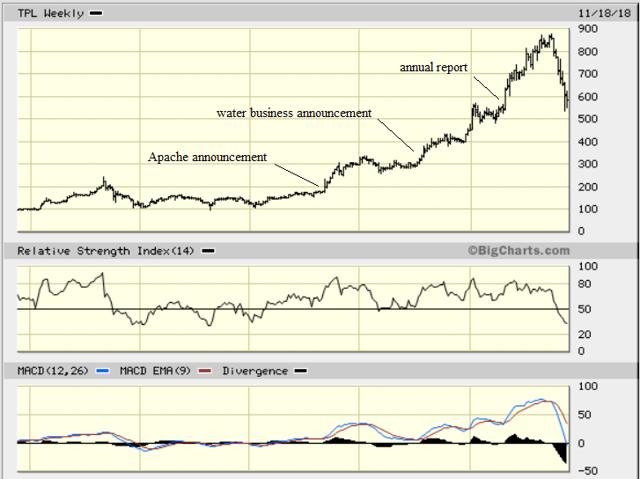 The Trust reported a year-over-year increase of 40.8% in the third quarter, an increase any company would be thrilled to have. The difficulty investors had was not with the year-over-year results, but most likely with the quarter-over-quarter results. EPS for the second quarter was $6.52, a drop from $6.72 the previous quarter.

Revenue was 73.17 million for the second quarter, and revenue for the third quarter was only fractionally higher at $73.48 million.

A probable cause for the drop in stock price was the drop in oil prices. The WTI oil price reached $76.80 on October 3rd. As of November 29th, the price was $50.36, a 34.4% drop. More importantly, $50 per barrel has been estimated as the break-even point for fracking. Even if the costs are closer to $30 per barrel, oil and gas companies are less likely to explore and drill at $50 per barrel. The drop in oil prices has been attributed to a global stock market sell-off and signs of record output from Saudi Arabia.

A third reason for the drop in stock price is the now well-known fact that infrastructure in the Permian Basin is not adequate for the supply. Pipelines under construction will not be finished in 2018. As I wrote following the second-quarter report, “The pipeline capacity constraints may continue to hinder growth through the remainder of 2018.” Hindered growth would possibly result in a drop in earnings and a corresponding drop in stock price.

The Shifting Narrative of Oil, Water, and Land

In Houston, the U.S. oil capital, shale executives are trying out different superlatives to describe what’s coming. “Tsunami,’’ they call it. A “flooding of Biblical proportions’’ and “onslaught of supply’’ are phrases that get tossed around. (Bloomberg)

Hyperbole aside, the supply of oil is widely expected to increase dramatically when the pipelines come online. Executives were reportedly expecting production to flatline for the remainder of 2018 and throughout 2019, but now they are expecting the bottleneck to ease in the second or third quarter of 2019. Executives were also expecting well completions to accelerate again in the second half of 2019. They further expect that the U.S. will become a net oil exporter, even if for just a week, an event that has not occurred for 75 years.

However, one issue has to do with the Law of Supply and Demand. When I was a kid, the neighbor had a bumper crop of wheat. “That’s great,” I said. “Not really,” the neighbor’s son said. All the other farmers had a bumper crop, too. The demand remained the same, but supply increased. Little could be done with the extra wheat, resulting in a drop in wheat prices. Likewise, a “tsunami” carrying an “onslaught of supply” of gas and oil has the potential of forcing oil and gas prices down. The extra supply will be beneficial only if it is greater than the reduction in price.

The expected extra supply puts one of the world’s other major oil exporters, Saudi Arabia, in a bind. “The petroleum sector accounts for roughly 87% of budget revenues, 42% of GDP, and 90% of export earnings” (Forbes). Saudi Arabia’s Prince Alwaleed Bin Talal said more than five years ago that fracking was a competitive threat to oil-producing countries, and that oil producing countries would need to address the issue to survive (Sky News, CNSNews.com, and others). This was years before Apache announced its discovery in the Permian Basin. Saudi Arabia and other oil-exporting countries are certainly aware of the Permian and the new Texas pipelines, just as Prince Talal was aware of disruptive technology in 2013. These countries can be expected to do what they can to squeeze as much revenue as possible from their primary export before the Texas pipelines are finished and extra supply floods the market. $70 oil may not be seen again for some time.

A short-term issue with the bull thesis has to do with the time the market has to wait before the pipelines begin to arrive. Oil and gas production likely will not increase over the next three quarters, and as shown above, oil prices have dropped considerably since the beginning of October. Oil and gas royalties still make up nearly a third of the Trust’s revenue.

The water business is new and growing; it already contributes 18.1% of the revenue. How long can the growth continue? The Permian Basin Oil & Gas Magazine reported last May that producers are able to satisfy most drilling requirements with local uses of water. “That and the influx of water treatment companies have made the market ‘brutally competitive.’” The Trust has managed to thrive in that competitive environment to date, but it may not have a large moat.

While I was writing this article, the Trust filed an 8-K reporting the sale of 14,000 surface acres of land for $100 million. The Trust’s stated intention for the proceeds is “to acquire like kind properties”. Investors are currently buzzing with speculation about who bought the land, and what land the Trust intends to acquire with the funds. More than one investor has commented that the deal looks like a land swap, and another is guessing it will be used to buy contiguous land for a pipeline, but nothing definite is known at this time. Investors nevertheless pushed the price up 6%.

The market appears to be valuing the Trust based more and more on quarterly cash flows than on projected growth. This can be seen in the P/E, but first a word about the P/E: Not much more than a year ago, some readers of an article I wrote commented that the P/E was an inadequate indicator of the Trust, due to the promise of millions of oil in the ground. Just a year ago, I noted that investors had shown a reluctance to buy the stock when the P/E hovered in the mid-60 range. Investors still treated the Trust as a growth play, but I noted they were not buying at any price. Today, the P/E stands at 28.1 (BigCharts.com). This is contrast to a P/E for growth plays such as 94.3 for Amazon (AMZN) or 40.0 for Mastercard (MA). 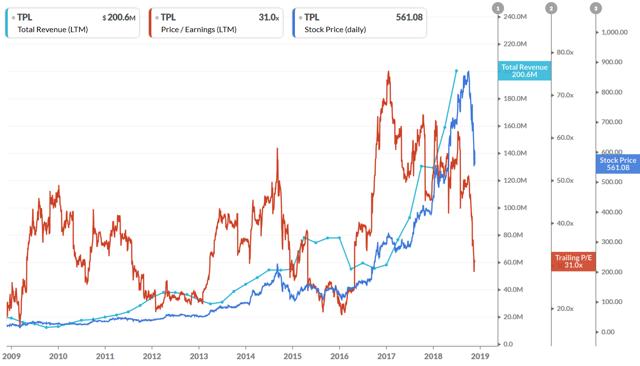 Other metrics are difficult because the Trust values the land at zero cost. The Trust passively collects royalties from producers, pipelines, and ranchers. Except for the water business, they do not have any control over production.

Given a 35% drop in the oil price, revenue from royalties could drop by $10 million. In contrast, if the water business again increases by 16%, revenues will increase by $2.9 million. The Trust states that income from easements and sundry income is unpredictable, and so no prediction is made here. Income from land is even more unpredictable. The $100 million from the recent land sale will be used to purchase land, so that is not factored into calculations.

A drop in royalty revenues of $10 million offset by a project gain of $2.9 million in water revenues results in a drop of $7.1 million. Given that revenue for the last quarter was $73.48 million, I estimate a decline of approximately 10% in revenue for the fourth quarter, resulting in $67 million of revenue, not including the $100 million land sale.

Projecting a stock price remains quite speculative. Given the increased focus investors have on cash flow and the projected fall in revenues, I do not expect the stock price to rise much from its current point. On the other hand, the pipelines are coming. Management is proactive. The Trust will continue buying back shares, per its charter. Management is doing something interesting with selling and buying land. The Trust remains a favorite among far-sighted investors. All these factors will keep the stock from sinking too far. Taking into account both the short-term bears and the long-term bulls, I project the stock to move sideways in a channel between $500 and $600 per sub-share (the Trust’s unique name for “shares”) for the next two quarters.

Revenues for the next quarter are projected to drop. A corresponding drop in stock price is entirely possible, but long-term investors will likely use any opportunity to buy shares. The Trust will continue to buy back shares as well. Therefore, barring any catalyst, I am looking for the stock to trade in a range of $500 to $600 for the next two quarters. Traders could well find some nice opportunities in that price range. Should management have another surprise announcement, the stock could well soar again far beyond that range.

Steven Miller
1.06K Followers
The companies I invest in typically have high returns and exceptionally strong balance sheets. They usually have little or no debt, regularly increase dividend payments, and have years of earnings growth. I invest in both domestic and international stocks across a variety of sectors. Positions are taken based on technical factors.
Follow

Disclosure: I am/we are long TPL. I wrote this article myself, and it expresses my own opinions. I am not receiving compensation for it (other than from Seeking Alpha). I have no business relationship with any company whose stock is mentioned in this article.