2019 will be a difficult year for China in terms of economic growth and the increasingly tricky political relationships with its trading partners.

An escalation in trade tensions is the key risk to China in 2019 - and this seems like the most probable scenario. This will hurt exporters, manufacturing and logistics services, therefore slowing economic growth directly.

Indirectly, the bilateral trade conflict between China and the US has resulted in multilateral trade and investment disputes. This is exacerbated by international voices blaming the Belt and Road Initiative as a debt pile-up exercise for poorer economies. It has become more difficult to maintain existing relationships with trade and investment partners. The recent APEC meeting showed these economies having difficulties positioning themselves between China and the US.

This moderate slowdown in growth reflects our projection of fiscal stimulus worth between CNY 9-10 trillion from late 2018 to 2020, averaging about CNY 4 trillion each year. The size of this stimulus is comparable with that of 2009-2011's CNY 4 trillion, taking into account that nominal GDP has grown by 2.3 times between 2009 and 2018 to CNY88.6 trillion (rolling four quarters to 3Q18).

Manufacturing PMI approaching 50 and below 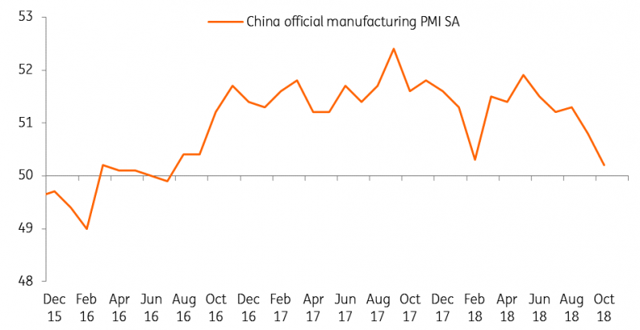 This fiscal boost will take the form of tax cuts (salary tax cuts and more export tax rebates), creation of capital pools for advanced technology R&D, the creation of liquidity pools for small private companies, and infrastructure projects. We'd emphasise that fiscal spending on infrastructure projects may not reflect the same scale of increase in fixed-asset investments. This is because some of the money will be used for repayment of debt from local government financial vehicles (LGFVs) that finance infrastructure investments. Put simply, fiscal money spent will not result in a proportional increase in GDP. This also reflects the fact that the debt problem in China has yet to be solved.

We expect monetary policy to provide support to the economy, mainly to small private firms. Liquidity injections via cuts in the reserve requirement ratio (RRR) are necessary to keep private firms running. Again, some of this money will be used for debt repayments. To lower the interest burden when risk premiums should be rising, we expect the central bank (PBoC) to also cut its seven-day reverse repo policy rate twice (in 1Q19 and 3Q19).

Infrastructure investments have increased in Oct 18 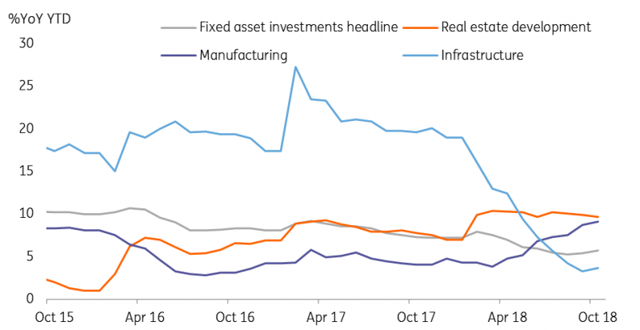 Housing market restrictions will be relaxed to support growth

USD/CNH crossing the 7.0 handle is a high probability scenario

Unlikely scenario: Resolution to trade conflict, what would happen?

In the unlikely event that China and the US agree to withdraw tariffs altogether, the Chinese government would focus again on reducing the economy's debt pile. This could prove just as difficult as facing a trade war. The deleveraging reform has been shelved since the middle of 2018 because the government has had to focus on combating the trade dispute. Within these few months, debt has piled up quickly within local governments, and LGFVs have made a comeback. It would take another few years (just like 2016 to mid-2018) to reduce debts of LGFVs, not to mention state-owned and privately-owned enterprises that receive liquidity for survival. In this scenario, GDP growth would be around 6.5%, depending on how fast the government wants to clean up debts. If the trade conflict were to end, the yuan would likely appreciate against the dollar to 6.50 by the end of 2019.

ING Economic and Financial Analysis
2.23K Followers
From Trump to trade, FX to Brexit, ING’s global economists have it covered. Go to ING.com/THINK to stay a step ahead. We’re sorry we can’t reply to individuals' comments.Content disclaimer: The information in the publication is not an investment recommendation and it is not investment, legal or tax advice or an offer or solicitation to purchase or sell any financial instrument.This publication has been prepared by ING solely for information purposes without regard to any particular user's investment objectives, financial situation, or means. For our full disclaimer please click here.
Follow
8 Comments