“But as we cannot predict such external influences very well, the only reliable crystal ball is a probabilistic one.” - Benoit Mandelbrot

C-J is a Monte Carlo simulation model used to assess risk in the S&P 500. Traditional stock market models suffer from a number of problems including fat tails, serial correlation, and the failure to account for volatility clustering. The fat-tail problem arises because traditional finance theory uses the normal distribution. For investors, the practical implication of such an approach is that traditional finance theory underestimates (and in some cases significantly underestimates) risk in the market.

C-J uses data on valuation, earnings, and short-term historical patterns in the stock market to correct for the problems noted above. C-J does this by using a series of non-normal conditional distributions. If you have read former Yale mathematician Benoit Mandelbrot’s book (with Richard Hudson), The (Mis)behavior of Markets: A Fractal View of Financial Turbulence, then you should note that C-J is fractal by design. And while the model maintains a fractal nature, because of its design it also maintains statistical properties similar to the behavior of the S&P 500 over the last 60+ years.

The purpose of C-J is not to provide a single point estimate of where the S&P 500 will be at some future point. As investors we don’t see the underlying process generating movements in the market, we only see the outcomes, thus explaining why “expert” predictions are often wrong. As Nassim Taleb has written in Black Swan, “Most models, of course, attempt to be precisely predictive, and not just descriptive in nature. I find this infuriating”. To that end, C-J is intended to be descriptive in nature by providing not only a model that corrects for the problems discussed above, but does so in a probabilistic manner.

In my November article, I noted that C-J simulations suggested a 54 percent chance that the S&P 500 Index would end the month of November either up 5 percent or more or down 5 percent or more. The phrase I used then was volatility begets volatility. With that being said, the Index, which closed October at 2711.74, ended up 1.8 percent for the month, with the S&P closing November at 2760.17. And while a 1.8 percent gain suggests a less than volatile month, November was anything but quiet.

After closing October at 2711.74, the market hit a high of 2815.15 (+3.8%) on November 7. Over the next two plus weeks it then dropped to a low of 2631.09 (-6.5%), thereby putting the market not only in correction territory, but also putting the S&P 500 Index in negative territory for the year. With that said the market undertook a strong rally closing the month at 2760.17. In fact, the S&P 500 closed November with one of its best weeks in a number of years as it rose 4.8% in the final week. So I was curious what the Index would look like in December; here are C-J’s simulation results: 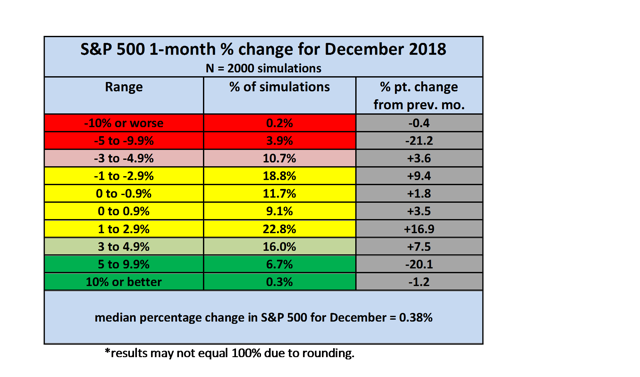 The table above provides some interesting results compared to the November simulations. First, as can be seen in the third column, there is a dramatic shift in the estimated probabilities and away from tail events, both positive and negative. In fact, the estimated probability of a loss of 5 percent or more is down 21.6 percentage points from November while the estimated probability of a gain of 5 percent or more is down 21.3 percentage points. With that said, the results suggest only a 54.8% likelihood that the S&P 500 will increase during December. That is below the historical likelihood of the Index going up in a month. In fact, the median simulation calls for an increase of only 0.38% for December, a result that would have the S&P 500 end December at 2770.66. Interestingly enough, that is almost identical to the median year-end simulation result C-J made at the very beginning of November (see my November 3 article).

Second, and equally interesting, despite the fact that the last week of November saw the S&P 500 experience one of its best weeks in years, C-J suggests that result is unlikely to carry through until the end of December. With regard to relevant yardsticks, C-J estimates only a 2.8% chance the Index will end the year above the record high of 2940.91 established on September 21. On the other end, C-J now estimates a 12.45% chance the Index will end 2018 below the 2017 year-end close of 2673.61.

Given the underestimation of negative tail risk in traditional financial theory, I break out the negative tail estimates in more detail. And while C-J does not use the normal distribution, I include the -11.74% or worse category in the table below as it corresponds to 3 standard deviations below the average monthly percentage change. Broken out into more detail, the December negative tail results can be seen as:

Confirming what we saw in the first table, the results suggest a dramatic decline in the likelihood of a decline in the S&P 500 Index by 5% or more. Furthermore, you should note that in all but one case, the estimated probability of a loss in a given range is lower for December than the historical rate of occurrence and the rate implied by traditional finance theory. The exception is the likelihood of a loss in the -9% to -11.74% range where the estimated probability is .02 percentage points higher than the rate implied by traditional finance.

Disclaimer: This article contains model-based projections that are forward-looking and, as with any quantitative model, are subject to uncertainties and modeling assumptions. The C-J model is intended as a tool to assess risk in the S&P 500, and not as a forecast of the future value of the S&P 500 or any other market. The results of C-J are for informational purposes only. Nothing in this article should be construed as specific investment advice.

Kevin Jacques
1.51K Followers
Kevin T. Jacques is a former senior economist with the U.S. Treasury Department in Washington, D.C. During his 14 years with the Treasury Department, he worked on topics including risk measurement and management systems, bank capital regulations, and systemic risk. In the mid-1990's, he served as staff on the President's Working Group in Financial Markets examining systemic risk in the U.S. financial system. In addition, during his time in Washington, Dr. Jacques taught finance in the McDonough School of Business at Georgetown University. Dr. Jacques’ economic and financial commentaries have received hundreds of radio, television and newspaper citations including Bloomberg Financial News, National Public Radio (NPR), PBS television, American Banker, U.S. News & World Report, and others. Currently, he teaches investments at Baldwin Wallace University. He holds a Ph.D. in Economics from Michigan State University.
Follow