I am sure that there are dozens of posts up today in the economic and financial media about the yield curve inversion that happened yesterday. Just to document the atrocity, here is CNBC's yield chart from 5:30 PM ET, showing both an inversion at both the 3 to 5 year and 2 to 5 year timeframes: 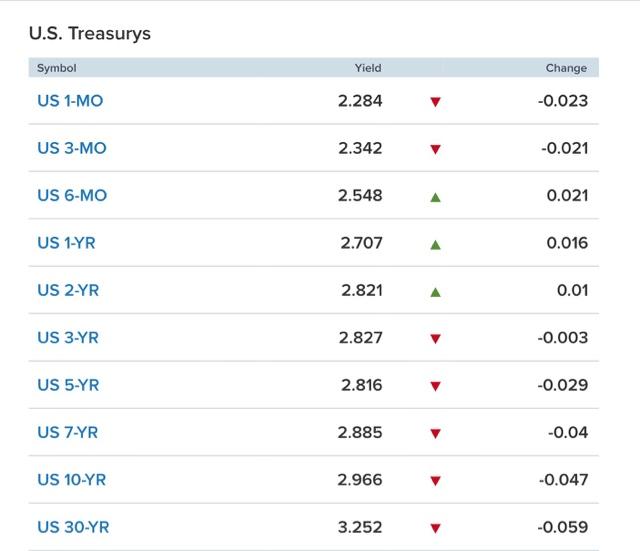 A look at the history

Most of the commentary you have read probably boils down to an assertion that this is bad (it is) and that a recession is now likely in the next 12 to 24 months (maybe). But let's go to the graphs, and then step back a second for a little consideration.

Next, here is a close-up of 1998, which I'll discuss in more detail below:

Finally, here is the spread between the 10 and 30 year Treasuries over the same 40 year time frame:

So let's note a few things:

In other words, as the saying goes, "the camel's nose is in the tent." If you're not familiar with the saying, it means that the rest of the camel is likely to soon follow, with bad consequences for the people in the tent.

BUT, consider the following:

1. Several times - at the end of 1994 and the beginning of 1998 -- an inversion only happened for one day or even only intraday. Not only did they not signal an oncoming recession but a reversal to a normal spread happened almost immediately. In other words, bond traders have agency, and as a whole (i.e., "the market") might decide that the move has gone on long enough.

2. The 10 to 30 year spread had a number of false positives. We don't have to worry about that for now.

In short, a one-day inversion over a limited portion of the bond yield curve, while more often than not heralding a full-on inversion and bad consequences to come, is by no means dispositive.

The Fed is an actor. The Fed has agency. The Fed can affect the future course of the bond market. The Fed can react to this news if it chooses, and thereby change the future.

If you've read me for any period of time, you know that I have been bullish on the economy since 2009. You also know that my array of long leading indicators has been deteriorating this year from positive, to weakly positive, to neutral 6 months ago, to negative for the last 3 weeks. Any sort of yield curve inversion just adds to the negativity.

But, to mix metaphors, the long leading indicators turning negative is like the Ghost of Christmas Future visiting Scrooge. Without more, they do not show what *must* be, only what will be if present trends continue, if actors with agency fail to find a correct course in time.