Nextera (NYSE:NEE) has a strong electricity portfolio. In its latest quarter the firm completed the acquisition of Florida City Gas, a natural gas distributor serving approximately 110,000 residential and commercial customers and added 1,417 MW of new renewable projects and 650 MW of repowering projects to backlog. Currently Nextera is waiting on FREC’s approval on its proposed acquisition of Gulf power which it expects to close in the first half of 2019 (if everything goes well). If approved, Nextera will gain 450,000 electricity customers from Gulf Power. Nextera’s current initiatives also include Okeechobee Clean center with 1,750 megawatt capacity and construction of four 74.5 megawatt solar energy centers. Besides enhancing production capabilities, Nextera is continuing its project of yielding several $100 million in run rate efficiencies. Combining all the efforts, I think Nextera can economically achieve its midpoint target of $7.70 in adjusted EPS for 2018 fiscal year and 12%-14% growth in dividends per share through 2020. 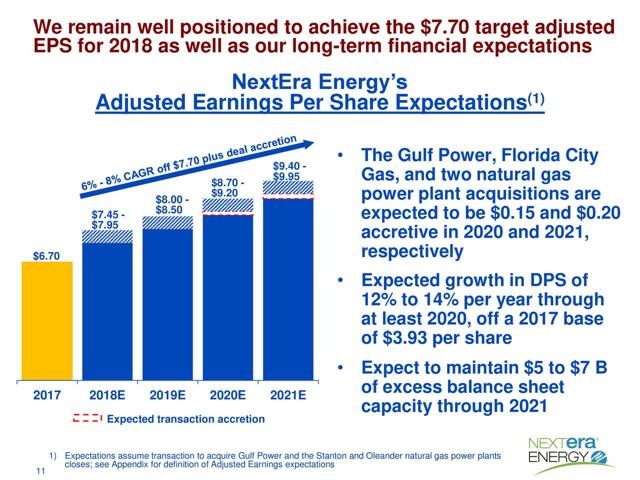 Previously Nextera’s $4.3 bid for Hawaiian Electric and $18.7 billion bid for Texas utlity Oncor couldn’t receive regulatory approval. So far NEE’s current bid of $6.5 billion for Gulf Power hasn’t been problematic as indicated by FTC’s early termination of the waiting period and currently uncontested position in change of control proceedings with the FERC. Also note that NEE’s proposal involves home state now which wasn’t the case for Hawaiian and Texas, and this could give it some advantage. I think Nextera can close this deal within reasonable time. In its latest quarter the firm added nearly 2,100 megawatts to its backlog, including approximately 650 megawatts of additional wind repowering opportunities and 120 megawatts of battery storage projects. All these initiatives indicate that NEE stands at a strong point, and combining its operational success with its nice payouts, it definitely deserves the attention. The firm reports that approximately one-third of its solar projects that have been added to backlog include a battery storage component and it continues to include a storage alternative in all of its RFP responses. All these initiatives indicate that Nextera’s moat is increasing, and combining it with its payouts, it deserves the attention it gets. 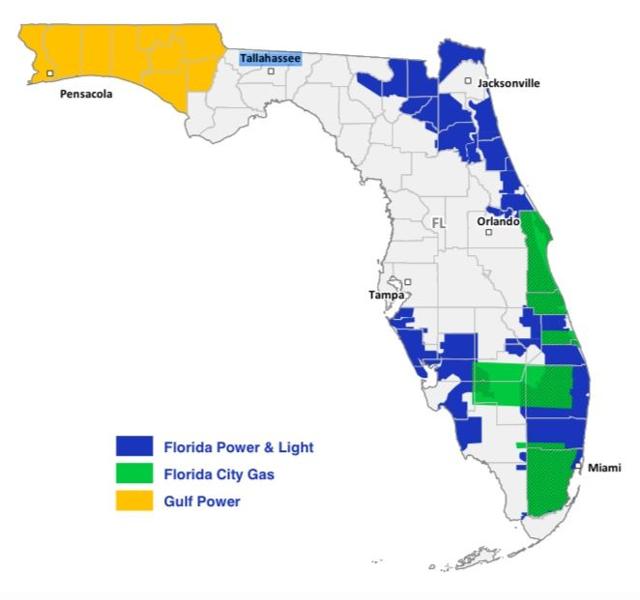 Nextera has posted 46.95% in average gross margin for last six years along with 29.85% in average gross margin and 17.58% profit margin. FCF margin averaged 8.88% in the same period. In its latest quarter, adjusted earnings per share increased by $0.33 or approximately 18% against the prior year quarter due to and achieved its target regulatory ROE of 11.6%. Nextera expects 6%-8% cagr on EPS from 2018-2021.

Currently Nextera’s downgrade threshold is not very far from actual performance. Furthermore, Nextera’s plan to finance Gulf power’s proposed acquisition by issuing $5.1 billion in new debt and assuming $1.4 billion of Gulf Power's debt could make things a bit complicated, but Nextera’s economic moat and accretive strategy has proven to be successful for its bottom lines and payouts and does give it some cushion. 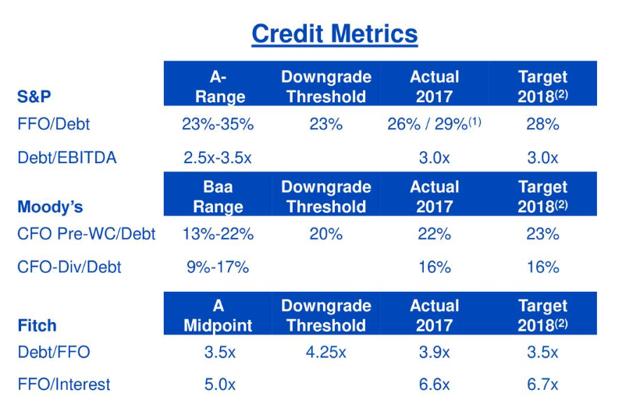 Florida is one of the fastest growing states in U.S. with a rising GDP and declining unemployment rates. The state is typically ranked second (after Texas) in terms of net electricity generation and third (after Texas and California) in terms of electricity consumption. Florida’s electricity consumption in terms of coal sources averaged 3.19% of total coal-generated electricity in U.S. and 22.8% in terms of natural gas sources for last two years. Average increase in Florida’s consumption as percentage of total U.S. consumption was 40 bps on an annual basis which indicates that the state’s share in total consumption is increasing. The consumption pie is dominated by transportation use (35.7%), followed by residential use (28.6%), commercial use (23.9%) and industrial use (11.6%). Florida has the highest average temperature in U.S., 19 out of 20 homes in Florida uses air conditioning. GDP-wise Florida ranks fourth along with improving employment situation. 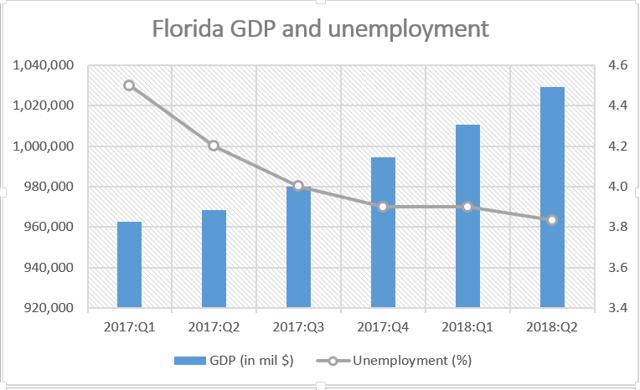 Nextera’s dividends featured 10.37% in 5y average growth rate and followed 23 years in dividend growth. Current payout stands at 57.31% while 5y average sits at roughly 50%. Although yields are not very high compared to the peer, its relative lower payouts does leave it more at hand for capex and expansion.

Nextera has demonstrated solid business for a good period of time. Investors received respectable payouts while price more than doubled in last five years. Currently the firm has multiple initiatives on run, and given its wide economic moat and accretive growth, Nextera is a buy.

Abrar Hassan Saadi
654 Followers
I always try to strike a fine balance between quantitative and qualitative factors and take a holistic approach in my research. My articles contain my opinions, they are not investment advice.
Follow