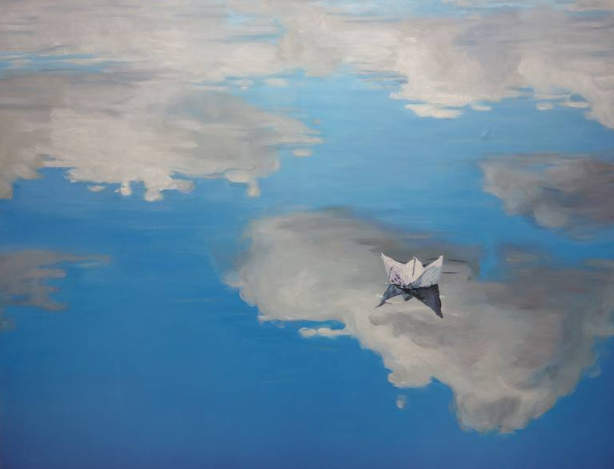 Welcome to my Gold Weekly.

In this report, I wish to discuss mainly my views about the gold market through the World Gold Shares SPDR Gold Minishares Trust ETF (NYSEARCA:GLDM). GLDM is directly impacted by the vagaries of gold spot prices because the fund physically holds gold bars in a London vault in the custody of HSBC bank.

To do so, I analyse the recent changes in speculative positions on the Comex (based on the CFTC) and ETF holdings (based on Fastmarkets' estimates) in a bid to draw some interpretations about investor and speculator behavior. Then, I discuss my global macro view and the implications for monetary demand for gold. I conclude the report by sharing my trading positioning.

Speculative positions on the Comex

The CFTC statistics are public and free. The CFTC publishes its Commitment of Traders report (OTC:COTR) every Friday, which covers data from the week ending the previous Tuesday. In this COTR, I analyze the speculative positioning, that is, the positions held by the speculative community, called "non-commercials" in the legacy COTR, which tracks data from 1986.

As a result, the impact on gold spot prices tends to be relatively more important and volatile, which, in turn, affect the value of GLDM because the latter physically holds the metal in vaults in London and, therefore, have a direct exposure to spot gold prices.

Gold is off to a positive start to the week on account of a weaker dollar (UUP) following the trade war truce agreed by the US and China at the conclusion of the G-20 meeting last weekend.

The recent dovish turn of the Fed and the renewed weakness in the dollar against most EM currencies produce a favorable environment for gold prices.

With most market participants positioned negatively on the gold market, the likelihood of a strong short-covering by year-end is elevated, in my view.

I am bullish GLDM to play the appreciation in gold prices. 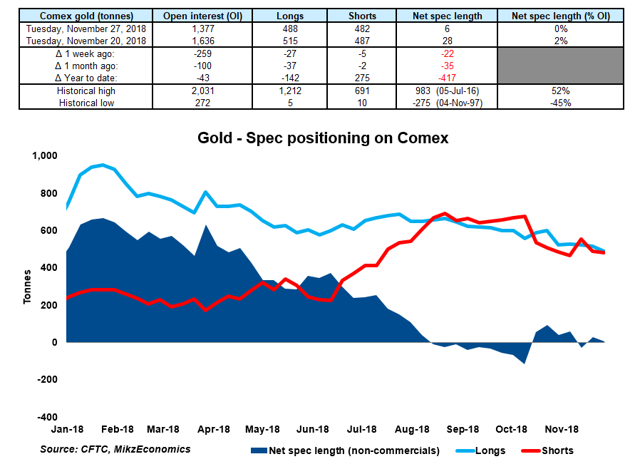 According to the latest Commitment of Traders report (COTR) provided by the CFTC, non-commercials slashed their net long position in Comex gold in the week to November 27.

Clearly, speculative sentiment toward Comex gold remains extremely weak. However, the recent rebound in Comex gold prices suggests that the speculative community has turned more constructive on the yellow metal.

From a historical viewpoint, it is clear that the current net spec length is too low and, therefore, warrants a normalization. This means a strong bout of speculative buying in favor of Comex gold is due, pushing Comex gold spot prices higher.

Bottom line: While it is hard to predict with exactitude the forthcoming normalization of gold’s spec positioning, I am reasonably confident to hold that the net spec length should grow in the next 6 months, which will exert upward pressure on Comex gold spot prices. In turn, the value of the World Gold Shares SPDR Gold Minishares Trust ETF (GLDM) will increase. 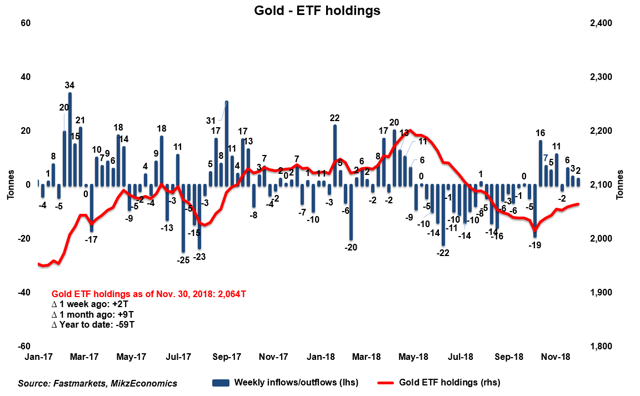 ETF investors lifted their gold holdings in the week to November 30, according to Fastmarkets.

Gold ETF holdings rose a small 2 tonnes over November 23-30. This marked a sixth time of inflows over the past 7 weeks. Interestingly, GLD experienced some outflows of around 1 tonne over the period.

Investor appetite for gold has gradually slowed over the past few weeks.

Contradictory macro forces are at play. On one hand, global risk-taking appetite has recovered, prompting investors to reduce their demand for haven assets like gold. On the other, the dollar has come under renewed downward weakness, boosting investor demand for the yellow metal. 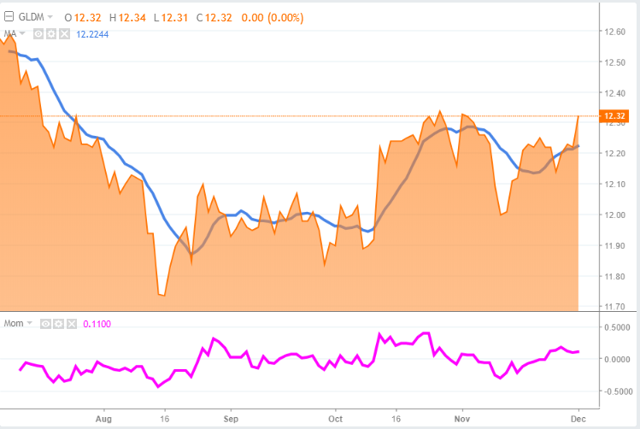 GLDM’s technical indicators are bullish, thereby pointing to further strength in near term. The momentum indicator is in positive territory, and GLDM is above its stable 20 daily moving average. This suggests a positive swing in sentiment.

If GLDM manages to make a higher high and reach $12.34 per share, GLDM could enjoy a fast and furious rally into the year-end.

Bottom line: The risk-reward is betting for holding a long position in the long term. Ergo, I am bullish GLDM.

GLDM is directly impacted by the vagaries of gold spot prices because the fund physically holds gold bars in a London vault and custodied by HSBC Bank. The investment objective of the fund is to replicate the performance of the price of gold, less trust expenses (0.18%), according to GLDM's factsheet.

The physically-backed methodology prevents investors from getting hurt by the contango structure of the gold market, contrary to ETFs using futures contracts.

Secure: The shares represent fractional, undivided interests in the Trust, the sole assets of which are physical gold bullion and, from time to time, cash.

Cost Effective: The ETF allows investors to buy gold at a much lower cost than if they had to purchase, store and insure their physical gold by themselves.

Dear friends, if you enjoy reading my research, thank you for showing your support by clicking the "Follow" orange button beside my name on the top of the page and sharing/liking this article. I look forward to reading your comments below.

Orchid Research
5.59K Followers
Orchid Research focuses mostly on commodity and macro analysis, with a particular emphasis on the metals markets and China. We conduct research on supply and demand trends across commodities. We also analyse global macro dynamics and their reflexive interactions with the commodity complex. With 10+ years of experience in macro and commodity research, Orchid Research seeks not only to deliver unbiased views and accurate forecasts, but also to identify trade opportunities generating α.
Follow

Disclosure: I am/we are long BAR. I wrote this article myself, and it expresses my own opinions. I am not receiving compensation for it (other than from Seeking Alpha). I have no business relationship with any company whose stock is mentioned in this article.