The G20 meeting on the weekend produced a mildly surprising rapprochement between the U.S. and China on trade. Most commentators regard the Administration’s serial imposition of tariffs negatively. Stocks certainly liked the possibility of a lower temperature around this rhetoric.

In spite of the U.S.’s many trade disputes, the economy shows little sign of suffering. Unemployment is 3.7% and interest rates remain supportive, with ten year treasury yields at 3% offering scant competition for equities (see Bonds Still Can’t Compete With Stocks). Consensus expectations are that next year S&P500 earnings will increase by 10%.

Nonetheless, tariffs do have an impact. Steel shipments have been a controversial topic, with many developed countries accusing China of selling below cost (“dumping”). The Administration has imposed tariffs on steel imports from a wide range of countries, on the grounds of national security. Commerce Security Wilbur Ross said, “Economic security is military security. And without economic security, you can’t have military security,”

Tariffs have their effect in subtle ways. They are a form of sales tax, and taxes are borne both by the producer and the customer in proportions determined by their relative elasticities. For example, if a buyer of a product now subject to tariffs had no alternatives available and had to have the product, the price would go up by the amount of the tariff. The more choices a buyer has, the less impact the tariff has on the product’s price, meaning more is absorbed by the producer. 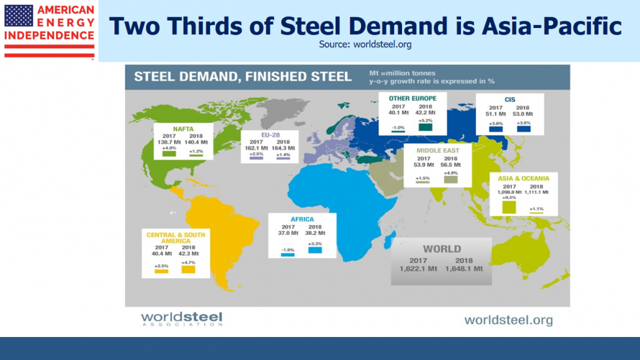 The Federal Reserve Bank of St. Louis shows that steel prices have risen by around 17% since the 2016 election, the point at which steel buyers and sellers might have begun to contemplate tariffs. The tariffs ultimately implemented were 25%, which suggests that buyers have borne more of the cost than producers. Domestic producers were able to raise prices protected by tariffs. Since the 17% increase relates to all steel whereas the tariffs were only imposed on imports, producers benefitted further at the expense of buyers. The Bureau of Labor Statistics forecast that steel prices would rise by 21%, so further price hikes may be ahead. 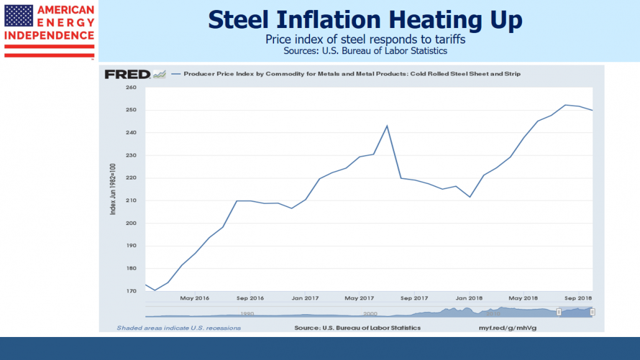 Few of us buy steel directly so the impact appears inconsequential. A recent report by CoreLogic, who advise the insurance industry on construction costs, showed steel prices rising at 14% year-on-year. Property and casualty companies will factor this in to the cost of insurance coverage for buildings that use steel – excluding one-to-four family houses, most other structures require it. So apartment dwellers and office building owners will see an incremental cost increase through insurance premiums higher than they would otherwise be. 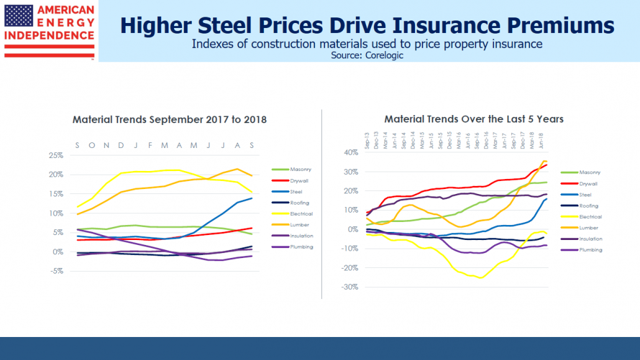 Another example relates to energy infrastructure. Plains All American (PAGP) was inadvertently caught up in the tariffs because of specialty steel they had ordered from Greece to complete their Cactus II crude oil pipeline. In effect it was a retroactive tariff, because they’d placed the order long before the imposed tariffs resulted in a $40MM charge. Their appeal for a waiver was denied.

Capacity on the pipeline was fully committed by February, before the tariffs were formally announced. The increased cost of the pipeline will be borne by shippers, to the extent contracts allow the tariff to be passed on, and the excess by PAGP stockholders.

In both cases the tariffs represent a redistribution of income, from customers to the Federal government (which is why it’s a tax) and to domestic steel producers through higher prices. The effects are both subtle and numerous, as these examples show. The Administration has defended tariffs as a short-term, negotiating tool and not part of a long-term strategy. Whatever the merits of tariffs on domestic politics, equity markets clearly look forward to the time when the goals of tariffs have been achieved.

Disclosure: I am/we are long PAGP. I wrote this article myself, and it expresses my own opinions. I am not receiving compensation for it. I have no business relationship with any company whose stock is mentioned in this article.

Additional disclosure: SL Advisors is the sub-advisor to the Catalyst MLP & Infrastructure Fund. To learn more about the Fund, please go to https://catalystmf.com/funds/catalyst-mlp-infrastructure-fund/.

SL Advisors is also the advisor to an ETF (USAIETF.com).