Author's note: December 7, 2018, 8:45 a.m.: EUR/USD conversions have been corrected from the original version, where they had been incorrectly calculated.

Vienna Insurance Group (OTCPK:OTCPK:VNRFY) is primarily traded on the Vienna Stock Exchange under the ticker VIG:AV. I will be referring to the Austrian symbol for the article. Amounts are in euro (€) unless mentioned otherwise. EUR-USD 1.330. Price of 1 euro in USD as of November 30, 2018. Furthermore, most of the figures are based on the financial reports of Vienna.

On 28th of November, Vienna Insurance released its Q3 2018 results. Affected adversely by the fluctuations related to the non-controlling interests, the company recorded a declining post-tax profit, while the operating profit before the non-controlling interests was higher than last year for the first nine months of the year. The combined ratio improved by 1.0 percentage point to 96.3%, and the gross written premiums grew by 2.9% to €7.4 billion ($9.8 billion). The company continued to opt out of the single life business and to focus its commercial expansion on the health, non-life and regular life insurance businesses.

Furthermore, the insurer confirmed its 2018 targets, with a premium volume of 9.5 billion ($12.6 billion) and a pre-tax profit of €450-€470 million ($598-$625 million). Implicitly, the insurance company confirmed as well its intention to increase its dividend, as the firm would have the financial flexibility to raise it without deteriorating its capital adequacy. In my opinion, the dividend per share will be increased to €1.0 ($1.33), or an 11% year-to-year growth. Furthermore, on a mid-term horizon, the company will have the capacities to increase the dividend distributed to the shareholders, thanks to a portfolio expansion combined with high underwriting standards. Even if the company will undoubtedly not become a worldwide giant like its European peers (e.g., AXA (OTCQX:AXAHF), Allianz (OTCPK:ALIZF) or Generali (OTCPK:ARZGF)), Vienna has a strong moat at a regional level and is willing to increase it by developing new products (like the assistance services or the health insurance products) and continuing acquiring small and mid-sized portfolios. A patient dividend investor, not focused on the market valuation, could be interested in this shareholder-friendly company, well implemented in Eastern Europe.

Well On Track To Reach The €9.5 Billion Premium Volume

The company reported a 2.9% increase in the gross written premiums, which reached €7.4 billion for the first nine months of 2018.

The premium growth was mainly driven by commercial development in the Czech Republic, Romania, the remaining CEE countries, Baltic States. Furthermore, the central functions contributed actively to the premium growth. 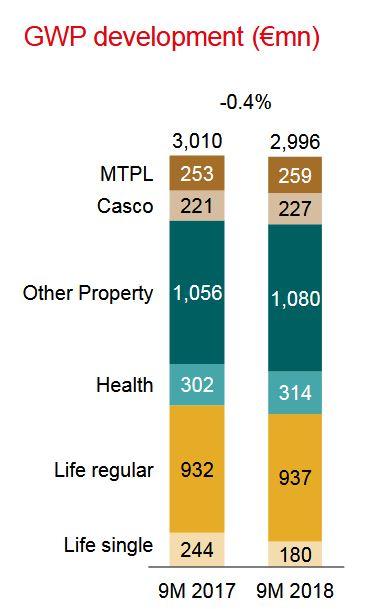 Adjusted for life single premium business, the premiums in Austria were up by 1.9%, primarily due to the commercial development of the P&C and health activities.

In the Czech Republic, the second-largest segment of the company, the gross premiums grew by 5.6%, driven by life regular premium business (+€35 million) and other property (+€22 million). Only the life single business recorded a premium decline of €10 million. 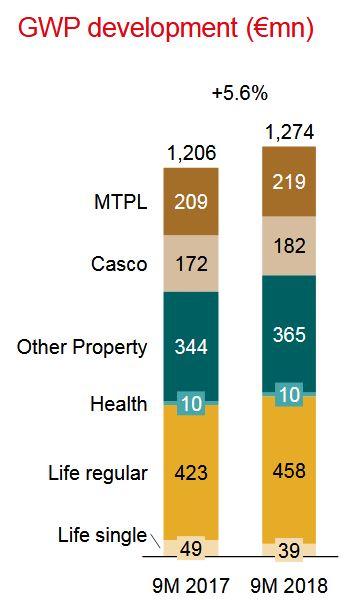 In Slovakia, the premium level was almost flat. Nonetheless, adjusted for life single premium business, the premiums were up by 3.8%, mostly because of the non-life insurance activities. 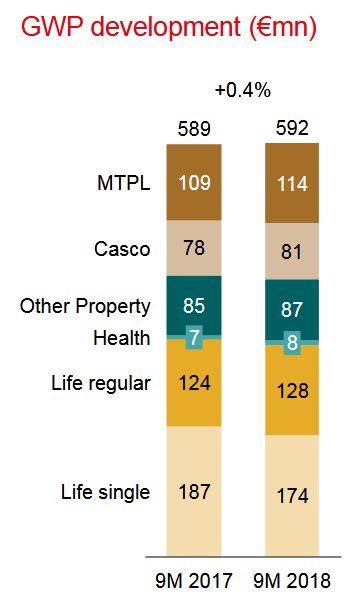 In Poland, the gross written premium declined by 1% to €669 million ($890 million). The drop was due to the decline in the premiums of the single life business. Adjusted for life-single premium business, the premium growth amounted 11.1% and was driven by the motor and property insurance businesses, which grew respectively by €45 million ($60 million) and €21 million ($21 million). 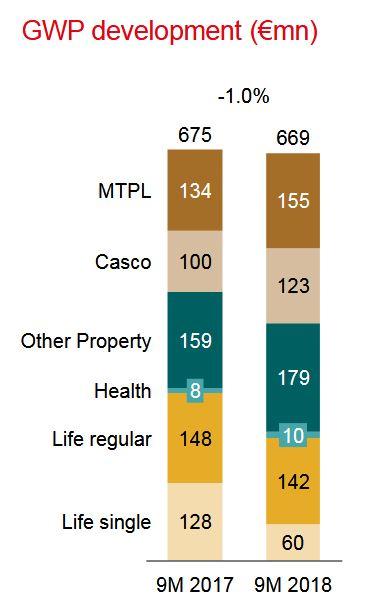 In the Baltic States, Vienna Insurance continued to record a double-digit premium growth at the overall level. The strong premium growth was observed in all lines of business. 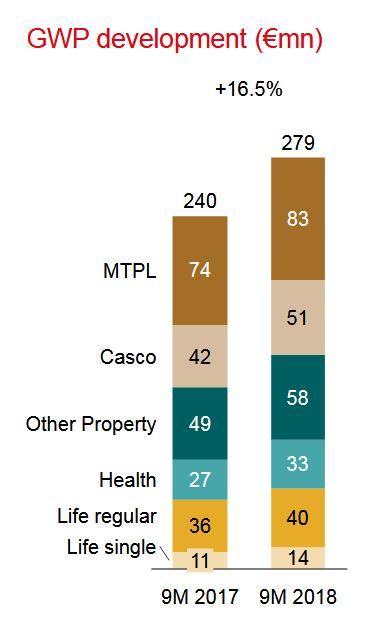 In other countries, the company recorded an increase in the top line as well. The premiums grew by 5.2% in Romania, by 11.2% in Hungary, by 8.4% in Bulgaria, and by 8.2% in the remaining CEE countries. In Germany and Liechtenstein, the gross written premiums rose by 1.2%, primarily driven by the other property and life businesses in Germany. Last but not least, the central functions contributed actively to the premium growth. The gross written premiums increased by 9.4% to €1.2 billion ($1.6 billion).

The commercial expansion was mainly the result of an increase in internal Group reinsurance premiums received by VIG Holding and an increase in premiums generated by the VIG Re, the reinsurance captive, entering new reinsurance business areas (Western Europe). In fact, the Western European reinsurance market has been identified as a potential source of growth. That's why VIG Re opened, in November 2018, a second branch in Paris (the first opened branch was in Frankfurt) to serve French-speaking customers in France, Belgium, and Luxembourg.

On the segment side, the premium growth was mostly due to the development of the non-life and health activities (+3.6% in the total non-life business and +8.9% in health insurance). The company continued to decrease its exposure on the single-premium life insurance products (a 16.7% year-to-year premium decline).

In my opinion, the company is well on track to reach the 2018 premium target, which has been confirmed by the insurer's management. With the integration of the newly acquired portfolio in the Baltic States and the upcoming integration of the Polish subsidiary of the German company Gothaer Finanzholding AG (please note that the purchase of the Polish portfolio remains subject to approval by the local authorities), the company continued to grow externally. Furthermore, by developing new products and services, the insurer decided as well to increase its market shares.

In a nutshell, Vienna Insurance will indeed record a premium volume of €9.5 billion (and possibly slightly more, in the case of a positive commercial momentum) for the 2018 exercise. If Vienna Insurance succeeds to maintain (or even improve) its underwriting margins, the company will prove that it is possible to combine commercial expansion with operating performance. 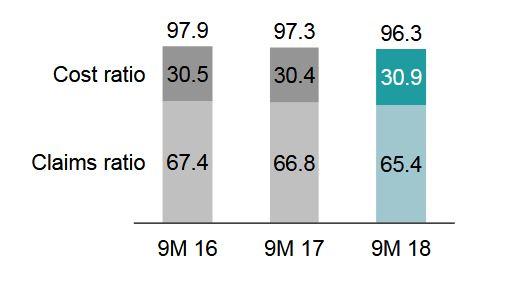 The improvement in the combined ratio at the group level was primarily driven by a better claims situation, resulting in an improved loss ratio. Nonetheless, the cost ratio deteriorated slightly by 0.5 percentage point to 30.9%.

In the countryside, the combined ratio improved almost everywhere, except in Romania, Slovakia, Bulgaria, and other markets. 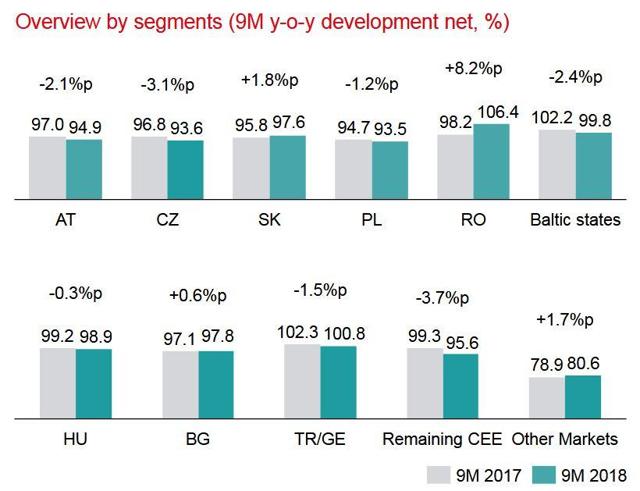 In Austria, the largest market of the insurer, the combined ratio improved by 2.1 percentage points thanks to both lower expense and claims ratios. The significant drop in the loss ratio was due to a positive claims development in motor and fire insurance segments. In the Czech Republic, the improvement in the underwriting margin was mostly due to a back-to-normal claims situation. In 2017, the Czech branch was adversely affected by major claims in the other property business. For the other countries, efforts were made as well to reduce as much as possible the combined ratio.

In my opinion, the 95% combined ratio target is an achievable goal on a mid-term horizon. Nonetheless, I would like to see more efforts on the operating costs to reduce as much as possible the cost ratio. I guess that Vienna Insurance intends to integrate as much as possible the newly purchased entities. Even if the insurer has made many small and mid-sized acquisitions over the years to reach a critical mass in some markets (e.g., in Poland, Baltic States, Romania), the strategy should be from now to restructure some branches to increase the underwriting margins. I know that the restructuring process is ongoing, with the structure simplifications done over the past quarters. However, I expect more efforts from the group to reduce as much as possible the cost ratio.

Undoubtedly, The Dividend Will Rise

Barring a catastrophe, the company will increase the yearly dividend. The dividend policy of the Austrian insurance group is the following: at least distributing 30% of the earnings to the shareholders. Before 2015, the dividend per share was increased by €0.10 per year. With the poor results recorded in 2015, the dividend was cut to preserve the financial flexibility of the company. From 2016, the dividend has been increased each year.

Regarding the current annualized metrics, in terms of earnings, RoE or book value per share, the company can increase its dividend. 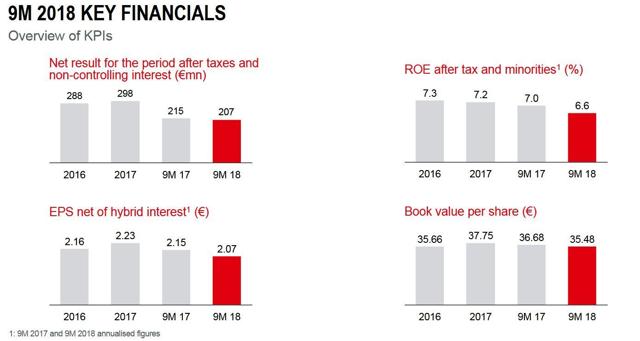 The company continued to suffer from the adverse impacts in Romania and precautionary measures (reserves strengthening) for Poland and Romania. Nonetheless, the post-tax profit before the non-controlling interests grew by 3.5% to €275.5 million ($366 million). The company benefited from the commercial development in the Eastern and Baltic countries, combined with an improvement in the underwriting margins in the largest markets like Austria and the Czech Republic. The group combined ratio improved by 1.0 percentage point to 96.3%. Furthermore, Vienna confirmed targets for 2018, with a gross written premium volume of €9.5 billion and a pre-tax profit in the range of €450-470 million ($598-$625 million). Depending on the impact of the non-controlling interests during the fourth quarter, the yearly post-tax profit after non-controlling interests should be in the range of €270-320 million ($359-426 million).

Moreover, the company should redistribute €128 million ($170 million) to its shareholders. In a nutshell, the expected dividend remains covered and sustainable on a mid-term horizon. Besides, the insurer will continue having the financial capacities to acquire small and mid-sized companies or to grow organically by developing new products.

I remain confident in the company's ability to combine portfolio growth with high underwriting standards. The insurer will certainly not compete with European insurance behemoths like AXA, Generali or Allianz. Nonetheless, at the regional level, Vienna Insurance Group remains the leader of the insurance market in the Eastern countries with a growing and strong moat.

Furthermore, with the decisions to focus on the health and non-life products and the assistance services, the insurer will become less sensitive to the interest rates, generate more predictable results and deliver a steadily increasing dividend to its shareholders.

Notes for readers: Interested in other analyses mainly focused on the insurance sector? Please do not hesitate to follow me by scrolling up and clicking on the "Follow" button next to my name to not miss my future articles. Thanks a lot for your support! Furthermore, I will be more than happy to discuss with you on my articles, the chosen assumptions for valuing companies' intrinsic value or anything else you consider as relevant.

The CrickAnt
833 Followers
Author of Cash Flow Club
The Investment Community where "Cash Flow is King"
Considering myself as Finance enthusiast, I'm investing on stocks since more than 3 years by using a value approach and by following famous Warren Buffett's piece of advice: "It's far better to buy a wonderful company at a fair price than a fair company at a wonderful price."

I am currently contributing articles to Darren McCammon's service Cash Flow Kingdom, "The place where Cash Flow is King".