Wheeeee - what a ride!

Down 800, up 700; what a fun day in the market. Now we're only down 750 from Monday's open so we can make that up by 11am, right? I certainly hope you have your hedges on as we literally could go 750 points either way off the Non-Farm Payroll Report at 8:30 this morning - especially if it shows more than 250,000 jobs created as that would mean the Fed really needs to raise rates before wages start eating into Corporate Profits and spur inflation. Even though wage inflation is "the good kind" that makes the economy stronger - the Fed doesn't really care about that. 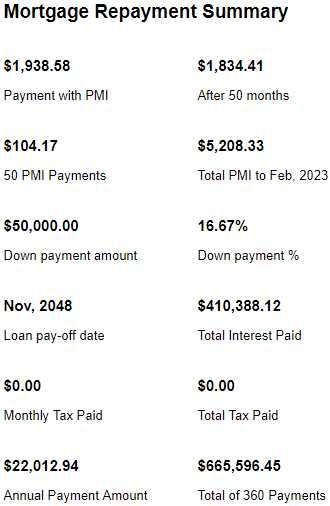 By the way, funny thing - did you know the U.S. Government has borrowed $21Tn on your behalf and, at 2.1% average interest, they have to pay $441Bn a year in interest payments alone and that Trump is already running a $1Tn annual deficit (when there is no war and no recession). The only reason the rates are so low is because we borrow mostly short-term notes that we constantly roll over - which then makes us subject to immediately be affected by rate increases - THAT is why Trump is freaking out about the Fed raising rates. He just doesn't want his budget to blow up.

The trade deal with China seems sabotaged by the kidnapping of the daughter of the head of China's biggest tech company. If the shoe were on the other foot, no matter what the charges, U.S. citizens would be outraged and demand action. Why do we think Chinese people will not? They are human beings, just like us. 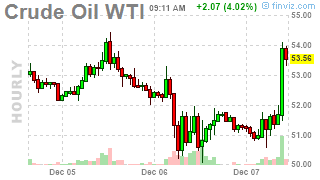 Also good news for the market that's bad for consumers - OPEC has agreed with Russia (OPEC+) to cut another 1.2Mb/d of production and that's sending oil back to $54 this morning, up $3,000 per contract from our call to go long at $51 yesterday. In fact, I reiterated the long call at $50 at 3:08 pm in that Comment Section - so good for gains of $4,000 per contract for the people who were more patient than we were with our first entry!

We'll be taking those quick gains off the table and relying on our short Ultra-Short Oil ETF (SCO) calls (shorting the short) to do their work for us. We originally sold the SCO Jan $20 calls on 11/14 for $4 and, as of yesterday's close they were $5.75 but we were confident that $50 would be a good floor so now we look for a bounce back over $20 so the short calls will expire worthless and we get to keep the $16,000 we sold 40 contracts for (they were part of a bullish spread we already cashed in as oil bottomed out).

So I still like that short sale as a new play or you can sell the July $25 calls for $6 because if oil is under $50 in July, I will eat my hat! That was going to be our fallback roll if oil didn't bounce but now it's bouncing so I'm very excited about this position as it's currently showing -$23,000 in our Short-Term Portfolio so, if they expire worthless, it will be a $23,000 gain in 42 days.

So lot's of fun things to trade but we won't be getting too excited until we see our bounce lines holding up and we're certainly not going to get all long into the weekend while we wait for the Chinese reaction to the Huawei kidnapping (and here's a nice background article on Huawei from 2011, where you can see that accusing them of selling spyware has always been a way the West has competed against what has become the World's 3rd largest hardware company anyway).

Philip Davis
66.43K Followers
Philstockworld.com is the fastest growing stock and option newsletter on the Web. "High Finance for Real People - Fun and Profits" is our motto and our Basic and Premium Chat Sessions offer readers a chance to speak to Phil live during the trading day as well as authors like Optrader, Sabrient, Income Trader and Trend Trader - who send out Alerts during the market sessions and discuss trade ideas live with Members. We even have a new low-cost "Trend Watcher" Membership that lets readers view our chat sessions without directly participating a great solution for people who want to test-drive the site and profit from our experience! Trend Watchers get to view all of our Chat Archives, weekly Webinars - as well as the amazing PSW Wiki, which gives you Phil's recent opinions and trade ideas as well as technical and fundamental analysis of hundreds of stocks that we follow. Philip R. Davis is a founder of Phil's Stock World (www.philstockworld.com), a stock and options trading site that teaches the art of options trading to newcomers and devises advanced strategies for expert traders. Mr. Davis is a serial entrepreneur, having founded software company Accu-Title, a real estate title insurance software solution, and is also the President of the Delphi Consulting Corp., an M&A consulting firm that helps large and small companies obtain funding and close deals. He was also the founder of Accu-Search, a property data corporation that was sold to DataTrace in 2004 and Personality Plus, a precursor to eHarmony.com. Phil was a former editor of a UMass/Amherst humor magazine and it shows in his writing -- which is filled with colorful commentary along with very specific ideas on stock option purchases (Phil rarely holds actual stocks). Visit: Phil's Stock World (www.philstockworld.com)
Follow

Disclosure: I am/we are long UGA, USO. I wrote this article myself, and it expresses my own opinions. I am not receiving compensation for it. I have no business relationship with any company whose stock is mentioned in this article.