An inverted yield curve is seen as a sure sign of an upcoming recession, particularly due to the fact that an inverted yield curve has preceded all recessions (9 of them) since 1955. As the yield spread between 03- and 05-year treasuries dropped below zero earlier this week, Dow tumbled 799 points while the S&P 500 declined 90 points in a single trading session, both representing a collapse of more than 3%. If we are to go by empirical evidence though, there is no reason to believe that an economic recession is right around the corner. It would be irrational on the part of investors to sell all what they own just because the yield curve inverted. By all means, the yield curve was flat for the best part of this year and an inversion was always imminent.

What is behind an inverted yield curve?

Tuesday's market reaction does not come as a surprise, even though analysts have been warning of the exact same phenomenon happening for the best part of last three months. I believe investors should identify and understand what is implied by an inverted yield curve. Currently, there is a lot of emphasis on media channels as to how yield curve inversions have preceded economic recessions but there is little coverage of why this happens and the outcomes of an inverted yield curve.

An inverted yield curve depicts the underlying bond market dynamics. When bond investors see bonds with long-dated maturities safer, they tend to invest in long-dated bonds rather than short-dated bonds. This results in a lower yield for long-dated treasuries as the United States Department of Treasury can easily sell these fixed income securities to investors, even at a lower quoted yield.

On the flip side, the Treasury Department gets forced to increase the quoted yield on short-dated securities to attract potential investors. This gives rise to an inverted yield curve.

Implications of an inverted yield curve

The spread between 10-year and 2-year treasury yields is considered the de facto yield spread in assessing the underlying economic situation in the U.S. While this spread has flattened over the last 03 years, it still remains positive.

Tuesday's market rout triggered as the yield spread between 05- and 03-year treasuries reached negative territory, which can be considered as the first major warning sign of a heating U.S. economy.

One of the major implications of an inverted yield curve is that lenders would be better off lending for the short term rather than for the long-term as short-term rates become attractive than long-term rates. This creates a monumental shift in capital allocation activities and businesses with long-term funding requirements find it difficult to secure funds for their projects. While this does not happen abruptly, historical evidence suggests that this happens with time and economic activities tend to cool down significantly, which will lead to an economic recession.

The second major implication of an inverted yield curve is the stage of the business life cycle of an economy. 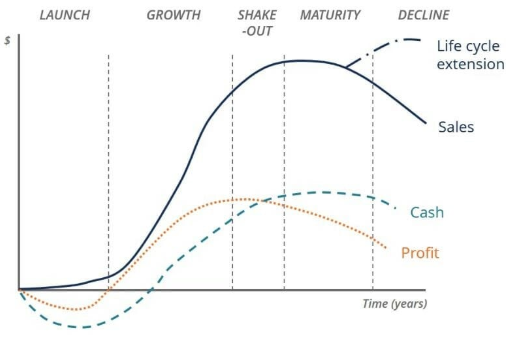 An inverted yield curve occurs when the underlying economy is reaching its maturity. Rapid interest rate hikes can only be seen in an economic environment in which high growth is driving inflation upward. 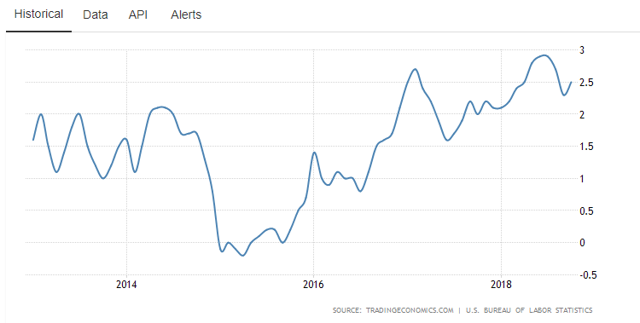 Based on the recent yield curve inversion, we can confirm the belief that the U.S. economy is reaching its maturity, slowly but surely.

The third implication is the negative investor sentiment. An inverted yield curve is the result of a negative sentiment of the short-term outlook of an economy.

While an inverted yield curve has preceded the last 7 recessions of the U.S. economy, investors are more likely to remember the bruises of the dotcom bubble and the financial crisis.

Investors should note that an inverted yield curve is by no means a cause of an economic recession. Rather, it is an indicator of a weakening, unhealthy economy that is probably growing at an unsustainable rate.

There are quite a few facts supporting the thesis of a possible economic recession in the horizon, which are outlined and discussed below.

The U.S. economy, over the last couple of years, has grown at a stellar rate. The question is whether such a high growth rate of GDP is sustainable in the long run.

The annualized GDP growth rates have risen, supported by quantitative easing that followed after the financial crisis and recent stimulus boost provided via tax reforms. The U.S. economy cannot continue to grow at historically high levels without attracting inherent risks such as high inflation, which will eventually overheat the economy. The current rate of growth might lead the economy to a recession in the near term.

When unemployment rate falls consistently, not only does it indicate a strong economy but also a possible hike in average wages in the near future, as the demand for labor outpaces the supply of labor.

Government debt has risen over the years but would be meaningless as a standalone indicator. However, the debt to GDP ratio gives an indication whether authorities would be able to stimulate the economy through monetary policy changes. When the debt to GDP ratio increases beyond an acceptable level, authorities would be less incentivized to stimulate economic activities of the nation as the debt burden would already be high. Apart from this, private debt has also been trending upwards over the last couple of years.

Although there are signs of a possible trade deal between the U.S. and China to put an end to the trade war, there is every possibility of a further escalation of this trade war, if these two economic giants fail to finalize an agreement. The trade war will especially push inflation higher if this leads to a price hike by companies that are affected by the trade war.

Home sales are a key indicator of the strength of an economy. In line with rising mortgage rates, home sales have continued to decline in the U.S., which is another sign of a weakening economy.

Home sales in the United States

It would be worthwhile to take a look at stock market returns following a yield curve inversion. Surprisingly, the stock market has continued to gain until after such an event and has peaked much later, after providing a return of around 21% on average. 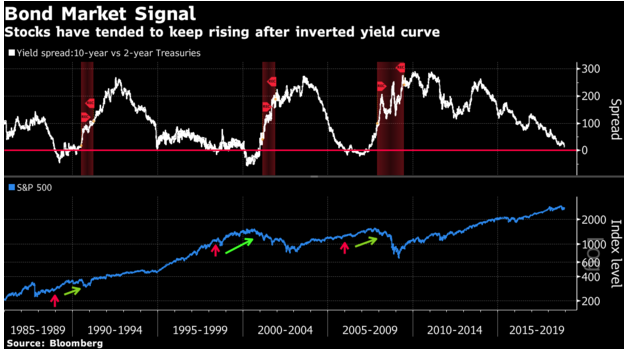 However, this is by no means an indication of a possible investment opportunity. In fact, a stock market rally even after a yield curve inversion occurs, makes investing in stocks much riskier and susceptible to a significant wealth erosion when markets pull back.

Another important metric that should be assessed is the Shiller P/E ratio.

Alarmingly, the Shiller P/E ratio is close to the levels seen during Black Tuesday, during the Great Depression.

The ratio is much higher than what was reported during the Financial Crisis in 2008 as well but well below the dotcom bubble level.

In its own right, the Shiller P/E ratio or any valuation metric for that matter cannot provide any solid direction as to where markets are headed to, but at the same time, the current stock market is by no means cheap.

During an economic recession, which might occur anytime within the next 5 years, stock markets will suffer as a whole and it would be very difficult to point out at which stocks to keep invested in. However, as a rule of thumb, it would be better to invest in companies with following characteristics.

Consumer staples industry becomes an attractive bet during times of recessions as these products are generally inelastic to price and income level.

Investors should anyways continue to have a focus on creating a diversified portfolio, which is an important aspects in achieving long-term sustainable returns.

In the period leading up to a recession or a stock market crash, investors would be better off investing in companies with an acceptable level of dividend yield and a high safety of dividends. This will allow investors to bank in when the markets crash. Slowly but surely, investors should allocate an increasing portion of their portfolio to cash, as this would serve them the best when markets are hit by the impending crisis.

An inverted yield curve does not mean the end of a bull run in stock markets but rather, provides an early warning sign of an overheating U.S. economy. Upon identifying the underlying risks of the economic outlook of America, investors should rethink their capital allocation strategies and look for ways to balance portfolios and try to achieve sound diversification benefits. Companies that are trading at extremely high price to earnings ratios should be avoided, dispute the ability of these companies to grow exponentially under healthy economic conditions. During a recession, such cyclical companies would be hit the most.

Investors need not panic at this point in time but remain focused on the underlying fundamentals of the economy, even if we see another substantial rally in stock markets in the short-term. Such a rally will make investors more prone to error due to the hoarding effect.

I am an investment analyst with 7 years of experience in financial markets. I specialize in U.S. equities and incorporate a top-down approach to identify developing macro-level trends and the companies that would benefit from such trends. I am a strong believer that the best investment opportunities could be found in under-covered equities. Please click the "Follow" button to get timely updates on new articles.

I am the founder of Leads From Gurus, a Marketplace service on Seeking Alpha that focuses on uncovering alpha-generating opportunities.

I'm a CFA level 3 candidate, an Associate Member of the Chartered Institute for Securities and Investment (CISI, UK), and a candidate in the Chartered Wealth Manager program.

During my free time, I enjoy reading.